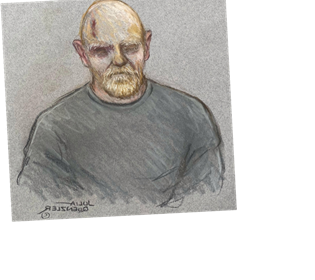 A SERVING police officer today appeared in court charged with the kidnap and murder of tragic Sarah Everard.

Wayne Couzens, 48, was held last week after police swooped on his home in Ashford, Kent.

Gun cop Couzens, who joined the Met Police in 2018, appeared via videolink from Belmarsh Prison today for his first crown court appearance at the Old Bailey.

Sarah's family watched remotely as the married dad-of-two – wearing a red sweatshirt and grey jogging bottoms, spoke to confirm his name, date of birth and address.

He appeared to have a large cut on his head and rocked back and forth during the hearing.

Prosecutor Tom Little QC told the judge there has been "a significant and wide-ranging investigation" in the case.

Couzens was remanded in custody ahead of a plea hearing on July 9 at the same court.

A provisional trial date was set for October 25 and is expected to last for four weeks.

The item of jewellery, found on top of a car park machine at a local Co-Op, was placed in an evidence bag – but it is not clear if it is connected to the tragic case.

Other officers with sticks were seen searching through a shopping trolley shelter and scanning under cars in the supermarket's car park.