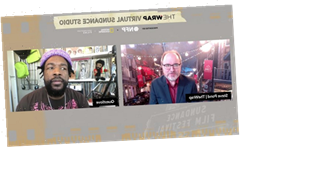 Sundance 2021: “I’d like to think of myself as somewhere between a savant and a sage of music history, how come I never heard of this thing?” Questlove tells TheWrap’s Steve Pond

“Summer of Soul,” the feature directorial debut of Ahmir Thompson, better known as Questlove of The Roots, was created with amazing unseen footage of the 1969 Harlem Cultural Festival, a landmark concert series featuring absolute legends including Nina Simone and Stevie Wonder performing for more than 300,000 fans.

The whole thing captured by professionals using multiple cameras, and then, incredibly, it was forgotten about and that footage went unused, sitting on a shelf for 50 years, until it was pulled out for this documentary. And Questlove was just as stunned as viewers of his film when he was introduced to it.

“Initially my two producers David Dinerstein and Robert Fyvolent, they had this footage kind of in the pocket for some time and they gauged my interest to see what this is something that I’d be into,” Questlove tells TheWrap’s Steve Pond at TheWrap’s Sundance Studio presented by NFP and National Geographic. “And immediately I was like well, wait a minute, what are you talking about a Harlem cultural festival? I know every important music gathering, at least I thought it did because, I’d like to think of myself as somewhere between a savant and a sage of music history, how come I never heard of this thing?”

Once the producers started dropping the lineup of the Harlem Cultural Festival, Questlove was shocked he didn’t either know or hear at least a rumor or the slightest peep about the festival.

“Then they started saying the lineup and I’m like you’re trying to tell me that there was a time in 1969 where there was a recorded documented concert with Stevie Wonder, Sly and the Family Stone, the Staple singers, and Nina Simone, and about 20 other artists of note, BB King, and you’re trying to tell me that there was a concert and I didn’t a hear a peep about it?” said Questlove. “There are a lot of things that I’ve heard about but at least heard a peep about it, and I couldn’t believe it, so instantly my ego was bruised because I was like, wait a minute, I should know about this, I know about all these things.”

When the producers finally came back with the footage, Questlove remained shocked that the footage remained under wraps for five decades. “So that got my curiosity that was the bait and then when they came back to show me the footage, I was like there was no way possible you’re trying to tell me that this didn’t at least a rumor of it getting out, that sort of thing, sure enough it’s it’s been sitting on the basement for 50 years,” added Questlove.

Watch Steve Pond’s full interview with Questlove in the embed above.

“Summer of Soul” won the U.S. Grand Jury Prize – Documentary at the Sundance Film Festival. It has since been picked up by Searchlight and Hulu.