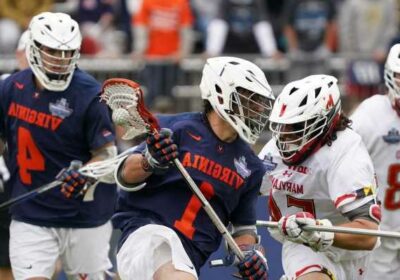 Virginia got a point blank save from goalie Alex Rode to preserve a 17-16 win against Maryland in an instant classic of an NCAA men’s lacrosse championship game Monday in front of 14,816 appreciative fans in East Hartford, Conn.

It was the second consecutive tournament title for the Cavaliers, although the last one came two years ago with the 2020 tournament canceled due to the COVID-19 pandemic.

Connor Shellenberger and Matt Moore were the stars on the offensive end for Virginia (14-4), each recording four goals and two assists. Shellenberger, a freshman, was voted the tournament’s most outstanding player as the Cavs claimed the program’s seventh championship. Logan Wisnauskas paced the scoring with five goals and an assist for the Terrapins (15-1), who came up short in their bid to be the first undefeated NCAA champ since Virginia’s 17-0 squad in 2006.

It was a game of scoring runs and wild momentum swings. Maryland built a 4-2 lead in the first quarter, but the Cavaliers notched the next six tallies to take an 8-4 lead midway through the second. The Terrapins got the next three before Virginia stopped the run to take a 9-7 advantage into intermission.

The Terrapins used another three-goal burst to pull even at 11-11 with 11:04 remaining in the third quarter. But the Cavaliers scored the next five to take their biggest lead of the game at 16-11 near the midpoint of the fourth. The Terrapins had one more run in them, scoring the next four to pull within 16-15 with 3:57 to go.

Moore’s fourth goal of the game restored a two-goal cushion for the Cavaliers, but Anthony DeMaio’s tally with 10.8 seconds in regulation gave the Terrapins one final chance. Luke Wierman won the ensuing faceoff. But Rode, the most outstanding player during the Cavaliers’ 2019 title run, made the last of his 12 saves to preserve the victory.

“It wasn’t my best game in the goal,” Rode admitted. “My defense did a great job all day, so I felt like I owed them one.”

“What an incredible experience to be part of such an exciting game,” Cavaliers’ coach Lars Tiffany said. “I fell in love with this game in 1983 when I watched Syracuse beat Johns Hopkins 17-16. And lo and behold we had the same score today.”

Indeed, the 33 goal total matched the championship game record from that 1983 finale and Maryland’s 20-13 triumph against Navy in the 1975 title game.

“We knew Maryland wasn’t going to give up,” Tiffany added. “Of course they didn’t. That’s what Maryland does. They’ve got an incredible history and an incredible present thanks to (coach) John Tillman. … We’re just really lucky to see that kind of joy on Memorial Day Monday. I’m going to enjoy every minute of this 10-hour bus ride.”

In Sunday’s women’s final, Boston College claimed its first championship in four tries in the NCAA title game with a 16-10 win against Syracuse in Towson, Md.

Charlotte North paced the Eagles (18-3) with six goals, bringing her season total to a record 102 and almost certainly cementing the Tewaaraton Award. Rachel Hall made nine saves in goal for BC, coming on the heels of her 11-save performance in the semifinal helping the Eagles upset previously unbeaten and top-seeded North Carolina. Emma Ward had two goals and an assist for the Orange (17-4), who were also seeking the program’s first women’s crown.