‘It gets better and better every year’: WCWS popularity — and local teams’ prominence — keeps rising 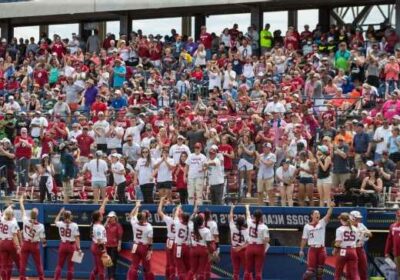 Dave Wilson is an editor for ESPN.com since 2010. He previously worked at The Dallas Morning News, San Diego Union-Tribune and Las Vegas Sun.

OKLAHOMA CITY, Okla. — Two hours before Texas and Oklahoma met in Oklahoma City, Cheryl Judkins and Karen Hendricks walked by the National Softball Hall of Fame next to the stadium that hosts the Women’s College World Series, part of a complex known as the Softball Capital of the World.

Judkins, an Oklahoma State fan, was wearing a homemade shirt that she made by cutting two shirts in half then stitching the pieces together to feature an Oklahoma Sooners logo on the front and the Oklahoma State Cowboys on the back. She sees no issue with liking both teams in the heated rivalry. The Sooners, she said, are too good to hate, because of the attention they’re driving for a sport she loves.

Hendricks and Judkins are proud lifers at the WCWS. They’ve had season tickets for decades. But, they say, it’s never been as exciting as this year.

“Oh my gosh, we had tickets behind home plate 30 years ago,” Hendricks said. “It was just Pac-10 [schools], that’s all there was. Occasionally you’d get Michigan or Wisconsin. Mostly it was Arizona State, Arizona and UCLA. We were coming way back then.”

But now her Cowgirls are here too in addition to the Sooners, who are in the midst of a historic run and shattering records along the way.

“It’s just the best feeling in the whole world,” she added. “We were talking about that on the drive over here. Not only are we getting to watch great softball, but my team’s in it. It’s just fantastic.”

The WCWS has been played in Oklahoma City since 1990, and between then and 2011, the now-Pac-12 won 19 championships. But in the last decade, the now-Pac 12 has won just once and the power has shifted to the South. Oklahoma has claimed four of the last eight titles and is a favorite to do it again this year behind the brilliant dominance of Jocelyn Alo, the sport’s all-time home run leader.

Meanwhile, the sport is exploding in popularity. ESPN’s broadcast of Thursday’s first day of the tournament averaged 901,000 viewers for Oregon State-Florida and Northwestern-Oklahoma, coming on the heels of the Texas-Arkansas super regional, which drew 1.02 million fans, the largest audience ever for that round of the postseason. Saturday and Sunday’s games were broadcast on ABC, the first time the WCWS has even been shown on network TV, which Oklahoma coach Patty Gasso said was a “wow” moment for her.

In Oklahoma City, the WCWS set a single-day attendance record with 12,533 fans on Saturday. Some, like Judkins and Hendricks, are locals and longtime supporters. But all over the stadium, young girls in town for softball tournaments roam the stadium in their jerseys to get a close-up look at their heroes.

Lily Gallardo, 12, just started playing softball last year and wanted to come to Oklahoma City for the first time, so her dad Eric drove her 5½ hours from Killeen, Texas just for the day, with her glove in tow. She scored big during OU’s 7-2 win over Texas when she jumped up and snagged a foul ball from Alo in front of her seat along the right-field line.

“I’m going to hopefully get it signed and keep it in my room,” Lily said. “I was just hoping for a moment like this.”

Alexis Clark and her nine-year-old daughter Evie drove close to four hours from Kansas to take in the action. The two stood out with Alexis’ bright orange Cowgirls shirt alongside Evie’s crimson OU tee. They have no affiliation with either team, but Alexis loves OSU pitcher Kelly Maxwell’s stoic demeanor while Evie loves the exciting Sooners, a state rivalry dividing even mother and daughter.

“We’ve been watching all season,” Alexis said. “We just love softball. It’s our whole family’s favorite sport. My husband says it’s his favorite sport just to watch every chance we get when we’re not playing softball or not running around to another sporting event.”

They purchased tickets for Saturday on a whim and then were very excited to find out they would get to see their two adopted teams. But just being there was what was most exciting.

“They’re superstars to her as much as any athlete is,” Alexis said. “She’s pretty in awe of all of them.”

“I got a high-five from Florida’s catcher, Sam Roe” Evie added proudly.

It’s a safe bet this will be their last one-day trip for the WCWS. Alexis, who has four kids between 2 and 11 years old, can’t wait to bring the whole crew back.

“Oh my gosh, I think it’s amazing,” she said. “I definitely want to bring my other kids and my husband next year because they would all love it. We’ve watched it in the past on TV but this is so much bigger than what I even imagined.”

Melissa Reeves and Missy McGee came from Arkansas. Originally, they were hoping the Razorbacks would be here too, but a Texas upset in the super regionals spoiled that. To represent, they wore T-shirts a friend had made with a Razorback logo on the front underneath the words, “ANYONE BUT TEXAS.” McGee was making her first trip to the WCWS, which earned high praise from a native of SEC country.

“I’ve never really even gotten into softball until this year,” McGee said. “But this is like a big-time football game. It’s awesome.”

Texas coach Mike White acknowledged the buzz in the stadium on Saturday night after the Longhorns’ loss to Oklahoma.

“Whenever you get someone to come and watch women’s fastpitch, they want to come back,” White said. “Now you walk past a restaurant, you’ll see the game on. People are invested in this game right now. They love it.”

Arizona coach Caitlin Lowe, who was a four-time All-American and won the WCWS as a player with Arizona in 2006 and 2007, marveled the day before the event started at how it’s continued to grow.

The rise of OSU adds even more fuel to the sport, pitting neighbor against neighbor, the kind of rivalry all fans can respect.

The budding Oklahoma dynasty hit a speed bump last month in the Big 12 tournament when the Cowgirls pulled off a colossal upset, handing the Sooners one of their two losses all season — the other was to Texas, which the Sooners avenged on Saturday — to claim the conference title.

As a result of the Cowgirls’ success, even more of Oklahoma can embrace the tournament. One OSU fan manned his two food trucks selling fried bologna sandwiches, sausage dogs and spiral potatoes behind right field. He’s so devoted he has a 6-year-old son named Boone, named after either Boone Pickens Stadium or the billionaire OSU alum whose name adorns it. He also has had dogs named Gundy (after Mike, the football coach), Pistol, (after Pistol Pete, the mascot) and Bullet (after the horse ridden by the Spirit Rider after Oklahoma State touchdowns).

His nine-year-old daughter Josalyn has played softball for years. Venable said he didn’t realize what a spectacle the WCWS was until he was invited to bring his trucks to it this year.

“It’s been an eye-opening deal for her,” Venable said. “She’s kind of been on the fence because we run cattle and she shows cattle [besides playing softball] so she’s on the fence which way she wants to go. Makes me wish I would’ve brought ’em before now.”

Being able to roam the stadium, see it before the crowds pack it and see players warm up has been an added bonus.

“Perks of being a carnie kid,” he said. “You get to come here when nobody else is here and it’s so cool to look around and really take in the moment.”

The Sooners and Cowboys seem destined for a collision course in the finals, with both winning their first two games. A Bedlam series for a national championship would be, well, bedlam.

It’s caused problems for the local teams. But they’re good problems to have.

At a tailgate for Oklahoma players’ families, Brandon Brito, father of Oklahoma’s Alyssa Brito, who grew up in California and played at Oregon before transferring to Oklahoma, looked around and was heartened by the crowds packing the stadium.

“It makes my heart warm because we’re part of a family trying to grow a female sport and show the rest of the world what it’s really like,” he said. “The outpouring of support is incredible. It’s overwhelming.”

And not even just in Oklahoma.

Kayla Baptist and Dakota Edlao were in Oklahoma City for a softball tournament all the way from their home in Maui, one of two teams from Maui in the outfield bleachers during Saturday’s Texas-OU game. The example set by Alo, a Hawaiian who is entrenched as one of the all-time greats in softball history, resonates with them.

“It’s a big thing because we share the same kind of culture and ethnicity,” said Baptist, who’s 16. “It’s cool to see somebody from a small state get to come and play big here.”

So while the Sooners have conquered America, the Cowgirls are stubbornly providing hope for others in the hometown crowd, like Venable.

He experiences the rivalry daily, mostly by living his everyday life and showing up for appointments or reservations, only to see disappointed faces when they realize he’s the wrong Brent. But with business booming and rowdy crowds every day, he’s thrilled to be part of a historic WCWS in Oklahoma City.

“My in-laws are die-hard Sooner fans, and I’m a die-hard Cowboy fan,” Venable said. “So it’s an in-house deal all the time, rivalry back and forth. [The WCWS] has been super fun. It’s a great atmosphere. I would love to see both Oklahoma teams in the finals.

“But I’m definitely gonna be rooting for OSU, not OU.”