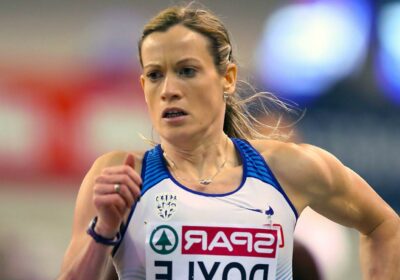 Double Olympian Eilidh Doyle has announced her retirement from athletics at the age of 34.

The Scot, part of Great Britain’s bronze medal-winning 4x400m relay team at the Rio Olympics in 2016, has decided to hang up her spikes in order to spend more time with her husband and their young son Campbell.

She posted on social media: “Athletics has all my heart, focus and love, but today, I announce my retirement as a competitive athlete.

“I take with me so many amazing memories, but most importantly, I step away happy in the knowledge that this is the right time for me to go.

I have some news to share with you all ❤️ pic.twitter.com/hjp6TVhhNJ

“I’m not saying it was an easy decision to make, but it was the right one and I am grateful I got to choose when it happened.

“The sport has brought me so much more than just medals. I have made lifelong friends, experienced incredible atmospheres, made history and even met my husband because of it.

“Now we have our wee boy, Campbell, and so much more to look forward to as a family.”

The last of Doyle’s 17 major international medals came as she helped the British team to silver in the 4x400m relay at the 2019 European Indoor Championships in Glasgow.

The Pitreavie athlete’s career haul also includes three Commonwealth silvers for Scotland in the 400m hurdles, the event at which she was crowned European champion in 2014 and for which she remains the Scottish record holder.