The primetime BBC ‘comedy’ that’s like a party political broadcast for Jeremy Corbyn: CHARLOTTE GILL is appalled by the Corporation’s Tory-bashing satire

Is there anything less funny than BBC comedy? It pledges to be ‘inclusive’ and it promises to ‘reflect a range of views’.

Yet the humour could hardly be more biased if it tried – as Andrew Neil, one of its own political presenters, put it recently: ‘When it comes to so-called comedy, the BBC has long given up on balance.’ He wrote: ‘Nobody seems to care.’

Well, I care and, having spent the last month tuning in both to its radio and television output, I can confirm he is right. Far from reflecting a range of views, the Corporation’s Tory-bashing satire is one-eyed from start to finish.

The situation is excruciating, in fact – bad for listeners and bad for licence payers, who are forced to pay for puerile Left-wing propaganda that masquerades as humour. 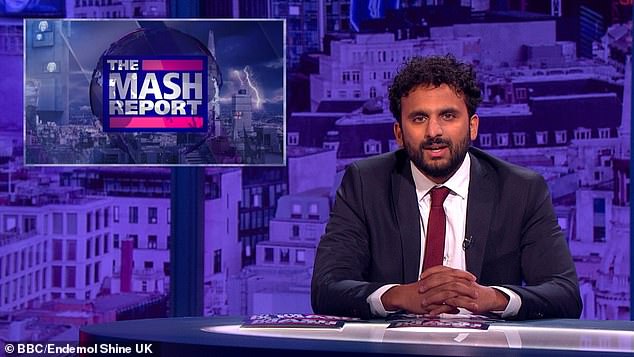 The Mash Report, featuring comedian Nish Kumar, is more like a broadcast for Momentum, the pro-Corbyn campaign group

And nothing in the schedules sums this up quite so much as The Mash Report, which goes out on BBC2 on Friday night at 10pm.

A spin-off from the satirical website The Daily Mash, it features comedians Nish Kumar and Rachel Parris and describes itself as a ‘surreal news show’.

In reality, it is more like a broadcast for Momentum, the pro-Corbyn campaign group – complete with metropolitan group think, endless virtue signalling and rooted hatred of Conservatives.

Take the jaw-dropping episode broadcast on December 7, in which a ‘news presenter’ is shown quizzing a fake ‘professor’ as follows:

News presenter: ‘This week the government was found to be in contempt of Parliament but is there anyone the Conservatives don’t have contempt for? With me to discuss the issue is Professor Henry Brubaker of the Institute of Studies. Professor, is there anyone they do like?’

News presenter: ‘They have contempt for everyone?’

Professor Brubaker: ‘They do quite like accountants and rent boys.’

Such crude denigration is not merely inappropriate, it would be disgraceful when directed at any political party. But fortunately for Left-wing and liberal politicians, the BBC spares them such insults and prefers to concentrate on Tories. 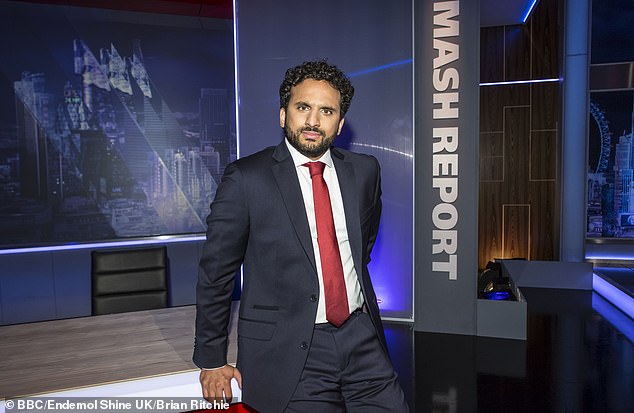 In that same edition of The Mash Report, Rachel Parris tore into Conservative MPs after they had been photographed buying groceries to give to food banks. ‘Dominic Raab, whose look could best be described as Terminator meets Young Farmers Club was… tweeting support for food banks this weekend, despite his voting record directly contributing to the need for food banks,’ she quipped.

Next, she mocked Jacob Rees-Mogg – who, as it happens, has praised food banks – joking that his ‘middle name is Compassion. Jacob William Compassion Caecilius Alfred F*** the Poor Frankincense Rees-Mogg III’.

On and on she went, attacking the introduction of the Universal Credit scheme for benefits, and bringing up the fact that ‘rough sleeping has increased 169 per cent since 2020’.

In one notably solemn section, Ms Parris abandoned all pretence at humour, saying: ‘A BBC report has shown that extreme child poverty is worsening across the UK with some children coming to school hungry and actually filling their pockets with school food. 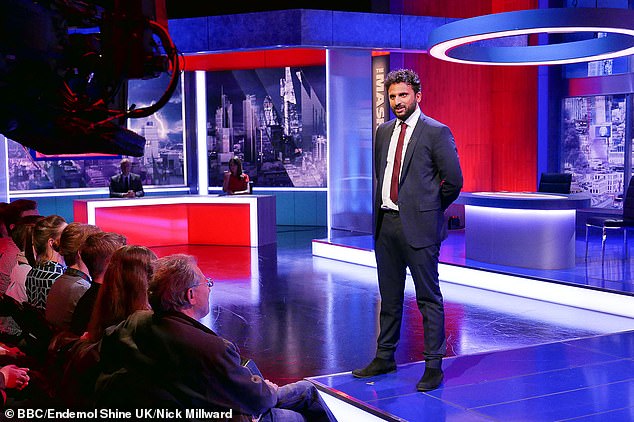 ‘One head teacher said pupils had “poor teeth, poor hair and were thinner”.

Gosh, that is a tricky one to spin for the Tories, isn’t it? Perhaps these children are members of a cool new club called Grumble Tummies or Hungry Hippos.

‘No, I’ve got absolutely nothing there. Hard not to feel anything other than fury and terrible, terrible sadness.’

It’s difficult to believe this show is advertised as funny.

Earlier episodes have been little better. In episode 5, broadcast on November 30, one of Kumar’s co-hosts attacked Theresa May’s earlier decision to appear in a televised debate about leaving the EU, suggesting she would ‘repeat the same six empty phrases while looking visibly terrified’. Never mind that May has shown personal bravery throughout one of the toughest phases of recent political history.

And his humorous comments about Jeremy Corbyn, who is hardly known for his polished performances on TV? Well, there weren’t any on that occasion, and I heard precious few in this or any other BBC comedy programme.

Two weeks earlier, Kumar pointed out the Spice Girls were reforming, but he couldn’t even do that without making a political comment.

‘I’m assuming they’re calling it the Brexit Tour,’ he said, ‘because it relies on nostalgia, assumes that minority is scary, and when it comes down to it, the posh one is nowhere to be seen.’ He addressed the news that UN Special Rapporteur Philip Alston had said that Government Ministers are in a ‘state of denial’ about poverty in Britain.

Kumar agreed with Mr Alston, of course, and took the opportunity to stage an epic rant about poverty statistics: ‘We are the sixth largest economy in the world, and yet The [Joseph] Rowntree Foundation found that, in 2015-16, 20 per cent of the UK population were living in poverty, and that is ridiculous.’

Later on he laid into the Chancellor, beginning: ‘In last week’s Budget, Philip Hammond announced the end of austerity. But that doesn’t mean anything without substantive policy change.’

Kumar’s lecture on public finances then descended to toilet humour: ‘If Hogwarts was a British school in 2018, they’d be operating a policy of one wand per class, and they’d have had to flog the golden snitch so kids could wipe their a****.’

There was no stopping him.

‘Look, after the crash in 2008 the economy was in trouble, and George Osborne combated that by cutting state spending to the bone, and lowering taxes for the highest earners and for corporations, passing the burden for paying off the recession to the poorest people,’ he continued. ‘How do you interpret that as anything other than political choice masquerading as economic necessity?’

Pointing at a photograph of former Chancellor Osborne, he said: ‘This is George. He systematically made life harder for millions of people for a decade. And if he’d given just two s**** a month, then things wouldn’t have to be this way.’ Boom boom. 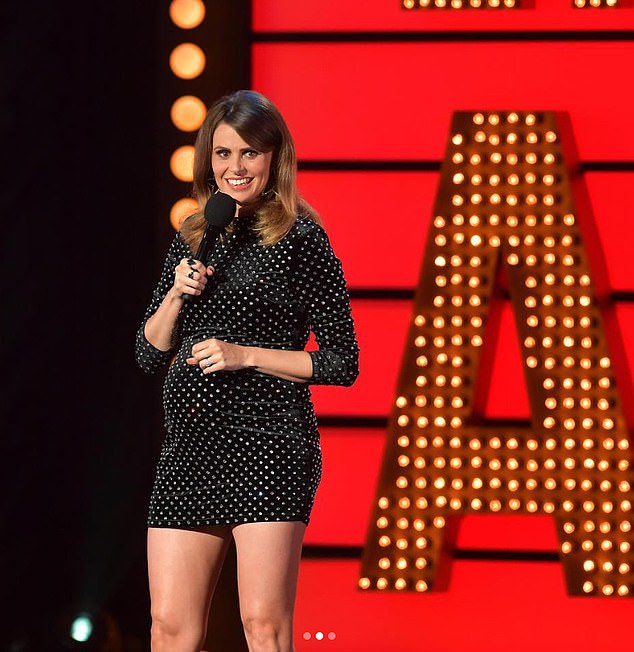 Comedian Ellie Taylor, who is pregnant, told the Live At The Apollo audience: ‘If I see a baby, I don’t feel anything. It’s like Theresa May walking past a homeless person’

Even the most ordinary members of the British public take a beating from time to time – for no good reason. There was a sketch, for example, about people who dare to enjoy Christmas-themed adverts.

One actor pretended to be a Northerner called Donna Sheridan, and another a man called Wayne Haye, both of whom were portrayed as stupid and ugly. Presumably these are the sort of people The Mash Report writers assume might vote for Brexit.

It is all the more ironic, because comedians are generally cautious in today’s PC climate. Wary of offending the right-on consensus, they avoid ageism, classism, sexism and every other kind of ‘ism’.

The sole exception is the sin of Conservatism, as the past few weeks immersed in BBC ‘comedy’ have shown me. So, if The Mash Report is the most egregious example of Left-wing bias, it is by no means alone. Tory-bashing infects the output as a whole, particularly when it comes to Brexit.

In one recent episode of Radio 4’s The Now Show, its presenter, Hugh Dennis, attacked Brexit by reading out a series of headlines from European papers.

He said: ‘With the British press possibly being overdramatic, maybe it would be better to look abroad for a more reasoned, overall perspective. So we could try Der Spiegel – “Brits staring into the Brexit abyss” – or The Irish Times – “Idiots and incompetents are in charge in the UK” ’, before concluding: ‘So, it seems pretty clear, whatever it is we’re doing the rest of the world doesn’t understand it.’

Even BBC2’s Live At The Apollo featured obvious Left-wing – and utterly tasteless – bias. Comedian Ellie Taylor, who is pregnant, told the audience that: ‘I’m still not feeling very maternal. I’m just not really programmed to coo at babies. Like, if I see a baby, I don’t feel anything. It’s like Theresa May walking past a homeless person.’

The BBC knows it has a problem. Comedy controller Shane Allen has suggested there is too much Oxbridge influence on the output. The script editor of Radio 4’s Dead Ringers has gone so far as to admit the show’s anti-Brexit bias is the product of ‘London-centred’ writers.

I’m all in favour of the BBC pursuing diversity, but surely that should go beyond skin colour and gender. What about diversity in points of view? I know it’s not easy to fix the imbalance on the airwaves.

A Conservative Government is in power and should rightly be scrutinised. But I’m not alone in believing something must be done. The Corporation’s vast budget comes with a duty of impartiality. And a good deal of the anti-Conservative propaganda on the airwaves is not merely improper, but downright offensive.

The BBC comedy schedules are no laughing matter.