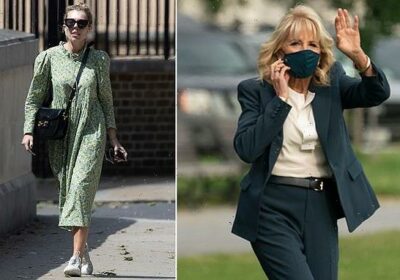 America’s First Lady will meet with newlywed Carrie Symonds during her trip to the UK this week for the G7 summit, the White House has announced.

In a statement released this afternoon, it was confirmed that President Joe Biden’s wife Jill, 70, will enjoy a visit with the new Mrs Johnson, 33, over tea on Thursday.

Jill, a university professor, and Carrie, a former Tory aide, will then tour St. Michael’s Mount off the coast of Cornwall, where the G7 summit is being held on Friday.

Last week, Buckingham Palace announced that the First Lady and her husband President Biden will also meet with the Queen at Windosr Castle on June 13. 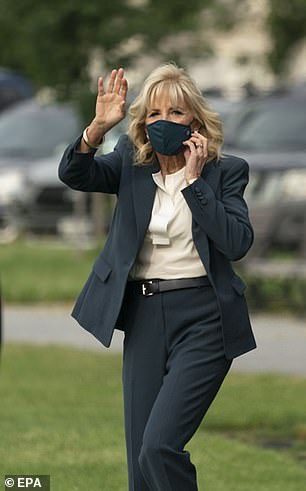 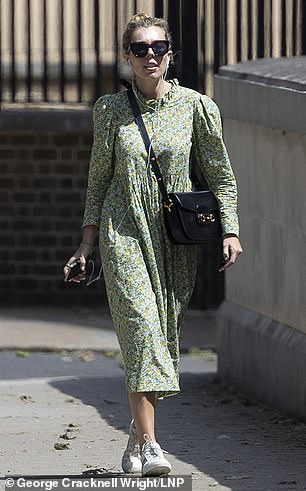 America’s First Lady (pictured left) will meet with newlywed Carrie Symonds (pictured right) during her trip to the UK this week for the G7 summit, the White House has announced 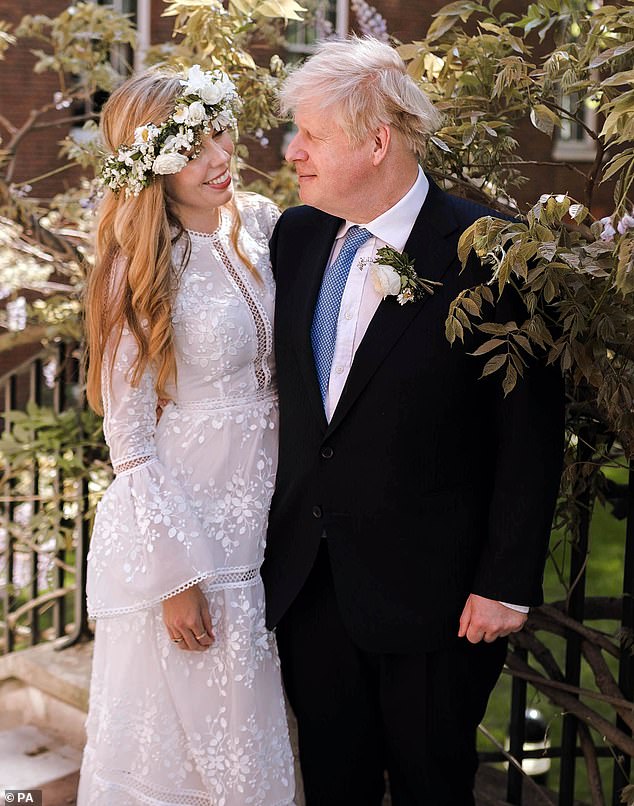 Big day!  Boris Johnson and Carrie married in a private Catholic ceremony at Westminster Cathedral on May 29, with a small group of family and friends present

‘The President and First Lady will meet with The Right Honorable Boris Johnson, Prime Minister of the United Kingdom of Great Britain and Northern Ireland, and Mrs Carrie Johnson,’ the statement from the First Lady’s office read.

‘The First Lady and Mrs Johnson will meet separately over tea and then tour St. Michael’s Mount off the coast of Cornwall.’

This weekend, when Mrs Johnson joins her new husband Boris at the G7 Summit, will be their first major engagement as a married couple. 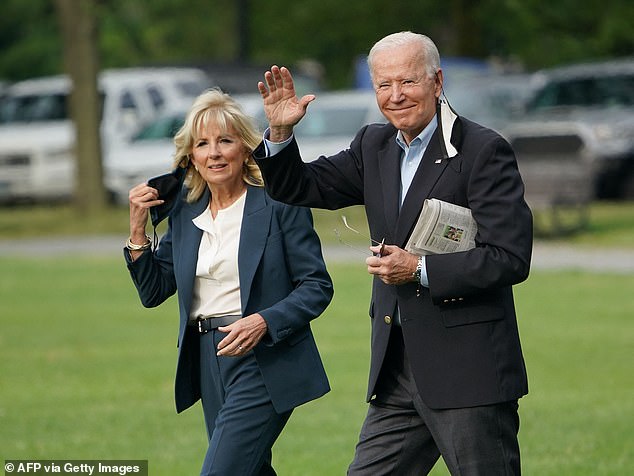 President Joe Biden and First Lady Jill left the White House on Wednesday on the way to Cornwall where they will meet Boris Johnson and attend the G7, before a meeting with the Queen

Boris and Carrie married in a private Catholic ceremony at Westminster Cathedral on May 29, with a small group of family and friends present.

US President and the First Lady’s G7 schedule: Joe and Jill Biden will meet with the Queen following summit

President Joe Biden’s first foreign trip as the US leader will feature a meeting with the Queen following the G7 summit. Here’s is his and his wife’s full schedule to June 13:

Biden and his wife, Jill, leave Washington on Wednesday morning. Their first stop in the UK will be at Royal Air Force Mildenhall to greet U.S. Air Force personnel stationed there. Mildenhall is home to the 100th Air Refueling Wing, the only permanent U.S. Air Force air refueling wing in the European theater.

Biden will meet Prime Minister Boris Johnson in Cornwall, site of the G7 summit. The First Lady and Mrs Johnson will meet separately over tea and then tour St. Michael’s Mount.

Biden will attend the G7 summit for three days starting on Friday, to work on U.S. policy priorities such as the economy and allied unity. The First Lady will take part in the G7 Summit welcoming events.

Biden will attend more G7 summit meetings in Cornwall and have bilateral meetings with fellow G7 leaders. The First Lady will participate in the program for spouses of G7 leaders.

Biden will finish his meetings at the G7 summit. Afterward, the Bidens will meet Britain’s Queen Elizabeth at Windsor Castle. Then Biden will travel to Brussels for the night.

They proceeded with a small reception in the Downing Street garden, where an official photograph of the bride and groom was taken.

The couple have already sent save-the-date cards for a wider celebration on July 30 next year.

The couple’s one-year-old son Wilfred attended the small wedding in the cathedral where he had previously been baptised.

The bride wore a rented long lace gown and a floral headband. She has taken the Prime Minister’s surname and is now known as Mrs Johnson.

It is understood Mrs Johnson was unhappy that an unofficial snap, presumed to have been taken by a guest, circulated on social media.

Downing Street declined to comment on the timing of the wedding.

Meanwhile, President Biden is scheduled to meet Prime Minister Boris for face-to-face talks tomorrow – the first time the two men will have met in person – before the summit formally gets underway on Friday.

When the summit ends on Sunday, the President and First Lady will meet the Queen at Windsor Castle.

Mr Biden will then depart for Brussels where he will attend a NATO summit and a joint US-EU summit before then heading to Geneva in Switzerland for a bilateral showdown with Russian President Vladimir Putin.

In an article for the Washington Post, Mr Biden announced that the trip is about ‘realising America’s renewed commitment to our allies and partners’ as he attempts to mend relations with Britain and the EU.

His predecessor Donald Trump engaged in a bitter trade row with the EU and slammed NATO members for failing to spend more on defence – sparking fears that he would pull the US out of the alliance.

The Republican president also angered the international community after he formally withdrew the US from the Iran nuclear deal and the Paris Agreement – both negotiated by Barack Obama. One of Mr Biden’s first acts as President was to rejoin the climate accord and reopen nuclear talks with the Islamic Republic.

Mr Biden also said that he would meet with Mr Johnson to ‘affirm the special relationship between our nations’ – a term which the British premier reportedly told the President that he hates because it is ‘too needy’.

From a university professor to a Tory aide: How Jill Biden and Carrie Johnson both fell in love with political leaders

They’re set to meet over tea on Thursday ahead of the G7 summit – but just what will Jill Biden and Carrie Johnson have in common to talk about? Here, FEMAIL reveals the wives marriages, careers and supportive roles in their husbands’ lives.

Rumours Mr Johnson and Ms Symonds were close emerged in 2018, after the then Tory communications chief offered him ‘private coaching’ to help him sell his vision for the party after Brexit.

They were later seen together at the famous London restaurant Rules on February 14 2018 – Valentine’s Day. Mr Johnson only announced his split with his wife, Marina Wheeler, on September 7, 2018.

Boris and Carrie announced last February that they were engaged and expecting a baby – their son, Wilfred, was then born at the end of April.

They now live in a flat above Number 11 Downing Street and adopted a Jack Russell-cross puppy called Dilyn.

Boris and Carrie married in a private Catholic ceremony at Westminster Cathedral on May 29, with a small group of family and friends present.

Dr Jill Biden is often described as her husband’s biggest defender and one of his most trusted political advisers.

The talented 70-year-old, born in New Jersey, has been married to Joe Biden for 43 years, becoming a stepmother to Beau and Hunter Biden, his two sons from his first marriage, after their mother and baby sister died in a car accident in 1972.

The First Lady was 24 when she met her now-husband – who was 33 at the time and serving as the Delaware Senator.

She had divorced her first husband – former college footballer Bill Stevenson – just a few months prior, and was set up on a blind date with Joe by his brother Frank, who she knew from college, having attended University of Delaware.

Joe famously had to propose to Jill five times before she accepted his offer of marriage – and the English professor later revealed that she avoided marrying him for so long because she was afraid that their union might bring too much disruption to the lives of his sons Hunter and Beau.

The couple married in 1977 at the United Nations chapel and a reception lunch at Sign of the Dove in New York City, and then took sons Beau and Hunter on their honeymoon. Their daughter was born in 1981.

Carrie joined the Tory party media machine in 2009, first as a press adviser, then head of broadcast at Conservative campaign headquarters ahead of the 2015 general election, before becoming communications chief in 2017.

However, she was forced to quit just months after being accused of abusing her expenses to the tune of thousands of pounds.

Carrie was asked to leave her £80,000-a-year role after party chiefs said her performance was poor, having previously challenged her over taxi expenses.

She declined to comment on the claims, which a close friend dismissed as nonsense and a bid to smear her by opponents of Brexit.

Carrie was the product of an affair between her father, Matthew, a founder of the Independent, and of newspaper lawyer Josephine McAfee while they were both were married to other people.

Her mother raised her in a three-bed townhouse in East Sheen, South West London, while her father provided financial assistance, though he is not thought to have played a big role in his life.

Carrie was educated at the £20,000-a-year Godolphin and Latymer School in Hammersmith, west London, which counts Nigella Lawson as a former pupil. She then went on to study theatre studies and history of art, graduating with a first from Warwick University.

In 2021, it was announced Carrie had joined animal rights charity The Aspinall Foundation as its head of communications.

As well as serving as matriarch to the Biden family, Jill has also continued to uphold her career as a teacher and professor of writing at Northern Virginia Community College while fulfilling her role as First Lady.

In 2007, she received a Doctor of Education (Ed.D.) in educational leadership from the University of Delaware.

As Second Lady, she launched Joining Forces with then First Lady Michelle Obama, an initiative to support service members, veterans and their families.

She also launched a children’s book in 2012, Don’t Forget, God Bless Our Troops, which followed the story of their family’s experience with deployment through the eyes of Dr. Biden’s granddaughter, Natalie, in the year her father, Beau, was deployed to Iraq.

Carrie has been by the PM’s side since she joined his staff in Downing Street on his arrival in July 2019.

During Carrie and Boris Johnson’s relationship, she has been credited with attempts to transform his public image, with the PM swapping his previously unruly, slap-dash outfits to a noticeably more polished look, with neatly cropped hair and a significantly slimmer waistline last year.

Jill has shown unwavering support to Joe throughout his political career, serving as his Second Lady during the eight years he spent as Vice President to former President Barack Obama.

Prior to that, she was credited with helping to ‘make her husband whole again’ after he suffered the tragic loss of his first wife Neilia and their infant daughter in a car crash in 1972.

In his 2007 biography, Promises to Keep, Joe thanked his wife for ‘giving him back his life’ and making him feel ‘whole’ again, writing: ‘She gave me back my life. She made me start to think my family might be whole again.’