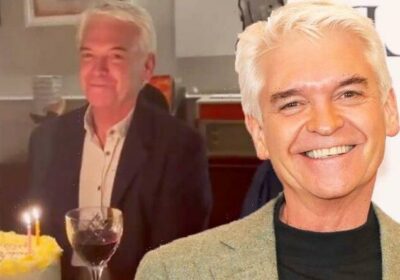 Phillip Schofield could not stop smiling as he celebrated his 60th birthday over dinner with friends as he marked the occasion alongside his wife Stephanie Lowe. This Morning presenter Phillip took to social media and shared a glimpse of one of his three birthday celebrations with his fans.

Sharing a video of himself preparing to blow out the candles on his cake, the presenter thanked his friends for joining him as he marked the milestone.

He wrote: “Day 3 of celebrations, thank you gorgeous gang.”

In a separate video, he added: “Love you guys.”

The camera panned around to reveal his wife, Stephanie, and the presenting duo Ant and Dec, among other guests who were singing Happy Birthday.

Phillip’s birthday was also brought up on Thursday’s instalment of This Morning, with the team wishing him many happy returns.

The TV star could be seen glaring at his co-star Alice Beer as she took a dig at his age while discussing the best ways to save money.

He appeared unimpressed as Alice made a jibe about him turning 60 the following day.

Mentioning ways to save money, she said: “Also look at the clubs you can join.

“Oh dear, I should never have done that should I? I was only making it up.”

As Phillip simply stared at his co-host,  Alice tried to move on.

“It’s fine,” he stated, before joking: “What a strange way to resign.”

Alice laughed: “I knew you were going to say something like that.”

Stepping into her co-star’s conversation, Holly asked: “What do you do with the thing?”

“A lot of people join the Boots parenting club so you get extra points, eight points for every £1 you spend on an own-brand product,” Alice explained.

“So there’s also the over-60s club. There’s loads of other clubs you can join.”

The team later wished Phillip a Happy Birthday as the programme was coming to an end.

“Have the best day tomorrow!”