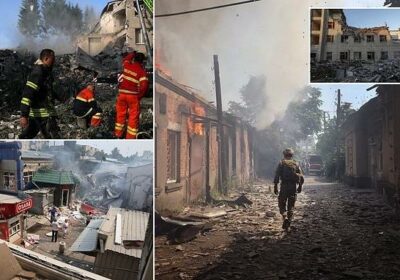 Zelensky’s starkest message for Ukraine yet as Putin takes ENTIRE Luhansk region: President warns it will be impossible to reclaim the territory without huge increase in military aid

The Ukrainian army retreated from the strategic city of Lysychansk following weeks of fierce fighting, marking a decisive breakthrough for Vladimir Putin’s men in a major flashpoint of the four-month war.

Lysychansk had been the final holdout in the Luhansk area of the eastern Donbas region and Moscow’s capture of it frees up Russian forces to advance on Kramatorsk and Sloviansk in neighbouring Donetsk.

In an address late Sunday, Zelensky vowed Kyiv would fight on and ensure the military had ‘the most modern weapons’, appealing for more long-range HIMARS rocket launchers supplied by the US.

He said: ‘It requires many negotiations, but we will ensure such a supply. Ukraine will reach the level when the fire superiority of the occupiers will be levelled.

‘The fact that we protect the lives of our soldiers, our people, plays an equally important role. We will rebuild the walls, we will win back the land, and people must be protected above all else.’ 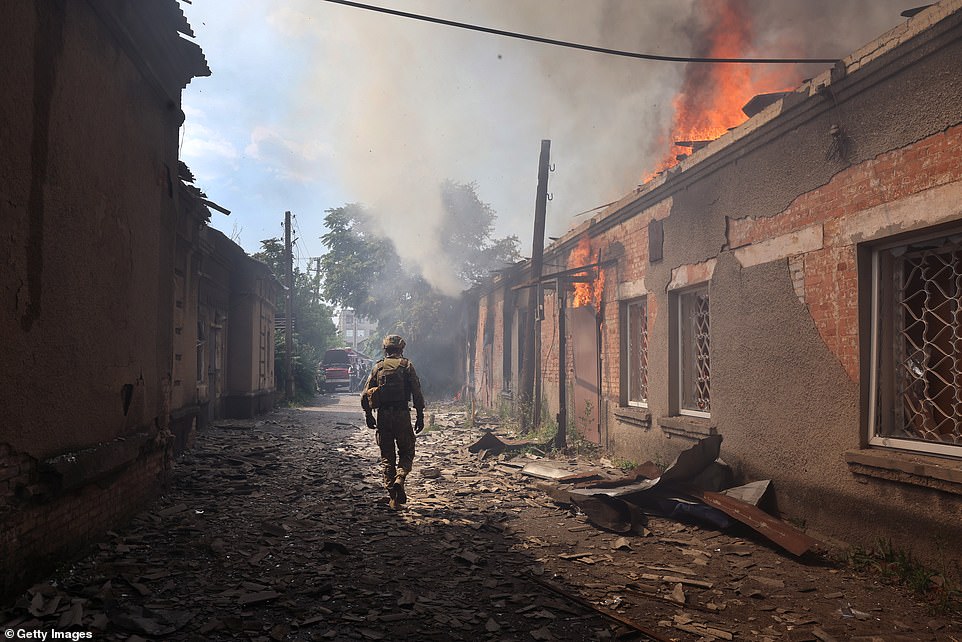 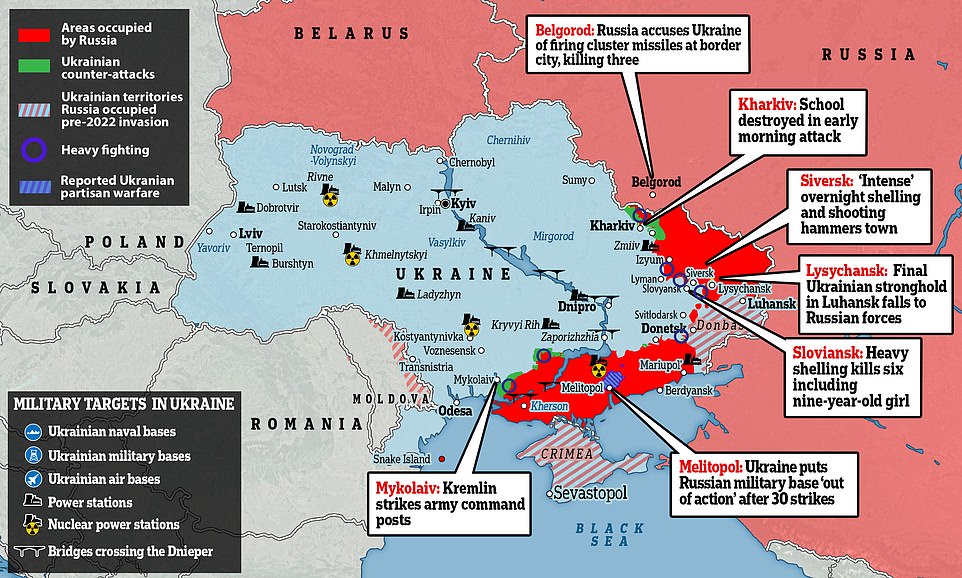 In the latest series of gains, Russia has seized the Luhansk region and has now increased its bombardment of Siversk and Sloviansk. Ukraine has been accused of targeting civilians within the Russian border city of Belgorod although this has been denied by Kyiv 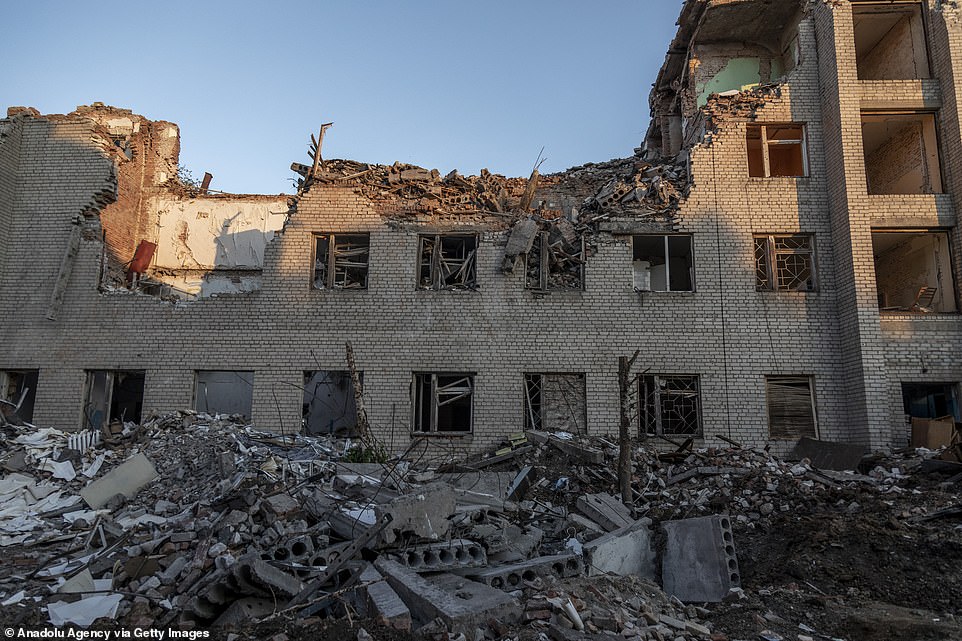 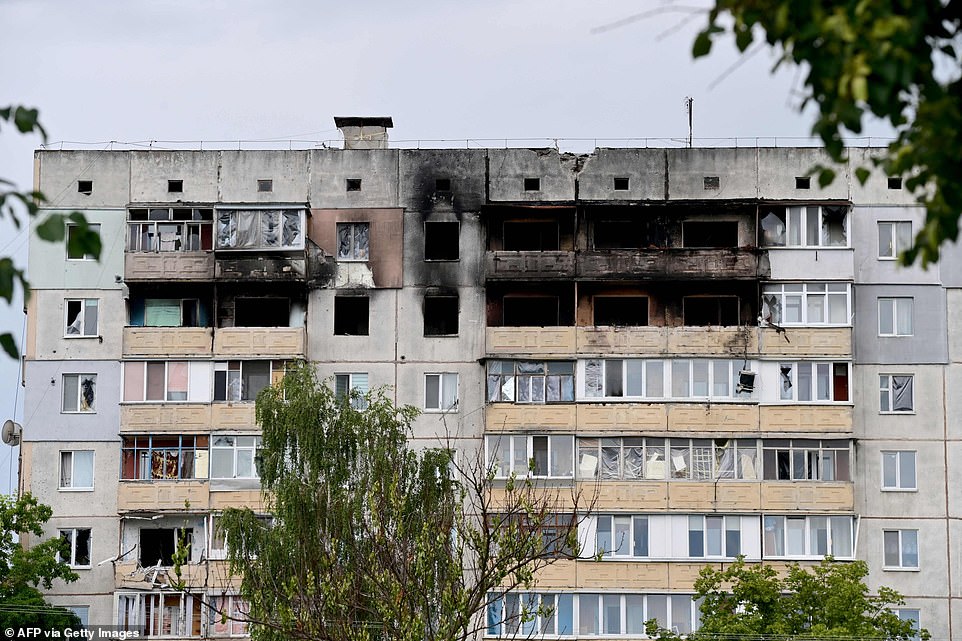 A destroyed building is seen in a residential area near Irpin, on Vokzalnaya street, which links the Ukrainian cities of Bucha and Irpin 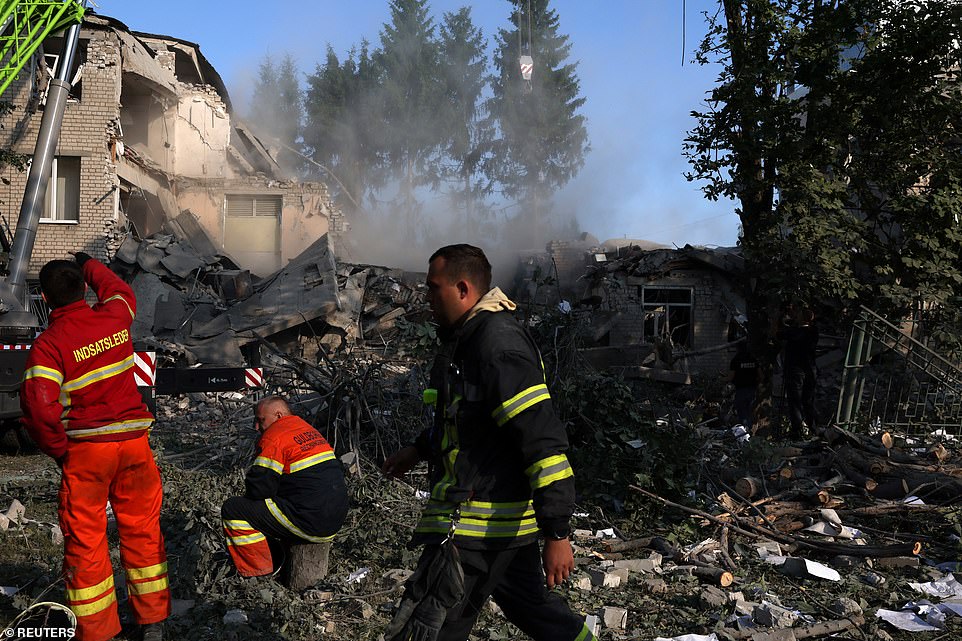 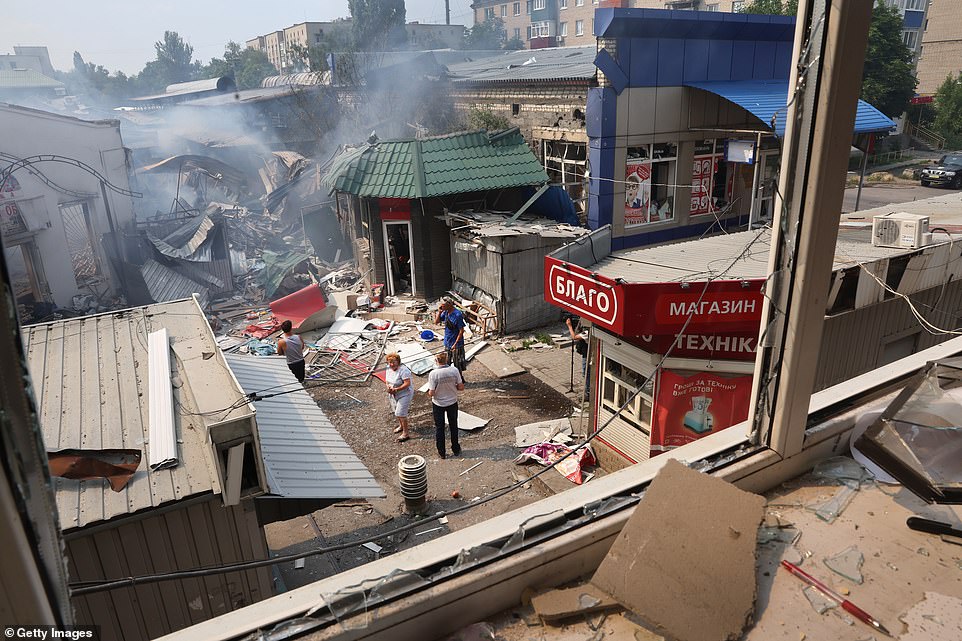 People look over the wreckage after a missile stuck a shopping mall in Sloviansk in a series of strikes on Sunday afternoon, killing civilains

Yuriy Sak, advisor to the defence minister, repeated Zelensky’s plea to the West and said the future of the war depends on the military equipment they receive.

He told the BBC’s Today programme: ‘It is a setback but it’s a setback that we will turn back in the future, we will recover Lysychansk as well as all other Ukrainian cities

‘It very much depends on how quickly Ukraine will receive all the heavy weaponry we are requesting from our international partners because in the east of Ukraine we are very significantly outnumbered and outgunned.

‘Russians are using tens of thousands of artillery rounds a day to destroy Ukrainian cities so this is why we are relying on the military assistance from our international partners and we hope this will be forthcoming as soon as possible.’

He added: ‘During the negotiations which our minister of defence holds almost on a daily basis with our international partners, we are always reassured that all steps are taken to provide this military assistance as soon as possible.’ 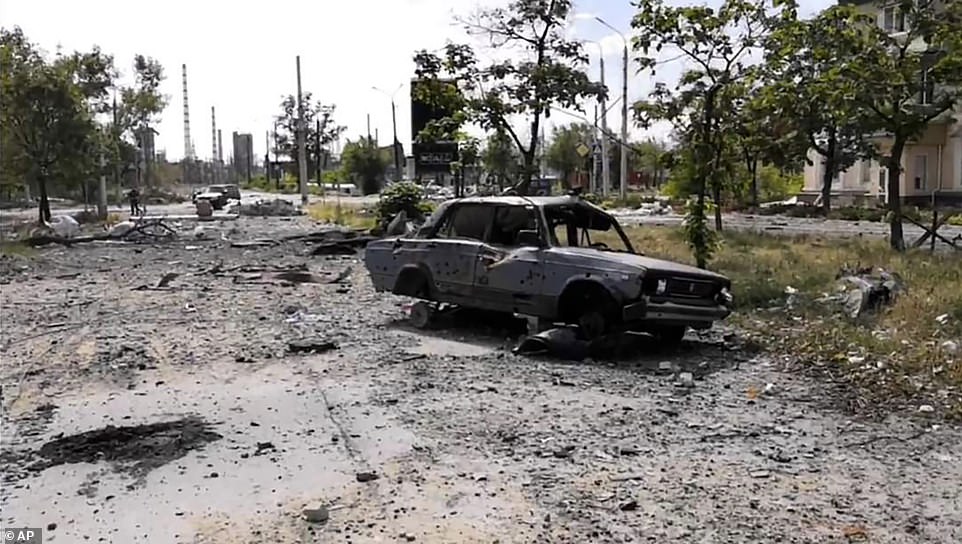 A bombed-out car sits alone on a rubble-littered road in Lysychansk, Luhansk region yesterday as Russian forces claimed the city 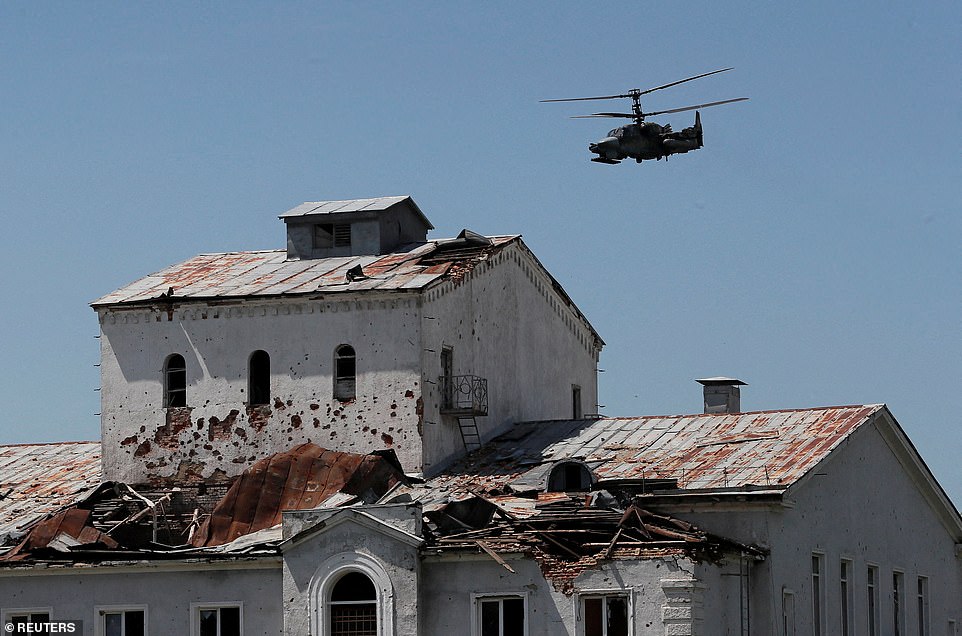 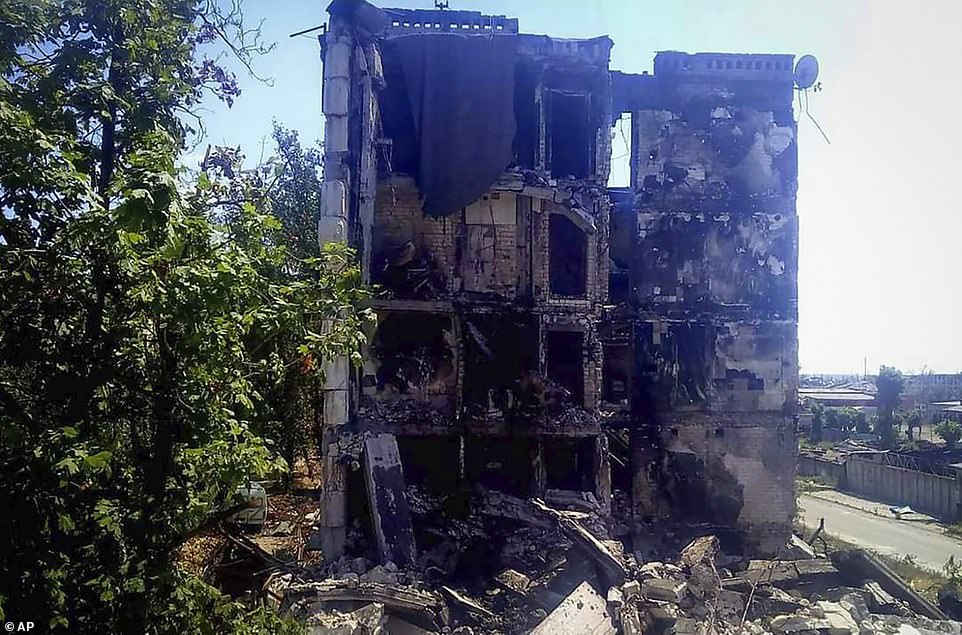 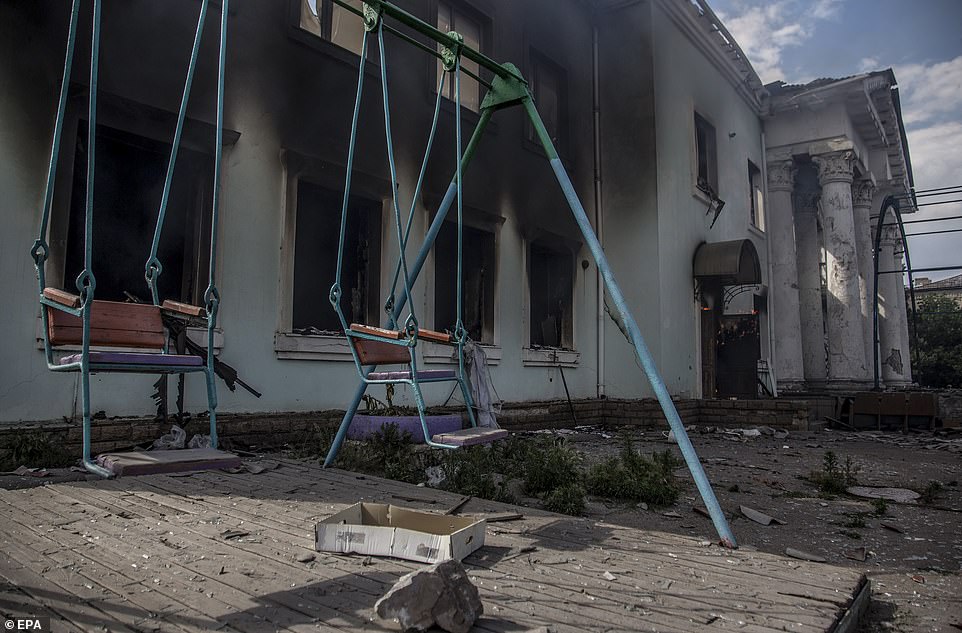 The Russians now control about half of Donetsk, the second province of Donbas, and forces are focusing their efforts on pushing toward the line of Siversk, Fedorivka and Bakhmut in the region.

The Ukrainian army said in a statement announcing its retreat from Lysychansk: ‘The continuation of the defence of the city would lead to fatal consequences’ in the face of Russia’s superiority in numbers and equipment.

‘In order to preserve the lives of Ukrainian defenders, a decision was made to withdraw.

‘Unfortunately, steel will and patriotism are not enough for success – material and technical resources are needed.’

The fall of Lysychansk comes after Russian forces seized its twin city of Severodonetsk last week after bouts of intense fighting.

On Sunday, Moscow accused Kyiv of firing three cluster missiles at the Russian city of Belgorod near the Ukrainian border, which came a day after neighbouring Belarus said it had intercepted Ukrainian missiles.

In what would represent an escalation of the conflict, Russia said its anti-aircraft defences shot down three Tochka-U cluster missiles launched by ‘Ukrainian nationalists’ against Belgorod. 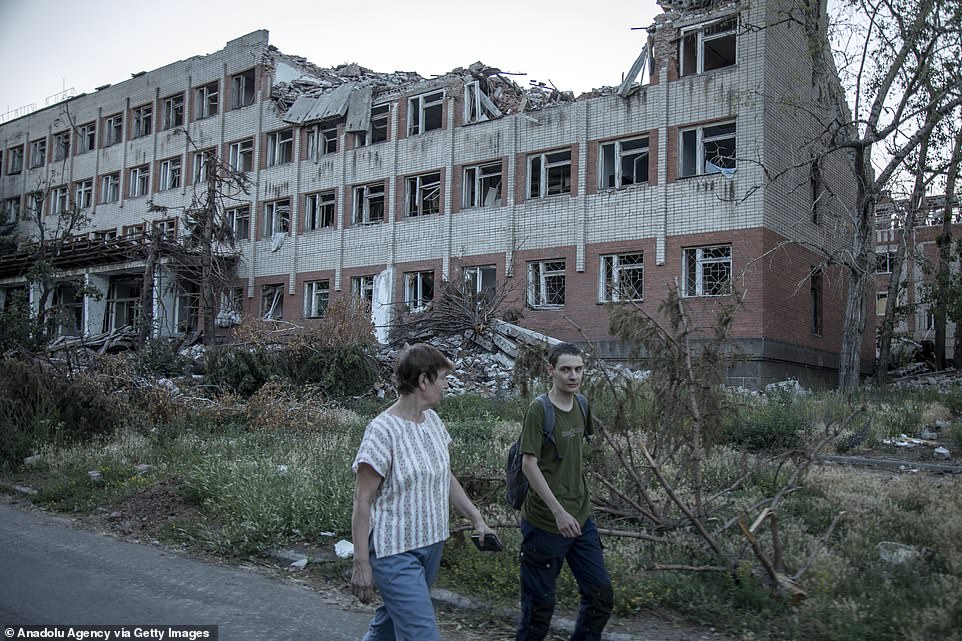 Nina Zakharova, 64-years-old librarian, and her son Alexander, 26 years-old, walk nearby a university building targeted by a missile strike in Bakhmut 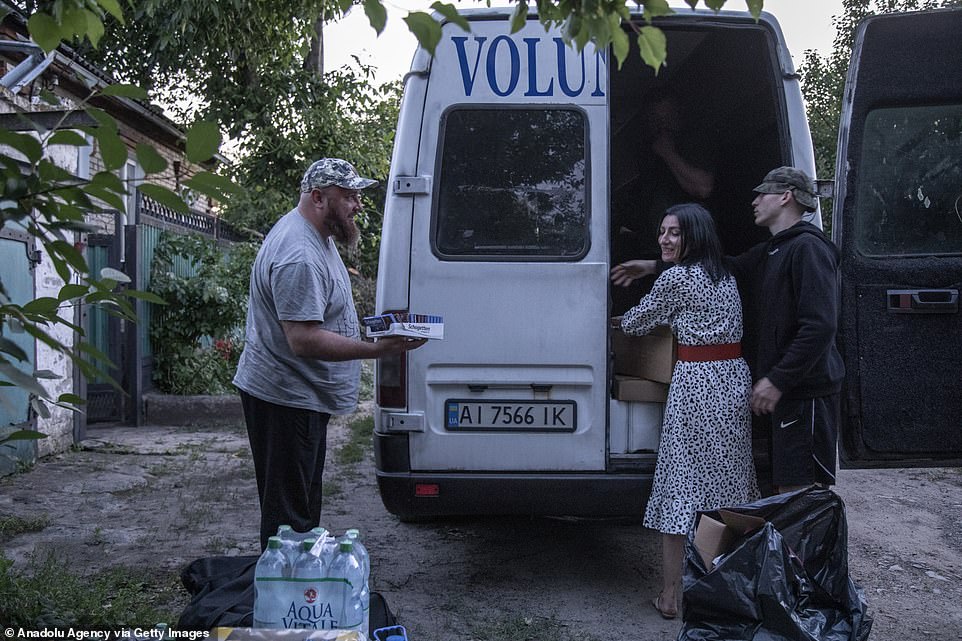 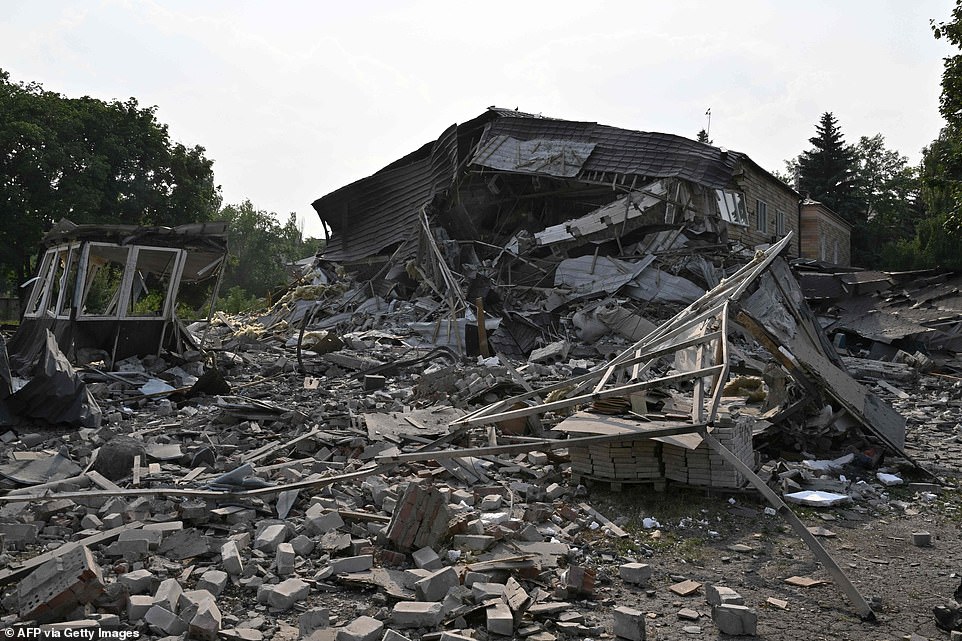 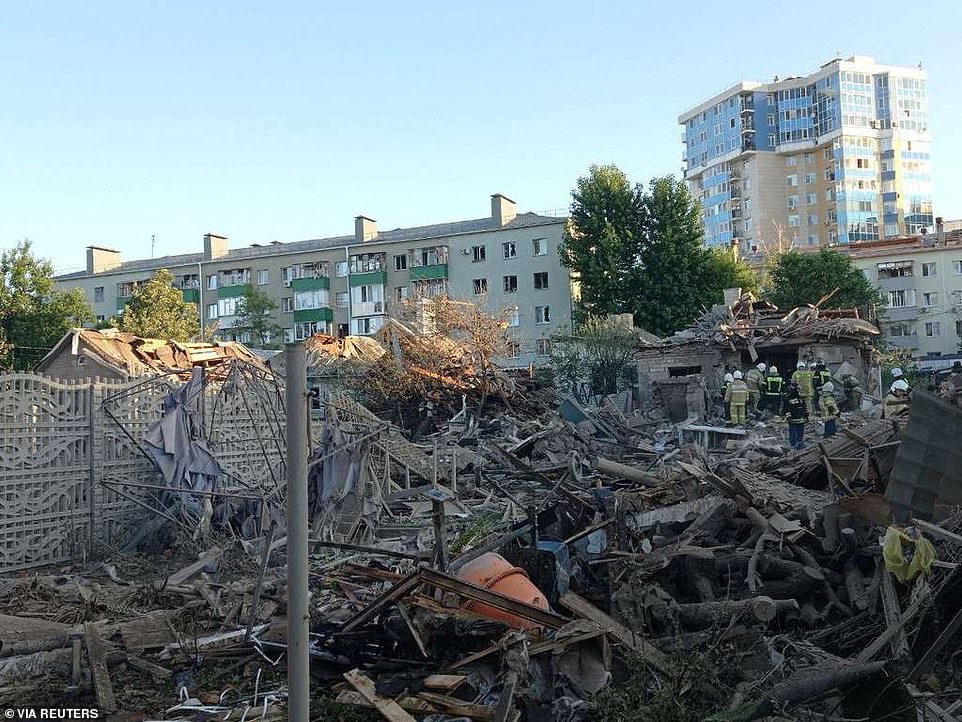 Russia has previously accused Kyiv of conducting strikes on Russian soil, particularly in the Belgorod region.

Sak denied Ukraine had deliberately targeted civilians, saying: ‘There was no official statement on the part of the general staff of the armed forces of Ukraine, but it has been very many times repeated by our military and political leadership that unlike the Russian aggressor, Ukrainian armed forces are never targeting civilian targets.

‘The reasons for those explosions could be various. In the past, we have seen that Russian armed forces are creating such provocations themselves

‘We have also seen that sometimes Russian missiles misfire so it is difficult to establish exactly what has happened.’

On Saturday, Belarusian leader Alexander Lukashenko accused Kyiv of provocation and said his army intercepted missiles fired at his country by Ukrainian forces ‘around three days ago’.

Belarus, a Russian ally, supported the February 24 invasion and has been accused by Kyiv of launching its own attacks on Ukrainian territory. 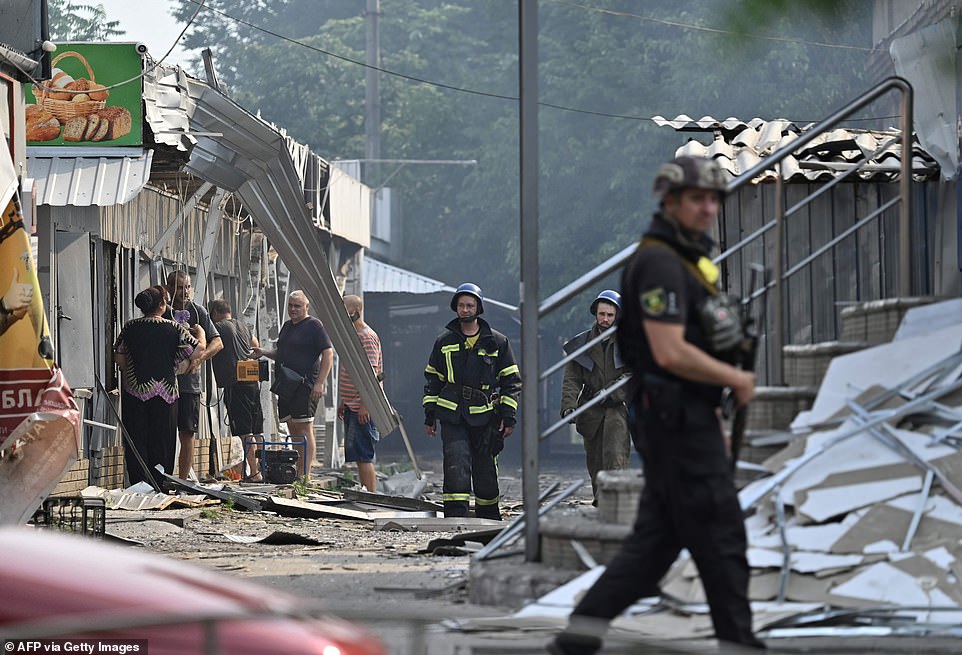 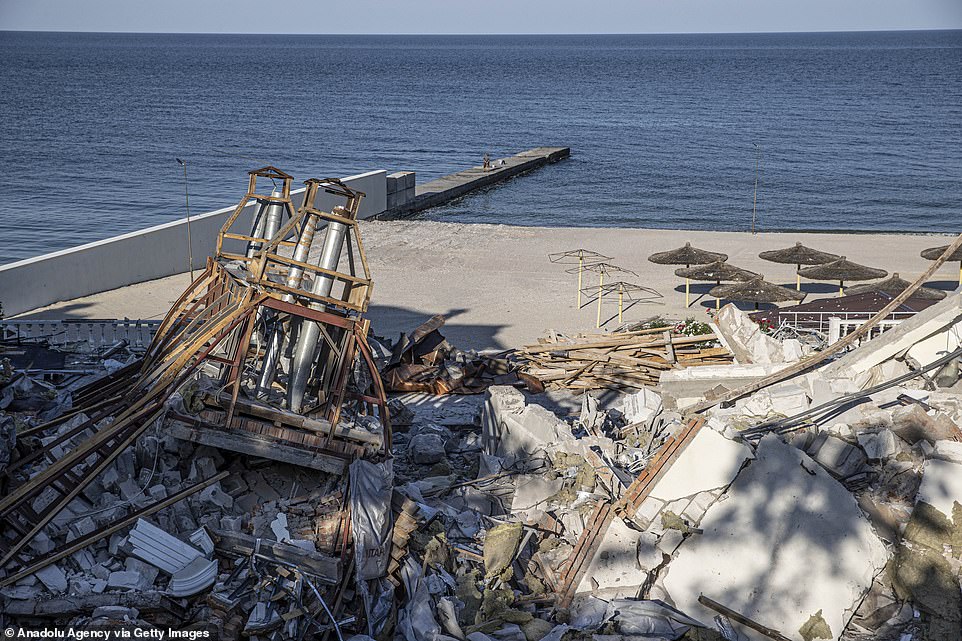 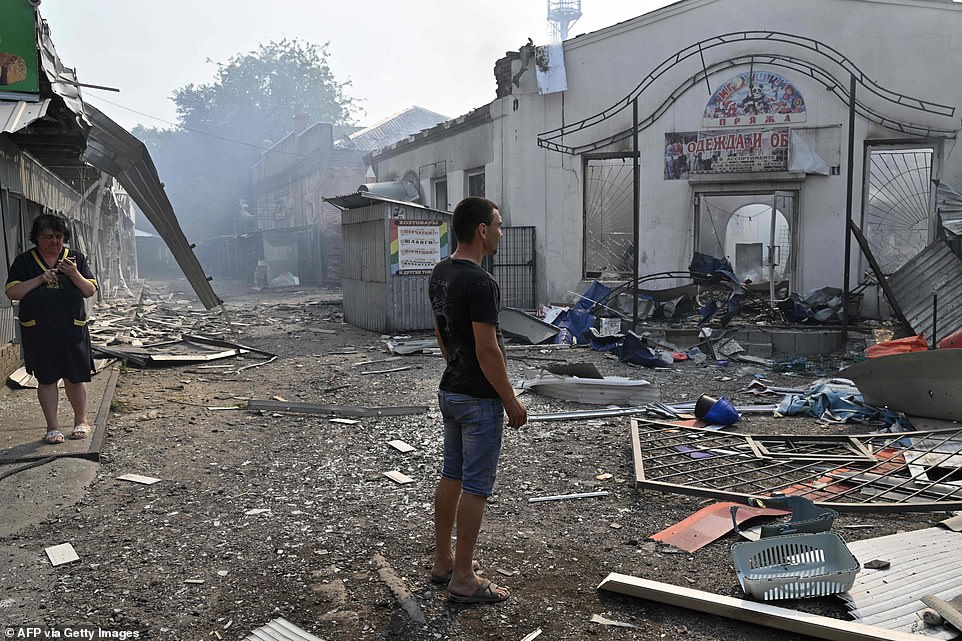 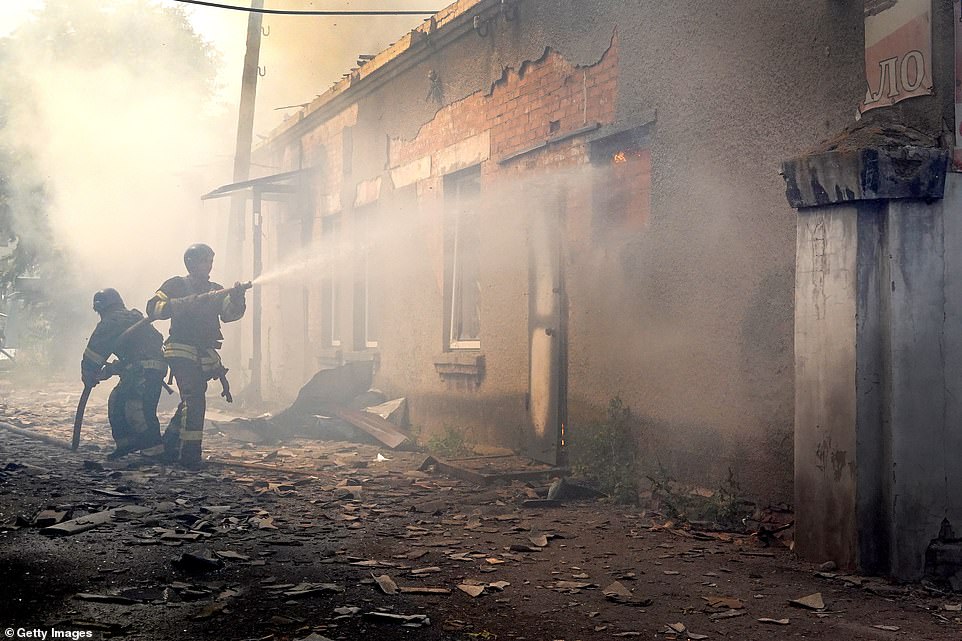 Lukashenko denied any involvement in a recent cross-border incident.

‘We do not intend to fight in Ukraine,’ he said, according to state news agency Belta on Saturday.

About 20 others were wounded as ‘the Russian army once again brutally shelled’ the city, as well as Kramatorsk and Kharkiv.

A strike on the town of Dobropillia – just southwest of Sloviansk – killed two people and wounded three, including two children, Donetsk authorities said.

‘It was intense, and it was shooting from all sides,’ said a woman sheltering in a cellar.

Russian forces ‘have now gathered their largest firepower in Donbas, and they can use tens of thousands of artillery shells every day on one section of the front,’ Zelensky said.

But Ukrainian troops had progressed in Kharkiv and Kherson regions, he added, vowing that ‘there will be a day when we will say the same about Donbas.’

‘We will rebuild the walls, we will win back the land, and people must be protected above all else,’ Zelensky said. ‘Ukraine does not give anything up.’

A Ukrainian official said Sunday that Kyiv’s forces had seen another success in Melitopol where they had ‘put out of action’ a Russian military base, while the army said the air force had destroyed around 20 Russian units and two ammunition depots.

‘The town of Melitopol is covered in smoke,’ said the city’s exiled mayor Ivan Fedorov.