Yemeni model ‘abducted from the street’ after doing photoshoot without hijab

London: A Yemeni model who posed for photographs without wearing a hijab is facing prosecution by Houthi rebels who abducted her from the streets of Sanaa, the woman’s lawyer has claimed.

Entesar Al-Hammadi, 20, was arrested in the Yemeni capital in February with two friends as they travelled to a film set, according to Saudi media reports, which said the Houthis had accused her of violating Islamic dress codes. 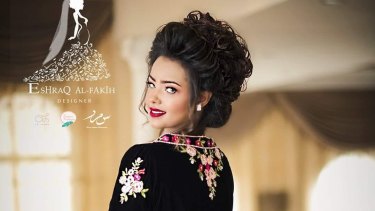 Entesar Al-Hammadi, a popular Yemeni model and actress, has been kidnapped by the Houthi militia in Sanaa.Credit:Social media

Khaled Mohammed Al-Kamal, Hammadi’s lawyer, told the news website Arab News that his client was “arrested without a warrant”.

He added that she was due to be questioned by a Houthi-controlled court on Sunday but did not give further details on the charges.

The model’s abduction was condemned by Moammar al-Eryani, the Saudi-backed Yemeni government’s information minister, in a statement on Twitter.

Eryani said the abduction was a “heinous crime,” and called on the United Nations to help secure her release. 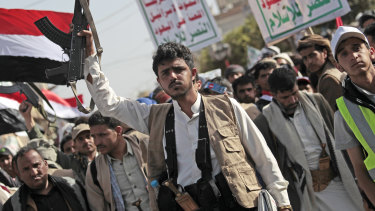 A Houthi supporter holds a weapon as he attends a rally marking six years for a Saudi-led coalition in Sanaa, Yemen.Credit:AP

He added that the model was the latest Yemeni woman to be targeted by the Houthis in a crackdown on dissent. The Houthis have not yet responded to reports of her abduction.

The Iran-backed Houthi militia controls an area of Yemen which hosts around two thirds of the population and since 2014 has been locked in a bloody civil war with the beleaguered Yemeni government.

To date, the conflict has led to the deaths of 130,000 people, including many civilians, leading to the world’s worst humanitarian crisis.

According to Saudi media reports, Hammadi is a popular model in Yemen who came to prominence after posing in a traditional Yemeni costume.

But she has also posed for photographs on social media without wearing a Hijab, in a move which appears to have angered the Houthis’ Islamist leadership.

In an interview with a Yemeni TV station last year, she said she hoped to embark on a career as an international model and actor. “It would be great if I was given an opportunity outside Yemen,” she said.