The family of a woman who was injured by a piece of falling metal at an Ohio amusement park says she is “fighting for her life” this week.

44-year-old Rachel Hawes, from Swartz Creek, Michigan, reportedly remains hospitalized in intensive care with a brain injury after an “L-shaped” metal bracket flew off the world’s second-tallest roller coaster as she waited in line.

In a statement provided to WOIO on Monday, the Hawes family said that they were “devastated” by the August 15 incident.

“We want to thank everyone for their thoughts and prayers during this time. Rachel is fighting for her life, and we would ask for privacy in this difficult time,” they wrote.

It is not yet known what caused the mid-afternoon accident that Sunday at the Toledo-based Cedar Point’s 420-foot-tall Top Thrill Dragster roller coaster. 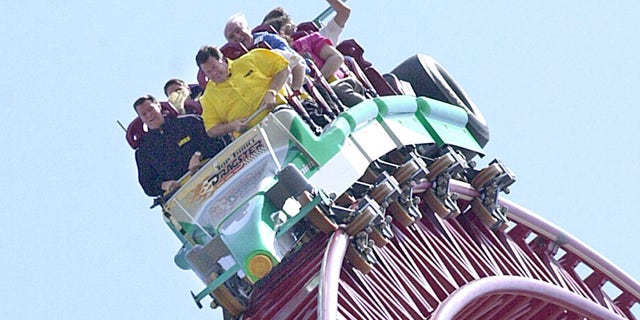 The green train on Cedar Point’s Top Thrill Dragster crests the 420-foot hill with passengers, Thursday, May 1, 2003, in Sandusky, Ohio. The ride features a launch speed of 120 mph and a 90-degree angle of descent.
(AP Photo/Sandusky Register, Daniel Miller)

According to a police report obtained by Fox News, authorities received a radio call for an injured female at 4:30 p.m. ET and the responding officer aided Cedar Point officers and emergency service personnel worked to locate medical supplies.

Hawes was initially treated at Firelands Regional Medical Center in Sandusky before being moved to a hospital in Toledo.

An Ohio Department of Agriculture report said that the roller coaster – which opened in 2003 – was last inspected in May and showed no structural issues.

The ride is required by law to be inspected twice a year, with a minimum of two inspectors performing each inspection.

The second inspection was planned for September.

In 2004, four riders were slightly injured on the coaster when metal shavings sheared off the coaster’s launch cable.

The ride will remain closed through at least the end of the year, according to Cedar Point.

“Our team has the health and welfare of our guest who was involved in Sunday’s incident at Top Thrill Dragster at the forefront of our minds. We will continue to offer our support to her and her family in this unimaginably difficult time,” Cedar Point said in an August 19 statement. “We want to fully understand what happened and why. Together with the Ohio Dept. of Agriculture’s Division of Amusement Ride Safety & Fairs, third party investigators, engineers and the ride’s manufacturer, we are being careful, methodical and thorough. We will not rush the investigation and will work tirelessly in our search for answers in the interest of improving safety.”