Woman in lover’s inheritance battle denies all three in relationship Wendy Cook, 53, was first a lover of pioneering female judge and QC Jean Southworth, who died aged 83 in 2010.

Then in 2007 she became the civil partner of distinguished doctor Jean Weddell, who died at the age of 84 in 2013.

Miss Cook not only benefited from the £1million estate of Miss Weddell, but was also left £2.5million in the will of Miss Southworth, the Daily Mail revealed this month. 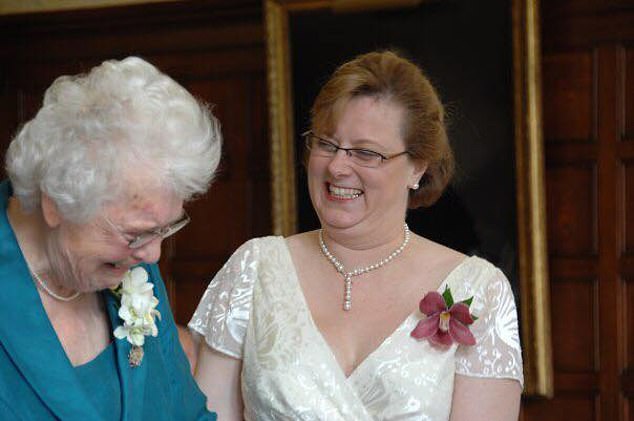 Wendy Cook, 53, pictured right, became the civil partner of distinguished doctor Jean Weddell, left, who died at the age of 84 in 2013, in 2007 and they lived on the Isle of Wight

In the final years of their lives, the two pensioners both left their London homes and wide social circles to live with Miss Cook on the Isle of Wight in the same house.

Miss Southworth’s godson Nicholas Falla spent years contesting her will in the courts. And Miss Weddell’s long-lost son, eminent academic Professor Chris Gosden, told London’s High Court that his mother’s £1million London house had been sold without his knowledge, wiping out his inheritance.

Prof Gosden, director of Oxford University’s Institute of Archaeology, claimed Miss Cook had worked to estrange him from his mother. But speaking publicly about the row for the first time, Miss Cook appeared at the High Court last week to deny acting improperly.

She claimed Prof Gosden was cut out of his mother’s will only after he told her she would be ‘put into a home’. 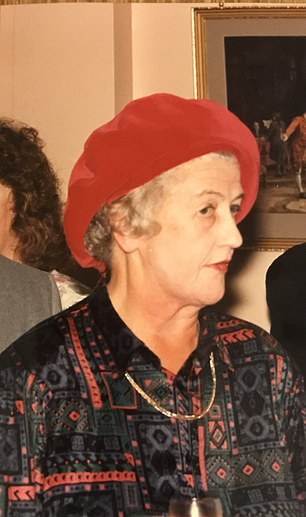 Jean Southworth was a pioneering judge and QC, who died aged 83 in 2010. She worked as a Bletchley Park codebreaker in the Second World War

Appearing for the son, lawyer Teresa Peacocke put to Miss Cook in court that Miss Weddell had not fully understood what was going on when she left London to live on the Isle of Wight with her and Miss Southworth.

She suggested Miss Cook whisked the two pensioners from London ‘so that you and those two elderly women could live away from the prying eyes and all the gossip of all the people that those women had known in their London lives’.

Miss Peacocke added: ‘You took them away so the three of you could live together without attracting criticism.

‘Jean Weddell was a woman of somewhat naive emotions, very prone to massive crushes, even at her age. When she decided to ask you to marry her, she wanted to marry you for love.

‘Her naive emotions were such that she thought that you were going to create the traditional relationship of a married couple spending their lives together.

She said she had stopped being a lover of Miss Southworth in the 1990s, and by 2006 she had become her ‘adopted ma and mentor’.

Miss Cook told the court there was ‘no continuing relationship’ on an intimate level with Miss Southworth after she entered into a monogamous civil partnership with Miss Weddell.

And she insisted Prof Gosden talked of putting his mother in a home when she first met him in 2007, months after she became intimate with the retired doctor.

Miss Cook claimed that as a result she suggested to Miss Weddell: ‘Maybe we should get married so you can protect yourself from your son.’

She went on: ‘Several days later, she said, “Are you serious, will you marry me?” I don’t know if we would have entered into a civil partnership but for that. I think she felt let down.’

They went ahead with a civil partnership in 2007. Three years later they sold Miss Weddell’s house in Kennington, South London.

They moved to the Isle of Wight – and ended up sharing one of Miss Cook’s houses there with Miss Southworth, who worked as a Bletchley Park codebreaker in the Second World War, and later helped prosecute Ruth Ellis for murder before becoming a judge.

Miss Southworth had similarly left a smart London home, in Bayswater, after Miss Cook asked her to join her in the Isle of Wight.

After her death it was sold for £2million, and Miss Cook received the bulk of her £5million estate.

Miss Cook is a barrister although she was suspended in 2014 after twice being caught drink-driving.

Miss Weddell was one of the first female students at St Thomas’s Hospital Medical School in London in 1947, and in a glittering career set up a children’s hospital in Korea in the 1950s.

She gave birth to her son just before setting off for Korea, but gave him up for adoption. He grew up in Australia, but re-established contact with his mother in 1987.

He is suing solicitors who drew up a trust which he thought ensured he and his children would inherit her estate. Miss Cook is not a party to the legal action. It was only years after her death he discovered his mother’s house had long been sold and the proceeds spent.

Miss Cook said she met Miss Southworth at the Old Bailey and their affair was kept a secret at the QC’s insistence.