Kyiv: Officials in Russian-occupied territories in eastern and southern Ukraine are forcing people to vote “under a gun barrel,” residents said amid staged referendums intended to validate Moscow’s annexation of territory it occupies.

Voting is taking place in portions of Ukraine’s Donetsk, Luhansk, Zaporizhzhia and Kherson regions and will last five days, ending on Tuesday. The outcome is not in doubt. 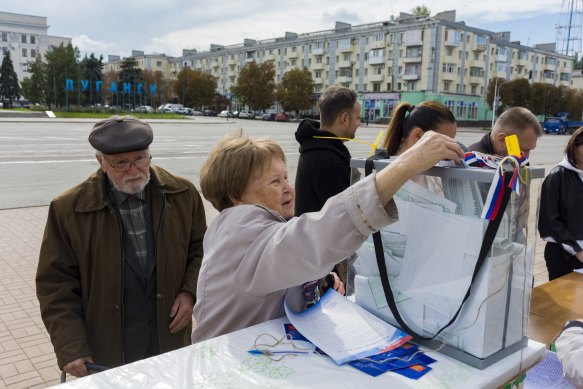 A woman casts her ballot during a referendum in Luhansk, Luhansk People’s Republic controlled by Russia-backed separatists, eastern Ukraine, on Saturday.Credit:AP

The purported referendums are illegal under Ukrainian and international law and would not remotely meet basic democratic standards for free and fair elections. Western leaders, including President Biden, have denounced the process as a “sham” to prepare the ground for Russia’s theft of Ukrainian land.

Moscow officials and their separatist proxies have said that they expect the vote to be in favour of absorbing the areas, a process that will be completed “promptly” once the results are official, according to the Kremlin.

The speed at which the referendums were announced and carried out and the mobilisation of hundreds of thousands of Russian reserves, all within one week, reflect the Kremlin’s tacit acknowledgment of its deteriorating position in Ukraine. After invading Ukraine on February 24 and failing to take the capital, Kyiv, Russian forces have been pushed back in the country’s north-east and are coming under pressure along the front lines of the war.

Hundreds more people were arrested on Saturday during demonstrations in Russia against the mobilisation. 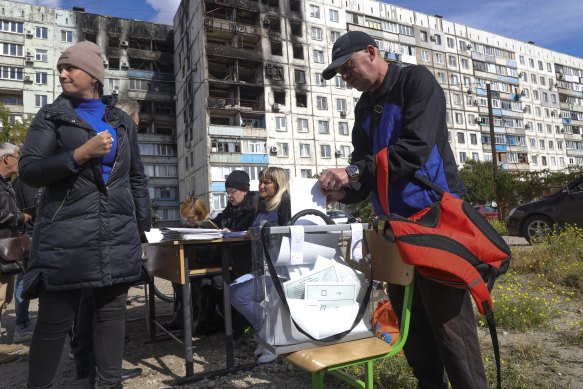 People vote at a mobile polling station in Mariupol, which is controlled by Russia-backed separatists.Credit:AP

Ukrainians who are in contact with friends and relatives in the occupied territories describe groups of men armed with Kalashnikov rifles, accompanied by a person with a portable ballot box, going door-to-door in apartment buildings and houses.

“The referendum is taking place in the occupied city of Kherson under the muzzle of an automatic rifle,” said Galina Luhova, head of the Kherson City Military Administration, who now lives in Ukrainian-controlled territory. “They ring the doorbell of apartments, knock down the doors of those who don’t open them and demand that people come out and put a mark that they agree to join the Russian Federation.”

Luhova said she spoke to 11 people still living in the Kherson region who told her that they pretend they are not at home, or leave their apartments for extended periods, while the armed groups make their rounds. “People are frightened,” Luhova said.

Serhii Nikitenko, a Ukrainian journalist who said he’s spoken to three friends over the last two days, said that mobile groups also visit schools, hospitals and other workplaces where officials “can collect a certain number of votes.”

Zelensky also said that occupation authorities had begun to mobilise local Ukrainians to fight against Kyiv forces, a prospect that Ukrainians should avoid “by any means”.

If they do end up drafted, however, Zelensky called on them to “sabotage any activity of the enemy, hinder any Russian operations, provide us with any important information about the occupiers” and, at the first opportunity, “switch to our positions”.

Meanwhile, the “partial mobilisation” of Russian men to bolster beleaguered troops in Ukraine, announced by Putin this past week, appeared to be encountering obstacles.

Numerous videos have emerged of newly minted draftees staggering around drunk, throwing punches, shouting at military officers, cursing when told to form lines, and in Primorye territory in the Far East, swearing at the rusted-out Kalashnikovs they were handed.

On Saturday, Ramzan Kadyrov, the head of Chechnya and a close Putin ally, appeared to acknowledge the problem of the poor quality of recruits, saying that half of Russia’s 5 million police and law enforcement officials should be drafted instead.

Also on Saturday, at least 740 people were arrested in protests throughout the country, according to rights monitor OVD-Info, with further protests expected in Moscow and St Petersburg. A military enlistment office in the Krasnoyarsk region, according to local media outlet ChP Kansk, was one of at least 10 attacked in cities and towns across Russia since mobilisation was announced.

At the same time, Putin signed a law toughening penalties for desertion and “voluntary surrender” during military operations. He also fast-tracked Russian citizenship for foreigners who joined the fight against Ukraine – a move designed to appeal to the many migrant workers in Russia from former Soviet Central Asian countries. On Wednesday, however, those countries’ Moscow embassies issued warnings to their citizens that it was illegal to participate in a foreign war.

Ukrainian officials said that their armed forces continued to make gains in the country’s south and east, though that information could not be verified because journalists are barred from reporting from frontline positions.

On Friday, Zelensky said that Russian forces sent Iranian-made drones to attack the Dnipropetrovsk region in Ukraine’s south-east and the city of Odesa on the Black Sea. Previously, US officials said Tehran had supplied combat drones to Russia.

Zelensky promised a “tough response” and “corresponding consequences” to the “collaboration with evil.” On Friday, Ukrainian officials announced they had stripped the Iranian ambassador to Ukraine of his accreditation and moved to significantly reduce the number of personnel at the Iranian embassy in Kyiv.

Tehran officials said on Saturday that they regretted the Ukrainians’ move, which they said was based on “unconfirmed reports” and “media manipulation.”

As the staged referendums proceeded, Russian officials attempted to lend the process an appearance of legitimacy, following a playbook that they have used in previous orchestrated votes, such as a similar staged referendum setting up Moscow’s annexation of Ukraine’s Crimean Peninsula in 2014.

Russian media showed images of people lined up outside voting stations, but Ukrainian officials said that they had either bused in from elsewhere or were soldiers wearing civilian clothing. So-called “international observers” gave their blessing to the proceedings. One of them, Eliseo Bertolasi from Italy, observed the 2018 general elections in the Donetsk People’s Republic, the unrecognised Moscow-supported separatist state in eastern Ukraine.

After one day, election officials said that about 15 per cent of the total electorate in the Russian-controlled regions had voted, Russia’s RIA Novosti reported.

Luhova said her contacts “cried and cried and cried” because of what was transpiring: the staged referendum and the prospect that Russia would try to absorb the region.

“Russia is trying to paint a situation that doesn’t exist in Kherson,” she said. “People just clenched their teeth and clenched their fists, waiting for the armed forces of Ukraine to free the city.”