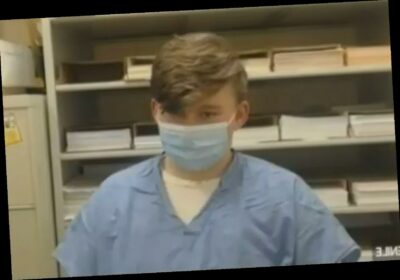 A Wisconsin teenager is being charged as an adult after he allegedly killed is infant daughter.

Logan T. Kruckenberg-Anderson, 16, was charged Tuesday with first-degree intentional homicide and hiding a corpse by the Wisconsin Attorney General, the state's Department of Justice announced this week.

Kruckenberg was arrested by the Green County Sheriff's Department on Sunday, and is currently being held at the Rock County Juvenile Detention Center on a $1 million bail, the Wisconsin State Journal reported.

The teen stands accused of shooting his infant daughter and then burying her in the snow.

According to a complaint filed Tuesday, the baby, who the mother named Harper, was born on January 5 at her home in a bathtub. The mother told police that she and Kruckenberg-Anderson agreed that Kruckenberg-Anderson's friend Tyler — whom he had met on Snapchat and didn't know his last name — would take Harper to an adoption agency in Madison.

Kruckenberg-Anderson initially told police that he gave Tyler $60 to take Harper to the adoption agency, but later stated that he and the baby's mother decided he would "get rid of the infant by simply dropping it somewhere," the complaint said.

The teen then put Harper in a backpack and left the mother's house, he allegedly told authorities. He then walked to his mother's house several blocks away, and transferred the baby into a bigger backpack, according to the complaint.

"As Kruckenberg-Anderson left the residence he heard the infant child crying so he bounced up and down on his heals to sooth the infant," the complaint said. He went to a "remote wooded area" in Albany and placed Harper, who didn't have any clothes, "into a small area inside a fallen tree," according to the complaint.

Kruckenberg-Anderson allegedly told police that Harper started to cry, and he "placed snow over the entire body of the infant and walked away." He could still hear Harper crying as he left, "which caused him to emotionally break down, fall to his knees and cry," the complaint said.

"Kruckenberg-Anderson stated that he knew that by leaving a nude infant child exposed and covered in the elements would likely cause the baby to die," the complaint said.

After the teenager allegedly told detectives where he had hidden Harper, officers found her on Sunday — discovering that she had also been shot in the head.

A Wisconsin State Crime Lab employee who examined the child said, according to the complaint, that Harper was "likely alive or recently alive" when Kruckenberg-Anderson covered her in snow.

Speaking again with detectives after Harper's gunshot wound was discovered, Kruckenberg-Anderson "admitted to placing the baby into the snow-covered area in the tree and shooting the baby twice in the head with a firearm," the complaint said.

A spent shell casing that matched the one found by Harper was also found in Kruckenberg-Anderson's backpack, according to authorities. The complaint further alleges a juvenile witness told detectives that Kruckenberg-Anderson had given him a firearm on January 8 and detectives found "the firearm caliber was consistent with the casings and fired projectiles located by law enforcement and crime laboratory personnel."

A preliminary hearing for Kruckenberg-Anderson is scheduled for January 20, the Wisconsin State Journal reported. Public defender Guy Taylor did not immediately respond to PEOPLE's request for comment.