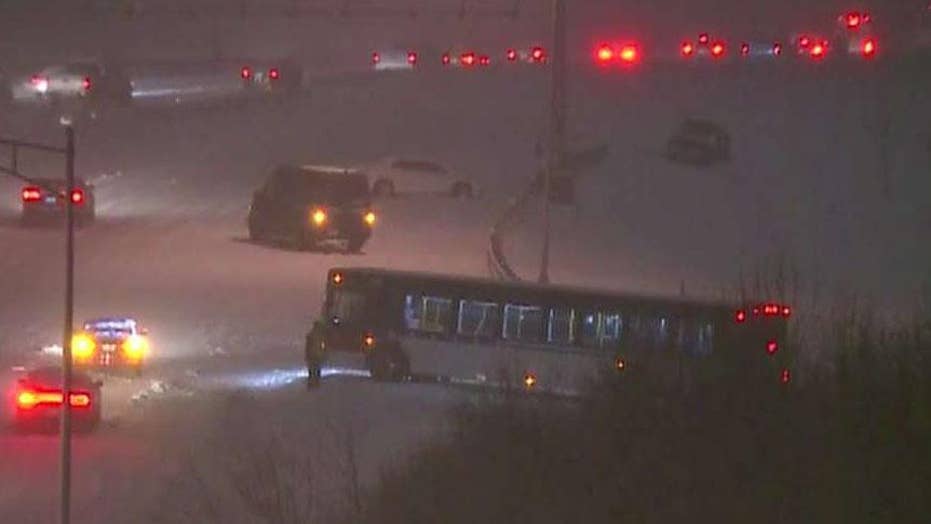 7 killed in snow-related crashes as a winter storm hits the mid-east, dropping 17 inches of snow

A powerful winter storm that has left at least 7 dead and spawned winter weather alerts spanning 1,500 miles is targeting the nation's capital on Sunday, bringing the region its biggest amount of snow so far this season.

"To the south, freezing rain is expected into Sunday near and east of the central and southern Appalachians, where up to a quarter of an inch of ice could accrete, with locally higher amounts possible," the NWS's Weather Prediction Center said.

MONSTER SNOWSTORM TO SPAN HALF THE US

The storm moved into Kansas and Nebraska from the Rockies on Friday, then east into Missouri, Iowa, Illinois and Indiana, covering roads and making driving dangerous. 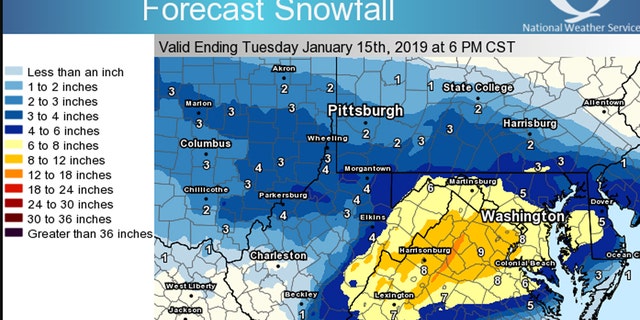 Between 5 to 10 inches of snow is expected to fall in the Mid-Atlantic on Sunday.
(National Weather Service)

Part of Interstate 44 near St. Louis was blocked for several hours Saturday, and at one point the Missouri State Highway Patrol warned of traffic delays as long as eight hours.

Authorities in Kansas said at least 3 people died in crashes on slick roadways, while at least 4 deaths were reported by authorities in neighboring Missouri.

"PLEASE DO NOT TRAVEL," authorities warned Saturday on Twitter. "While roads are improving, many are still snow covered."

As the storm headed east, states such as Maryland and Ohio declared snow emergencies to limit travel. 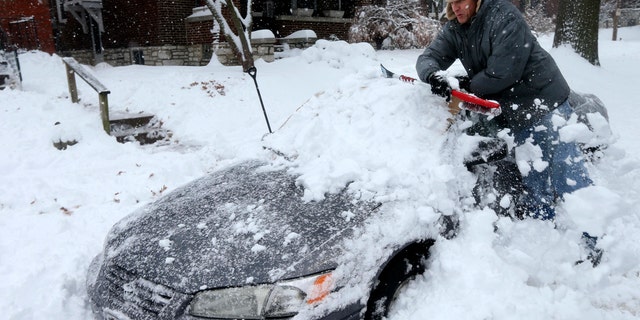 Jeff Clifford digs out his girlfriend’s car from a pile of snow on Saturday, Jan. 12, 2019, in St. Louis.
(Laurie Skrivan/St. Louis Post-Dispatch via AP)

Virginia Gov. Ralph Northam also declared a state of emergency Saturday night in order to allow the state to be better prepared to respond to the storm.

AT LEAST 5 KILLED IN CRASHES RELATED TO POWERFUL WINTER STORM

Missouri had gotten the worst of the storm by Saturday, with the National Weather Service reporting more than a foot of snow Saturday morning in some places around St. Louis and Jefferson City, and more than 18 inches in Columbia. 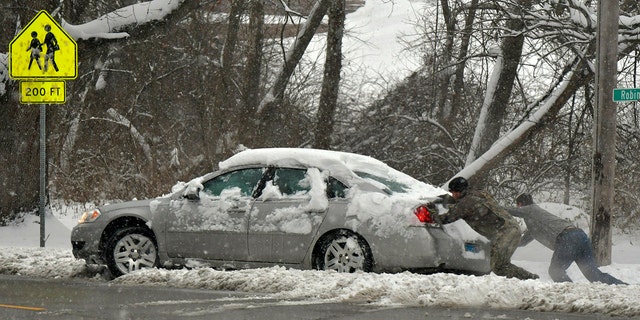 Multiple deaths on snow-slicked roads were reported in the Midwest as a winter storm swept the region this weekend, snarling traffic in several states and leaving thousands without power.
(Tim Vizer/St. Louis Post-Dispatch via AP)

"We're anticipating still more snow through today, so we're asking motorists to stay home until the roads are cleared," Missouri State Highway Patrol Sgt. Collin Stosberg, stationed in suburban Kansas City, told the Associated Press. "If you do have to get out on the road, we're asking you to do three things: Have your cellphone fully charged, wear your seat belt and slow your speed for the conditions." 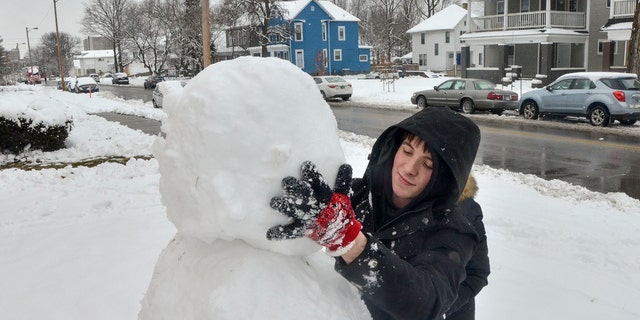 Blake Wise applies the head of the snowman that he and Brianna Atwood built along South 7th Street in Terre Haute, Ind., on Saturday, Jan. 12, 2019.
(Austen Leake/The Tribune-Star via AP)

At Lambert International Airport in St. Louis, most flights were canceled or delayed on Saturday.

In central Missouri, officials said about 12,000 households and businesses were without power in Columbia and the surrounding area at one point.