Home » World News » Why vaccine mandates must be a last resort

Why vaccine mandates must be a last resort 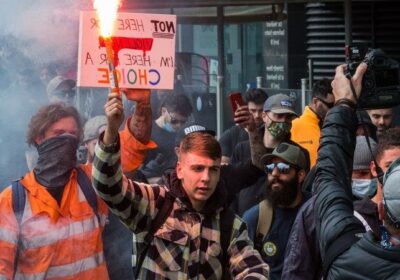 I spoke in recent days with two women who feel strongly that they do not want the COVID-19 vaccination. One works in construction, the other as a teacher. Both are likely to get vaccinated – under duress – because they cannot afford to lose their jobs. The JobSeeker payment wouldn’t cover their rent.

When it comes to vaccination policy, there are a number of more and less severe approaches the state can take. We can think of a ladder, starting at persuasion (including education campaigns), and moving through nudging, to financial incentives, to disincentives, and finally outright compulsion. Mandatory vaccinations are technically in the class of disincentives, but applied as prerequisites for working they come dangerously close to outright compulsion, in that they threaten people with their career and livelihood if they are not willing to comply. 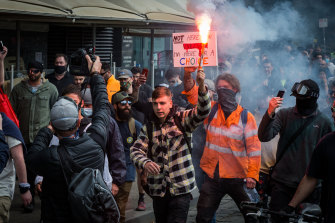 Coercing those reluctant to get vaccinated may backfire.Credit:Getty

It would be easy to dismiss objections to mandatory vaccinations as coming only from right-wing conspiracy theorists, which some commentators have tried to frame the Melbourne protests as being. But this is intellectually lazy. It ignores the legitimate objections people might have, and the hard questions of how we can best address these, as a liberal, democratic society.

I have had the first jab of Pfizer and am waiting for the second. I am happy to follow the medical evidence, which tells us that the health risks from COVID vaccination are extremely low, and the social benefits high. The vast majority of Australians appear to agree. We are on track to vaccinate 80 per cent of the population aged 16 and over by year’s end, and much sooner in NSW.

But there’s a huge difference between vaccinating the willing and coercing the unwilling into vaccinations by threatening their livelihoods. How readily – how unquestioningly – should we accept state coercion and compulsion as legitimate tools of public health administration, especially when we have not exhausted the less invasive options?

The World Health Organisation, for one, has an answer. Delivering its policy brief on mandatory vaccinations in April, it said that if public health goals “can be achieved with less coercive or intrusive policy interventions (e.g. public education), a mandate would not be ethically justified”.

Professor Peter Singer argued last month that vaccinations should be compulsory, and not just in specific industries, but for everyone. Singer compared them to wearing seatbelts, remarking: “I can’t recall when I last heard someone demanding the freedom to drive without wearing a seatbelt.”

He said there was an even better case for vaccinations, namely that seatbelts prevent harm to the people wearing them while vaccinations prevent harm to others. But failure to wear a seatbelt is a minor infringement on freedom that lasts the duration of a car ride. Injecting a substance into your body may have short-term and/or lasting health impacts – however low the probability. It is qualitatively different.

Feminists have long argued for the absolute right to bodily integrity, which means the right to decide what happens to our own bodies, against a backdrop of serious violations including state-sanctioned marital rape, lack of access to contraception and abortion, and obstetric violence. The law of Gillick competence gives children the possibility of consenting to medical interventions even against their parents’ wishes, on the grounds that each person should, when they have the capacity, make decisions about their own bodies and lives.

Overriding this autonomy with coercive threats to livelihood would need to meet a very high bar for justification. Health experts remain uncertain about what percentage of the population needs to be vaccinated to provide herd immunity. Some think it is impossible. But Australia is on track for high vaccination numbers without coercion. On the WHO advice alone, mandatory vaccinations would seem premature.

Intensity of feeling on this issue may track political lines, with research on moral emotions suggesting conservatives tend to value purity in bodily matters, especially relating to food and sex, while liberals generally do not. But it’s not solely a left/right issue. Purity can show up on the left in the fixation on eating only organic, pesticide-free food, for example.

None of this is to say mandates can never be justified. Ultimately, this is an empirical, not moral, question. For health and aged care workers, perhaps the risks of spreading the virus are already well enough established. And there may come time when it is clear what proportion of our population will be vaccinated willingly (or after persuasion, nudging and financial incentives). And if that falls short of the proportion we need vaccinated to achieve herd immunity, or otherwise avoid serious harm, perhaps we will then decide that disincentives and compulsion are the only way to meet that public health goal. But we are not yet at that point.

Both of the women I spoke to had reasonable objections to vaccination, prominent among them that COVID-19 hadn’t been around long enough for longitudinal studies on the vaccines’ effects. Perhaps their concern is misguided, but coercing them into vaccinations they don’t want may be even more misguided.

Holly Lawford-Smith is an associate professor in political philosophy at the University of Melbourne.