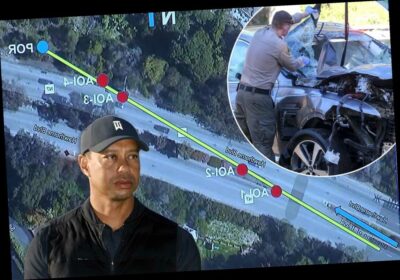 Tiger Woods wasn’t slapped with so much as a ticket despite recklessly driving 87 mph in a 45 mph zone for a variety of reasons — including that there were no witnesses, California authorities explained on Wednesday.

The PGA legend was barreling down Hawthorne Boulevard in Rancho Palos Verdes when he smashed into barriers and then a tree that sent his Genesis SUV airborne before landing.

“Reckless driving, you have to have multiple violations in conjunction with one another,” he told reporters at a press conference announcing the cause of the Feb. 23 crash. “That did not exist here … and the speeding, there’s no independent witnesses regarding the speeding.”

“The decision to not issue a citation would be the exact same thing for anyone in this room who went through the same situation — solo traffic collision, there’s no witnesses, an infraction only,” Villanueva said. “We’re not going to issue a citation in an infraction not committed in a peace officer’s presence or independent witness, period.

“So any inference that somehow it’s special is false.”

Villanueva was grilled about the vehicle’s event data recording picking up Woods’ speeds of between 82.02 mph and 86.99 mph with no evidence of braking — but said that still wasn’t enough evidence to file charges.

“The event data recorder, that tells us what physically happened but we need a human being to witness it,” he said.

Investigators looked at four points of impact and found that Woods was traveling between 84 and 87 mph when he first smashed into a barrier on the roadway, then clipped a tree at 75 mph that sent the car careening into a hillside.”

The impact of the vehicle when it hit the tree caused the vehicle to go airborne and do a somewhat pirouette, landing on its side,” said Powers.

Woods was wearing a seatbelt at the time and suffered severe leg injuries requiring emergency surgery.