Home » Why CAN Wales ease lockdown quicker if England can't?

Why CAN Wales ease lockdown quicker if England can't? 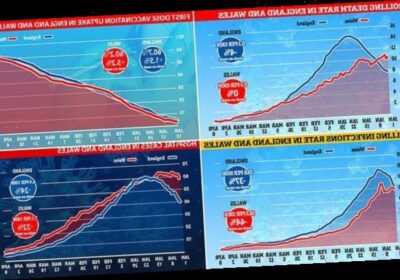 So why CAN Wales ease lockdown quicker than England? Official data shows England has better Covid vaccine uptake rates but still has a higher infection rate

Pressure is building on No10 to accelerate its roadmap out of lockdown in England after Wales announced Covid restrictions would be lifted ahead of schedule.

Two households will be able to meet indoors on May 3 rather than May 10 because of ‘improvements’ in the public health situation and the vaccination roll-out, Welsh First Minister Mark Drakeford said.

Gyms and leisure centres will also be opened up at the same accelerated pace and outdoor activities for up to 30 people will be able to tale place from April 26 instead of May 3.

But experts say the data – which Boris Johnson has promised to follow in his roadmap back to normality – doesn’t necessarily show Wales is in any better place than England.

England is currently beating Wales in the vaccination roll-out. Department of Health figures show 60.7 per cent of adults have now had a first dose in England, compared to 60.2 per cent in Wales. Though, the opposite is true for top-up jabs.

England’s coronavirus hospitalisation rate is much lower than Wales’ and has been since the end of January, with 4.4 infected patients currently occupying an NHS bed per every 100,000 people in the country. For comparison, the rate in Wales now stands at 7.2.

Death rates are similar between both nations, while Wales is currently recording fewer positive tests. England’s infection rate stood at 29.6 cases per 100,000 residents in the most recent seven-day spell, whereas the figure in Wales was 18.2 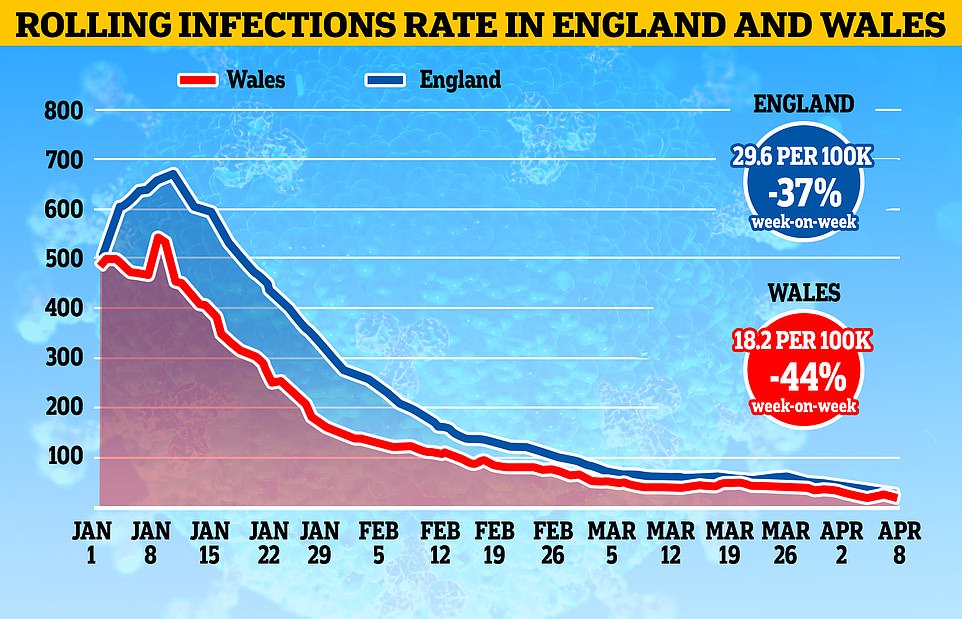 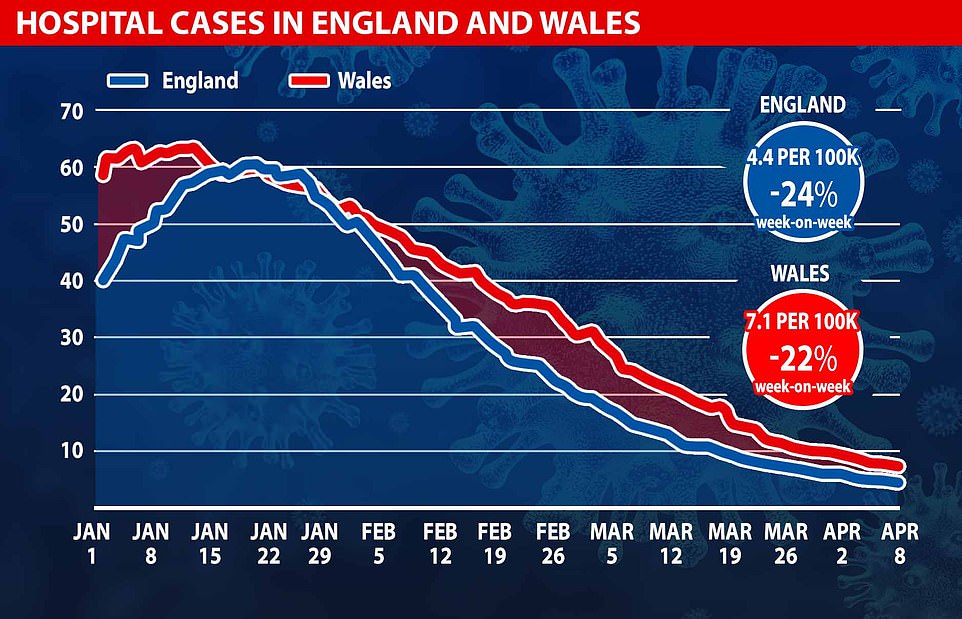 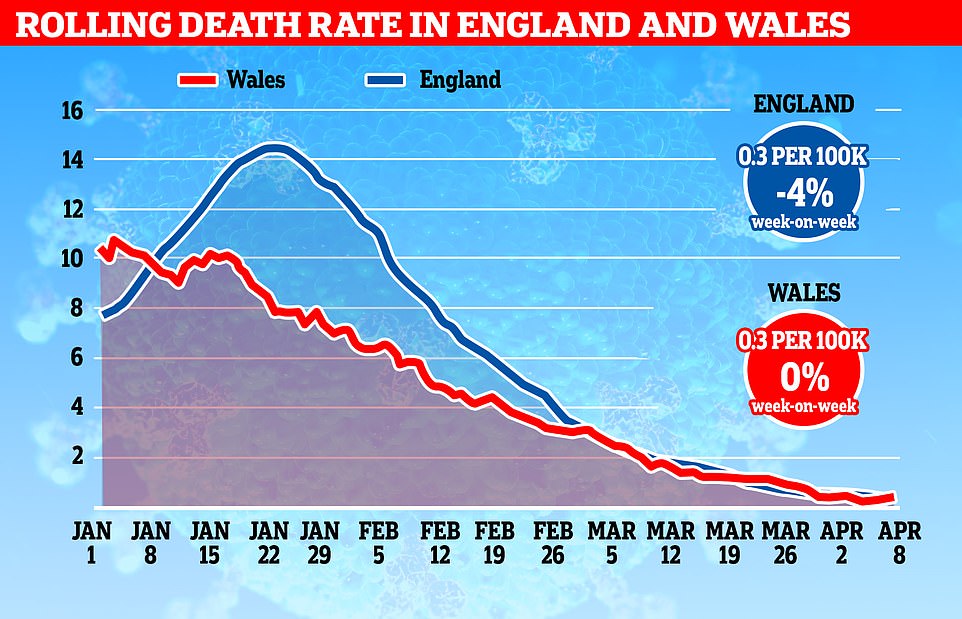 England’s death rate per 100,000 people is at the same level as Wales, with numbers falling at a faster pace 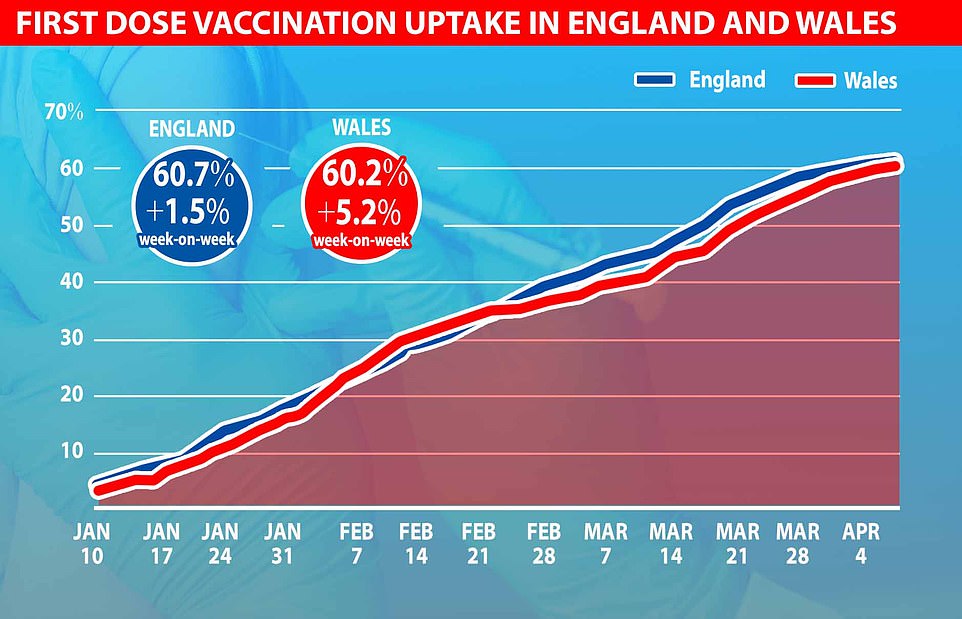 Figures from the Department of Health show that 60.7 per cent of adults have now had a first dose of the vaccine in England, compared to 60.2 per cent in Wales

GRANT SHAPPS SAYS PEOPLE CAN ‘START TO THINK’ ABOUT HOLIDAYS

Britons can ‘start to think’ about booking a summer holiday abroad, the transport secretary has said.

In a boost to the travel-starved nation, Grant Shapps said: ‘I’m not telling people that they shouldn’t book summer holidays now, it’s the first time that I’ve been able to say that for many months.’

He said people would want to book holidays to a ‘green country’ and they would only have to wait a few weeks before the list was unveiled.

‘For the first time, people can start to think about visiting loved ones abroad, or perhaps a summer holiday. But we’re doing it very, very cautiously, because we don’t want to see any return of coronavirus in this country.’

Pubs and restaurants will open for outdoor service from Monday, and hairdressers and shops will also be permitted to lift the shutters.

It comes after ministers set out more details of their traffic light scheme for allowing summer holidays which will see countries rated green, red or amber based on criteria including vaccination levels and case numbers.

Mr Shapps warned today it was ‘too early’ to categorise countries, but that a definitive list would be published in the coming weeks.

Dr Simon Clarke, an infectious disease expert at the University of Reading, told MailOnline: ‘It’s not entirely clear that Wales is in a better place overall, because while their infections are lower, their hospitalisations are higher.

‘But Wales will act as a good case study for the three other governments in the UK.

‘If lifting restrictions pay off then I expect some restrictions in England that are planned to be lifted on June 21 may be brought forward to May 17.

One economic think-tank today called on the English Government to be ‘more responsive to data’ and not care less about planned dates.

The Adam Smith Institute said the Welsh Government’s decision to open up earlier shows it is safe enough to do so across the UK.

A spokesperson said: ‘It should be a wake-up call to the Conservatives at Westminster that the Welsh Labour Party is more responsive to data and not stuck to dates.

‘Each week with restrictions is costing the country’s taxpayers upwards of £5billion.

‘The quicker we reopen without viral risk via the protection of antibodies and vaccines the quicker we can steal a march on our European neighbours that are still hunkering down under a third wave.’

They added: ‘If it’s safe to reopen, it is safe whatever side of Offa’s Dyke.

‘As we move back towards more normal life resuming we should demand a One Nation approach to reopen the UK together rather than difference for difference’s sake under devolution.’

And James Lawson, a fellow at the think tank, argued the Prime Minister should follow Wales’ example of opening up gyms earlier if he is serious about his obesity drive.

He said: ‘Gyms and leisure are essential to the health of the nation — mental, physical and economic. They should be opened as soon as possible.

‘The recent announcement of a £70m fund to tackle the obesity crisis is incoherent while the restrictions continue to hinder our ability to exercise.’

He said: ‘If you look at the latest data, England is still about fifty per cent ahead of Wales in terms of infections.

‘But Wales have, per capita, more hospital cases than England despite having fewer infections, which suggests their infections are in older people or in less well people.

‘We’re not entirely sure what the thresholds are for the different governments which would allow restrictions to be lifted earlier.

‘And I expect the governments are deliberately not telling us what those thresholds are so there isn’t public uproar calling for lockdowns to be gotten rid of.’

Professor David Alexander, an expert in risk and disaster reduction at University College London, warned opening up too soon in Wales or England could be dangerous, given the lack of data showing how significantly vaccines stop the spread of infection.

He told MailOnline: ‘There is definitely a correlation between restrictions on opening and movement and rates of infection.

‘Half of the UK population hasn’t yet been inoculated and another large proportion hasn’t had their second dose… We still do not know to what extent, if at all, vaccines inhibit the spread of infection.’

Professor Alexander also added that relaxing restrictions would be definitely welcome ‘but enormous dangers are associated with international movement’, which will be allowed to restart on May 17.

The Welsh Government yesterday said that coronavirus cases in Wales had dropped from 37 to fewer than 21 per 100,000 this week.

Wedding receptions for up to 30 people will also be permitted outdoors from April 26 – again a week earlier than previously announced.

The reopening of gyms, leisure centres and fitness facilities will now be allowed from May 3, brought forward a week from May 10. This will include for individual or one-to-one training, but not exercise classes.

An extended household rule will again allow two households to meet and have contact indoors from May 3, rather than May 10.

All dates are ‘subject to the public health situation remaining favourable’ and will be confirmed at a review of coronavirus regulations on April 22, the Welsh Government said.

Mr Drakeford said: ‘The public health situation in Wales continues to improve thanks to everything you are doing to help us control this awful virus.

‘Cases of the virus are falling and our incredible vaccination programme continues to go from strength to strength.

‘Last week, we set out our programme to further reopen the economy and relax the restrictions we have lived with for so long, as part of our careful, step-by-step approach to keeping everyone safe.

‘This week, because of the improvements we continue to see, we can bring forward some of our plans.

‘This is only possible because of the efforts everyone is making to protect themselves and their loved ones.’

Other relaxations of restrictions are still set to go ahead from Monday.

This includes the return of children to schools, all post-16 learners back at further education and training centres and university campuses reopening for blended face-to-face and online learning.

All remaining non-essential retail and close contact services will reopen.

Restrictions on travel in and out of Wales are also set to be lifted but people will not be able to travel to countries outside of the Common Travel area – the UK, the Channel Islands, the Isle of Man and Ireland – without a reasonable excuse.

Restrictions on political canvassing will be removed, so long as it is done safely, and wedding ‘show-arounds’ by appointment will be allowed.

From April 26 outdoor attractions, such as funfairs and theme parks, could be allowed to reopen — the date for which has not been changed.

Outdoor hospitality, including at cafes, pubs and restaurants, is also set to resume from the same unchanged date.