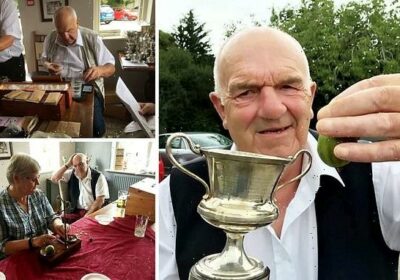 Who’s made a fool of Mr Gooseberry?: He left rivals green with envy. Now champion fruit grower Terry Price, 76, has had his hopes squashed amid claims of a poison (veg) plot. JANE FRYER went digging for clues

Forget Wimbledon, the Euros or even the Tokyo Olympics. The hardest-fought contest this summer has surely been among the gooseberry growers of Britain.

Records have been smashed and victories have been celebrated (with fish and chip suppers) even as allegations of sabotage have ripped through one of the oldest gooseberry societies.

In fact, over the past few days, gooseberries have rarely been out of the news.

And we’re not talking the teeny, hard, hairy green bullets you find in supermarkets, but vast, lush, competition-level berries in shades of pink, yellow and white — as well as the usual green. 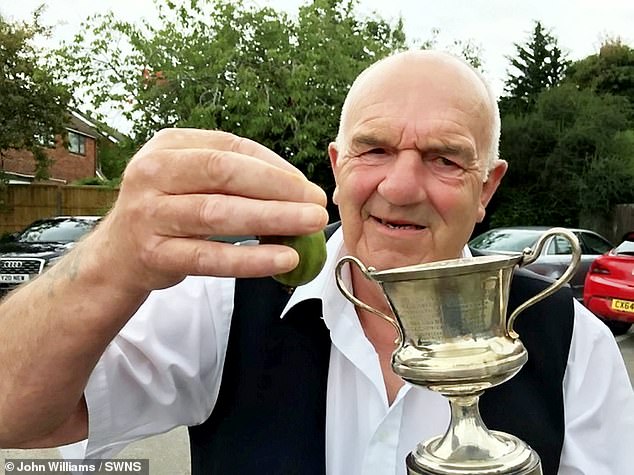 Terry Price (pictured), 76, reigning champion and president of the more than 130-year-old Goostrey Gooseberry Society in Cheshire found some of his prize trees have been poisoned

This lot are the size of eggs, weighing up to 50g (though they are usually measured in ‘pennyweights and grains’), bursting with juice and are the result of thousands of hours of pruning, feeding, watering, netting, penning and protecting from every type of weather — all in preparation for one competition.

Which means that, when things go wrong, people can get a bit worked up.

And that’s just what happened to poor old Terry Price, 76, reigning champion and president of the more than 130-year-old Goostrey Gooseberry Society in Cheshire.

Three months ago, he discovered some of his prize trees (never bushes) had apparently been poisoned.

Within ten days of him noticing them looking ‘sickly’, they were dead and his hopes of securing another win in the annual Goostrey competition were in tatters, along with his faith in mankind.

‘They have been tampered with, there’s no doubt about that,’ he said. ‘I’m sure whoever is responsible knows what they were doing.’

For while Terry, a former butcher and postman, has dozens of gooseberry trees, it was his best specimens — in his ‘championship pen’ — that were targeted. 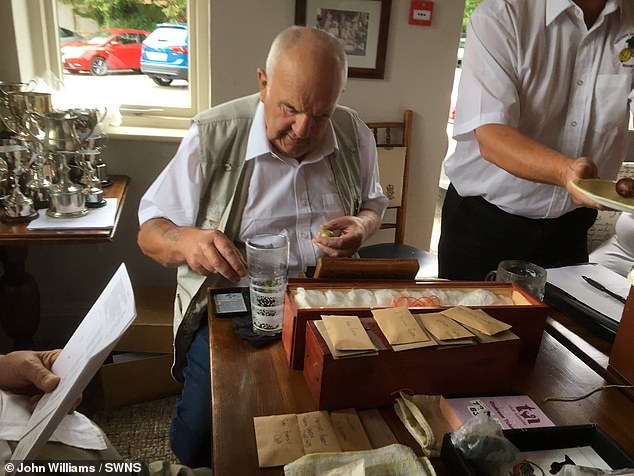 So he sent a few dead branches to a laboratory for testing and was told they’d been sprayed with a destructive chemical formulation not available over the counter.

And then he lashed out a bit, insisting darkly that he had a ‘good idea’ whodunnit and that he was sure the ‘truth would out’.

Yet with no clues, no muddy footprints, no trampled fences, no CCTV footage and no one acting suspiciously in the pub, even Miss Marple might struggle to get to the bottom of it all.

But it is little wonder Terry is so upset. For nearly half a century he has dedicated tens of thousands of hours to his beloved trees and has triumphed at Goostrey a record 11 times.

Last year, he romped home with a 50g monster, pocketing the cup, a special commemorative plate with a picture of a gooseberry on it (hand-thrown by a master potter) and a £20 gardening voucher.

So this year, after the sudden death of his champion trees, his best offering — at just 28g — was, frankly, embarrassing. 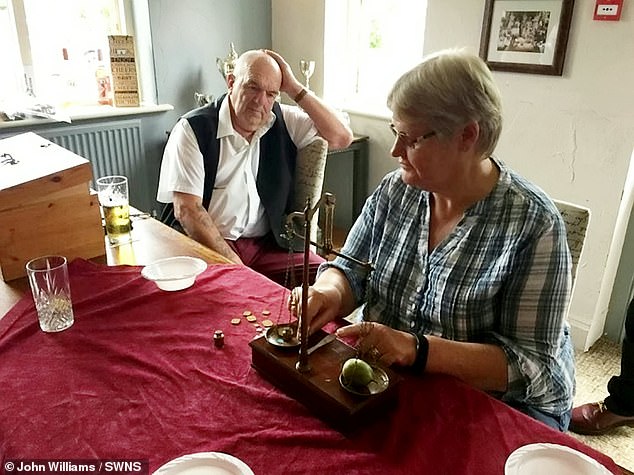 Pictured: Terry Price watching his champion gooseberry being weighed in 2020 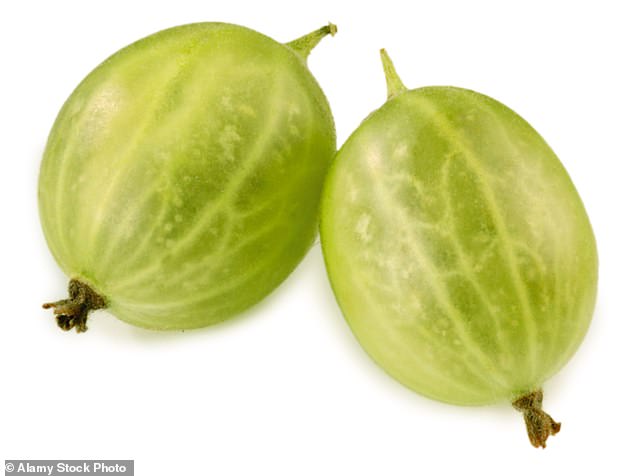 When it comes to competition gooseberries, we’re not talking the teeny, hard, hairy green bullets you find in supermarkets, but vast, lush, competition-level berries in shades of pink, yellow and white — as well as the usual green

As one fellow member puts it: ‘You always start the official weigh-off with the premium berry from last year’s winner and, well, Terry had a really teeny one!’

Instead, the winner of the much-coveted best-in-show, or ‘First Premier (heaviest) Berry’, went to Chris Jones, 69, an ex-lorry driver and Goostrey veteran who has been competing for over 35 years.

He won with an Edith Cavell premier berry of 28 pennyweights and 8 grains (44g) and already holds the world record for the heaviest green berry ever shown in the UK. (In 2002, he won with a berry weighing nearly 59g).

But this was Chris’s first Goostrey victory for 16 years and he was ‘extremely emotional’, because his brother had died overnight in South Africa. But ‘the show must go on’, he said — and he dedicated his win to his late sibling.

Although Bryan Nellist, 85, took a shock victory in the First Premier ‘berry-off’ with his Belmarsh white gooseberry, Chris won heaviest berry in the maiden class (for those who have never won a major prize in the show) and heaviest pair of twins (two gooseberries on the same stalk with no splits). 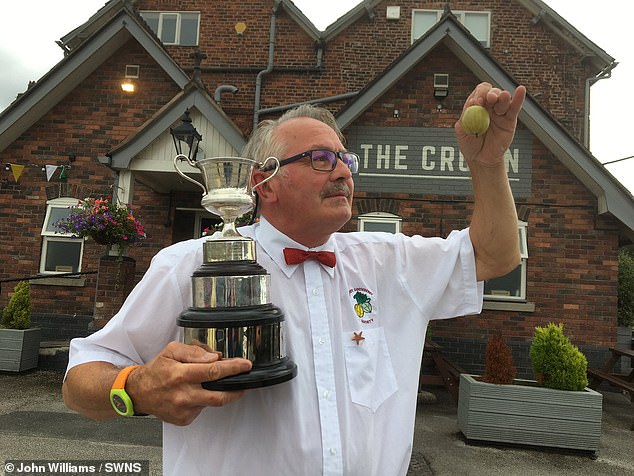 Exciting enough, but all the Egton locals wanted to talk about were the ‘sabotage’ dramatics unfolding in Cheshire.

‘I’ve never come across anything like that. People talk about competitive leek growing and the shenanigans that go on, but gooseberry growing isn’t like that,’ declared Ian Woodcock of the Egton Bridge society.

He’s right. Gooseberry growing might be — enthusiasts insist — addictive but the competitions have none of the darkness associated with the cut-throat world of Big Veg competitions.

Gooseberry lovers are different: they help one another, share cuttings, advice and ancient gooseberry lore. They celebrate one another’s victories, and positively embrace the wooden spoon for ‘smallest berry in show’.

You see, with gooseberries, it’s not about size (like Big Veg), but weight, and growers are just proud to be part of an old English tradition dating back to the mid-18th century, when gooseberry societies were first formed. They still uphold honoured traditions and rules — particularly for competitions.

So for the ‘gather’, or harvesting of competition entries, berries may only be picked in the presence of a witness who affirms they are not split, squashed or flawed and places them in a box which is then sealed with a wax seal, ready for the big weigh-off. 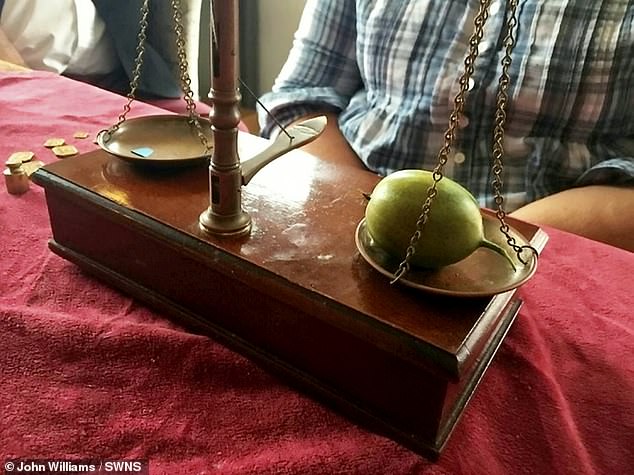 Pictured: Terry Price’s prize-winning gooseberry in 2020 is weighed on a pair of scales

The dedication is universal and you couldn’t possibly combine it with a full-time job. Or, I suspect, a vaguely demanding partner.

Because it goes on all year, starting in November with a hard prune before the trees are bedded down for the winter and cuttings planted. After that, it’s a daily dance to protect the trees from the frost, slugs, squirrels and bees, never, ever, allowing them to dry out. Come summer, you must be ever-ready, towel in hand, to dash out and protect them from the blazing sun.

A true aficionado will assess a gooseberry tree for champion potential in early summer, the year before a show, as a trainer might a racehorse.

Feeding your tree is, of course, also crucial for attaining that all-important weight, but it is the one subject where growers tend to mutter something vague about potash, wood ash or tomato food and never quite look you in the eye. In Goostrey (which is mentioned in the Domesday Book), rumours swirl of a dark potion brewed up in the Bongs, an ancient wood in the village, but no one will confirm it.

After all that, there are still myriad things that can go wrong. A long, hard spring could be a disaster. Underwatering can be catastrophic.

And when the warm weather comes and the grower strips off most of the fruit to leave just half a dozen or so to gobble up all the plant’s energy, even they might yet split or burst if too exposed and they overheat — or simply fall off the tree a day too early. 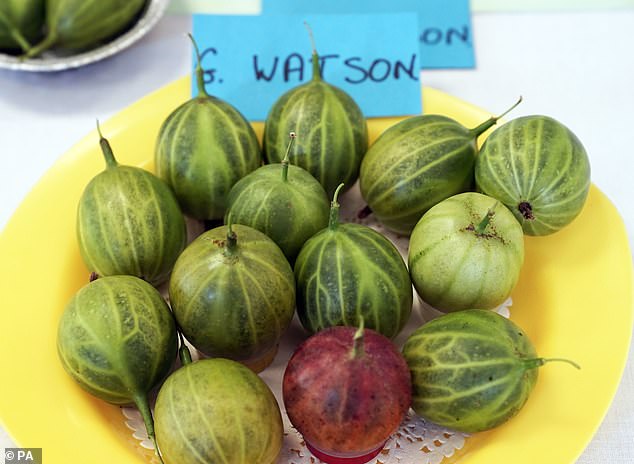 Pictured: Over a dozen competition gooseberries sit on a plate in 2019

‘It can be very stressful,’ one champion grower says. ‘Too wet, too dry, too cold, too hot! Always worrying about something.’

No wonder the societies tend to hold their meetings in the local pub. I bet they all need a stiff drink — perhaps even a gooseberry eau de vie which, apparently, is rather good.

But we’re getting off the point. So what of poor Terry and his massacred trees?

Theories abound around Goostrey. That he got his sprays muddled up and accidentally killed off his prize trees himself. That other growers got weary of him dominating the leader board with all those wins (plus a further 27 podium finishes).

Or, whisper it, that the lovely, warm gooseberry growing world has somehow been infiltrated by renegade members of Big Veg.

More likely it’s all just a storm in a teacup. But one thing is certain: Terry will be back for the big berry-off next year with bigger, better and heavier berries than ever.