Home » World News » What to do when you’re fed up, but street protests are out of bounds

What to do when you’re fed up, but street protests are out of bounds 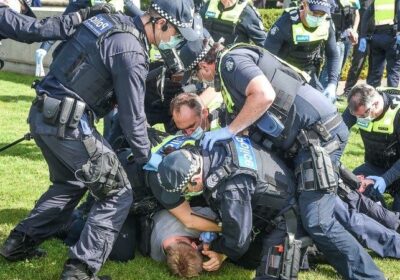 It is the third weekend in September 2011 and crowds are streaming into the MCG to watch Geelong play West Coast in the preliminary final. Julia Gillard is prime minister and Ted Baillieu is Victoria’s premier.

We have just had the tenth anniversary of the September 11 attack on the World Trade Centre, Prince William and Kate have been married for a few months and the biggest security challenge in Australia is the upcoming visit of president Barack Obama still buoyed by US forces finding and killing international terrorist Osama bin Laden. 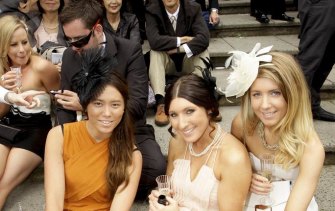 Punters enjoy the atmosphere in the crowd on Melbourne Cup Day. No social distancing.Credit:Paul Rovere

Soon we will turn our attention from the footy to the spring carnival where many of the 105,000-strong crowd will arrive in packed trains. Several will leave sober.

Melbourne is a ghost town with more boarded up shops than the OK Corral. There is a 9pm curfew and five-kilometre restriction to movement. Essential workers must carry papers to prove they are heading to or from work and not sneaking out for a warm pie at a 7-Eleven.

Masks must be worn outside, and you must sign in to go inside a shop.

The MCG lies empty. The only sign of finals is Melbourne scarves draped on the statues of Norm Smith and Ron Barassi. We are preparing for the grand final public holiday where you can’t do anything to celebrate a game being played 3500 kilometres away.

A protest is planned for Saturday. The Premier talks tough. The Chief Commissioner of police talks tough.

Public transport will be closed to thwart a potential violent demonstration in the dead heart of the city. More than 2000 police will be lying in wait, prepared if necessary to fire capsicum rounds and non-lethal projectiles into the crowd to keep order. (My suggestion of firing vaccine darts into the crowd from helicopters has been rejected.)

The trouble with the lunatic anti-vaxxers and COVID deniers who turn up to take on the cops is they take the headlines and conceal the truth. Most of the protesters want to attend not because they have been fed lies, but because they are fed up. 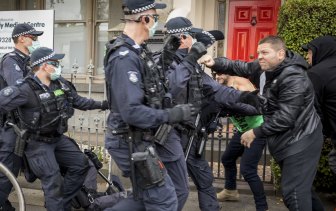 People who have lost their jobs, lost their way, are battling with home schooling or can’t see their elderly parents, want to be heard.

It was about 50 years ago that we started to understand that protests are legitimate when more than 100,000 people would march in the streets in anti-conscription, anti-Vietnam war demonstrations.

At first, police put their most experienced cops on the front line, many who had fought in previous wars. They thought the protesters were traitors, and the confrontations were violent and frequent. The then assistant commissioner Mick Miller didn’t call for more weapons or stricter rules. He put his most junior cops at the front. Men and women around the same age as the protesters and the violence dropped. 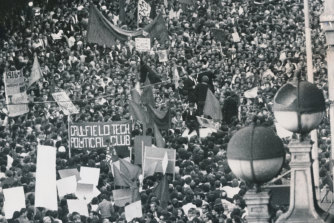 The trouble this time is the legitimate right to protest is trumped by the health concerns.

Large gatherings have the potential to spread the virus. To beat the public transport ban, demonstrators will arrive in groups that can be virus spreaders. The people who want their rights back may unwittingly extend the period that we are being forced to live as cave-dwelling hermits.

The Premier must change his message that if we continue to be naughty we will be kept in after school.

Police are caught in a terrible bind. They want to work for the community, not oppress them with health restrictions that read like an Orwell novel. Make no mistake – the average cop hates making people move on from a coffee shop, staff hotel quarantine or check registrations in regional Victoria to make sure some sneaky resident from Bentleigh doesn’t turn up in Benalla. And they don’t want to be spat at and punched at demonstrations.

It may take years for police to win back the confidence of many.

The message has to be to the vaccine hesitant – perfectly reasonable people who have doubts – and forget about the anti-vaxxers who believe COVID is a hoax, Barack Obama was born in Nigeria, Trump won the last election, Elvis is snorkeling for coconut crabs off the Cook Islands, Harold Holt owns a dumpling restaurant in Beijing and Neil Armstrong took one small step for mankind in a sandpit at Paramount Studios.

Stop talking down to people who haven’t embraced the restrictions and weren’t first in line for the needle. Being double vaccinated makes you sensible not superior.

We cannot let COVID split us into us and them. We have suffered together and need to recover together. Peaceful people who want to be heard need to be given an alternative than to take to the streets.

What about an online petition? Post pictures with the sign “Open Up”. Stand outside your closed business, closed school, favourite restaurant or your own home. There are so many ways to be heard without yelling cliches into a bullhorn in the city.

We have lost so many civil rights but not the one to have a different opinion.

There was a leader who, while he was always up for a fight, knew that confrontation was the last resort. He said, “To jaw-jaw is always better than war-war.” His name was Winston Churchill.