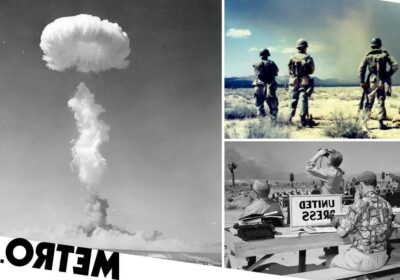 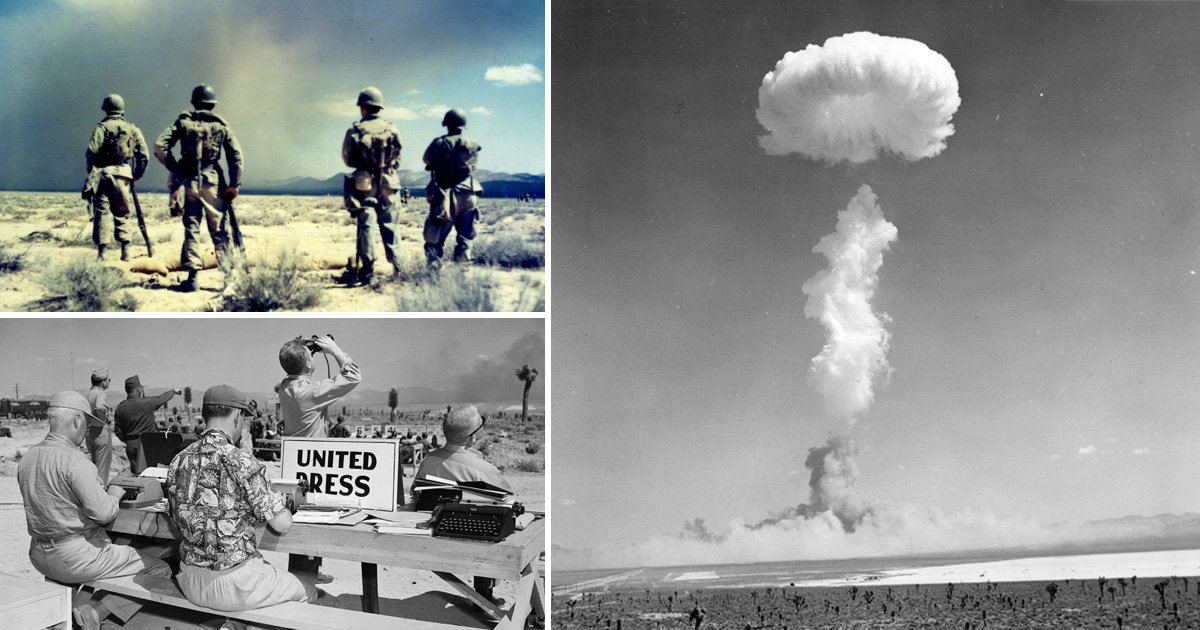 On April 22, 1952, millions of people across America switched on their TVs to watch the first live broadcast of a nuclear bomb test.

The detonation took place at the Yucca Flat test site in the Nevada, about 65-miles from Las Vegas.

At the time, the Las Vegas Sun reported: ‘Hell burst from the skies over Yucca Flat this morning as America’s latest model atom bomb exploded with enough force to devastate much of New York, Chicago, Los Angeles or any other big city.’

Now, 70-years from the day, archive footage of the broadcast shows exactly what millions of Americans saw on their TV screens.

The black and white film shows an aerial view of the drop site laid out with a target.

The device, nicknamed ‘Big Shot’ but officially called Charlie, was dropped from a Boeing B-50 Superfortress and was supposed to take 36 seconds to fall 33,000ft to the earth and then explode.

However, the television commentator doing the countdown only reached 20 before the bomb detonated.

‘The atomic flash was spotted 430 miles away in southern Idaho,’ the Las Vegas Sun reported.

‘Out of the flash came a boiling fireball which appeared more brilliant and furious than the air-dropped A-bomb produced at Bikini in 1946.

‘The boiling maelstrom soared skyward slowly, burning with a heat that was imagined before it was felt.’

After capturing the initial blast the TV broadcast cut to show spectators lined up on deck chairs wearing protective glasses being hit by the flash of light.

The US military had troops stationed just four miles from the test site who moved to within 150 years of ‘ground zero’ less than one hour after the bomb went off.

A further 120 paratroopers were then parachuted through the fallout zone one hour and 40 minutes later.

Brigadier General Frank Dorn was quoted as saying: ‘Not a single hair was singed, a single neck twisted or a single head injured.

‘The only “casualties” were the fellows who got a mouth full of dirt when the bomb went off.’

At the time, the effects of radiation poisoning and just how deadly atomic weapons and their fallout could be had not been fully understood.

General Joseph M. Swing told the Las Vegas Sun in 1952, he thought his unit ‘could have been closer to the burst – without danger – than we were this morning’.

The general also guessed that troops could have ‘entered the target area in less than half the 58 minutes ordered by radiological safety units’.

During the 1950s, the spectacle of nuclear testing attracted hundreds of people to Las Vegas from all over the US.

More than 825 detonations were carried out at Yucca Flat test site most of them underground, testing ended in 1991.