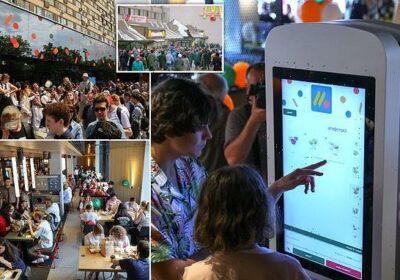 Welcome to McDonaldski! Russian fast food rip-off where a Big Mac is called a ‘grandee’ opens to an enthusiastic crowd and long lines after American corporation pulled out

Russians attended the grand reopening of the country’s first ever McDonald’s, which is now named ‘Tasty and that’s it’.

One man was booted out of the launch press conference for holding up a sign which read: ‘Bring back the Big Mac’.

The iconic burger and McNuggets are no longer on the menu, but the new company’s quality manager insisted the products are virtually unchanged.

It’s not clear whether all the ‘new’ restaurant’s recipes are the same as before. 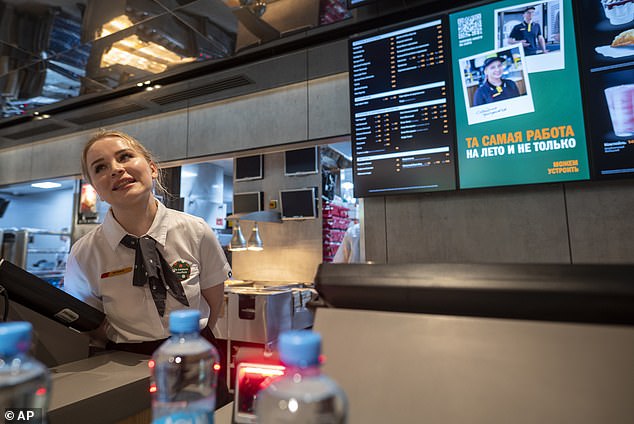 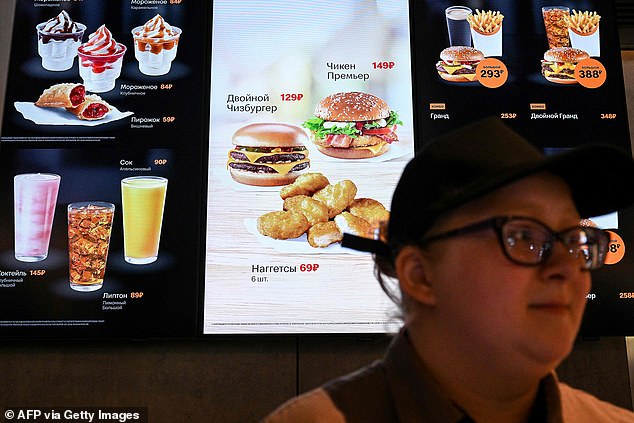 Knock-off items include the ‘Chicken Premier’ and the ‘Grandee’ burger, replacing the Big Mac 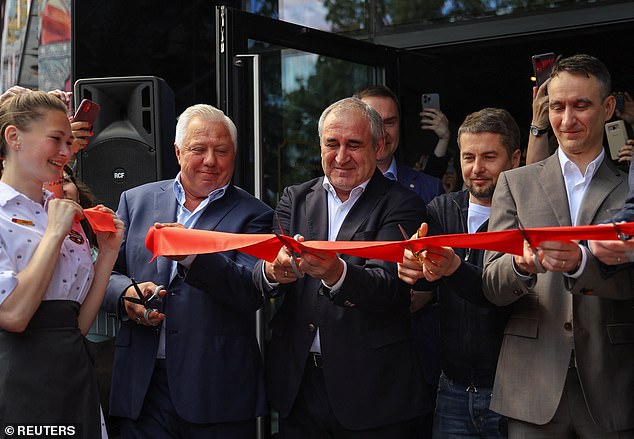 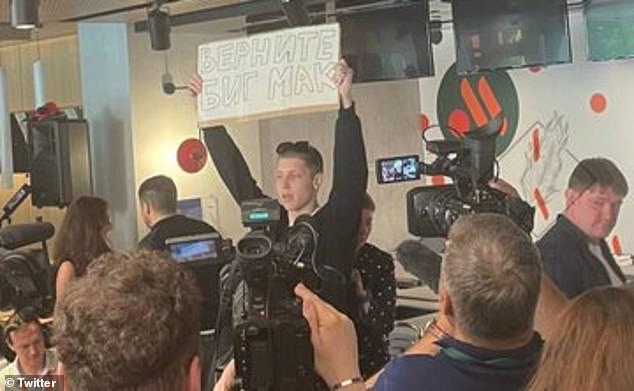 Not all are impressed with the new offering: a man held a sign reading ‘Bring back the Big Mac’

Diner Sergei, 15, said: ‘The cola is different, but there really is no change to the burger.

‘The taste has stayed the same.’ The slogan at Vkusno & tochka (‘Tasty and that’s it’) states: ‘The name changes, love stays.’ 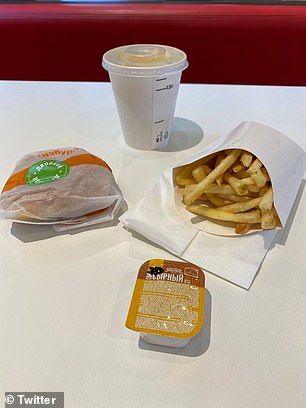 Its logo is an ‘M’ made up two fries and a small round burger.

That’s despite there being no ‘M’ in the new name.

The queue at Pushkinskaya square this morning was significantly smaller than the thousands of people who thronged to the original McDonald’s opening there in 1990 during the Soviet era.

It did not offer the Big Mac and some other burgers. A double cheeseburger was going for 129 roubles ($2.31) compared with roughly 160 under McDonald’s and a fish burger is 169 roubles, compared with about 190 previously.

McDonald’s sold all its assets in Russia last month, shuttering 850 restaurants and firing 62,000 workers after 32 years in the country.

The American fast food giant, which serves 70million customers a day in 100 nations, said operating in Russia was ‘no longer tenable’. 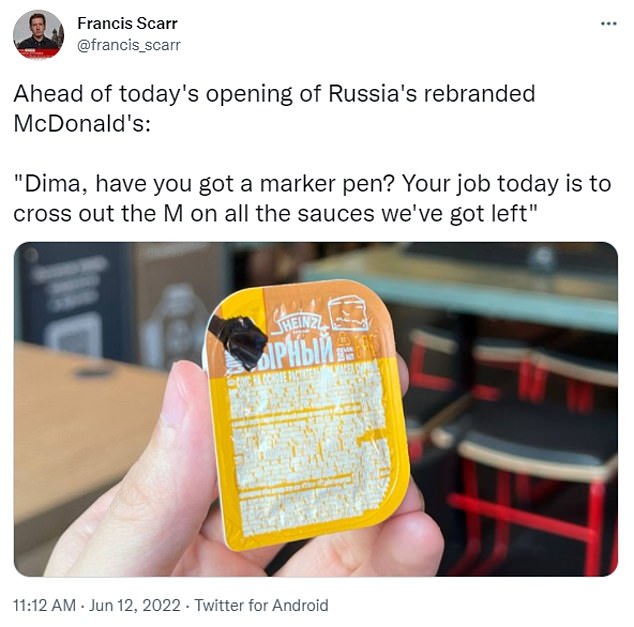 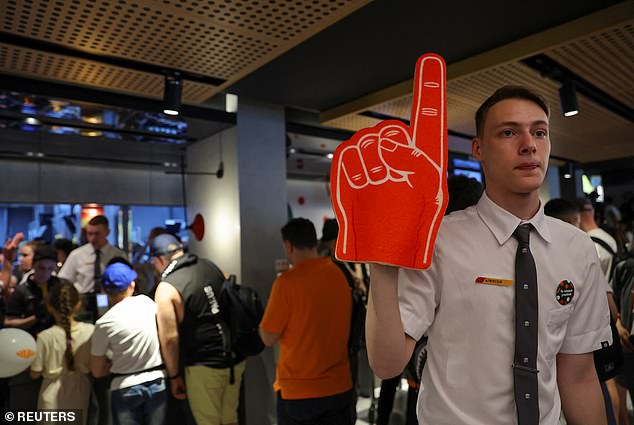 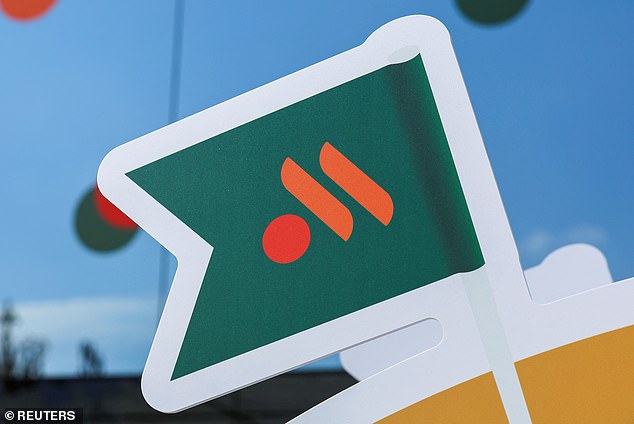 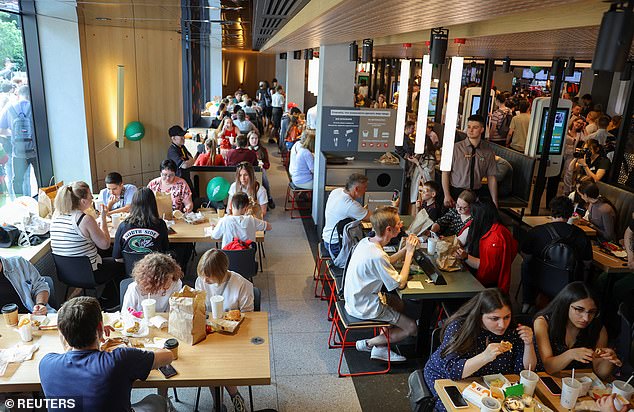 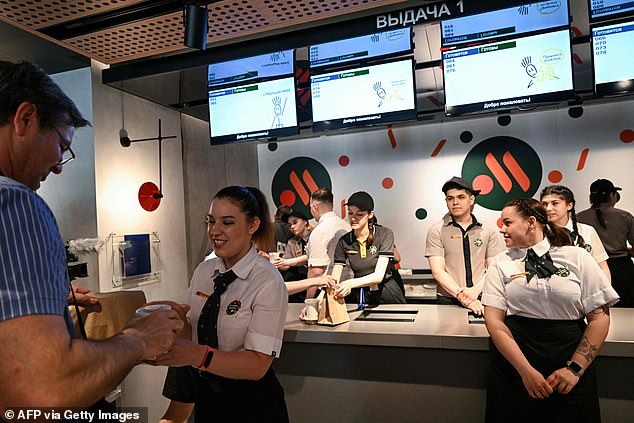 McDonald’s stated: ‘The humanitarian crisis caused by the war in Ukraine, and the precipitating unpredictable operating environment, have led McDonald’s to conclude that continued ownership of the business in Russia is no longer tenable.’

Chief executive Chris Kempczinski said the ‘dedication and loyalty to McDonald’s’ of employees and hundreds of Russian suppliers made leaving a difficult decision.

It is the world’s second-largest private employer. 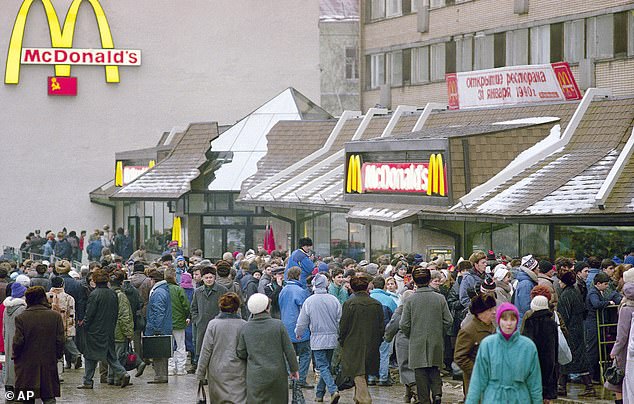 Then: Thousands waited outside the first ever McDonald’s opened in Russia on Jan 31, 1990 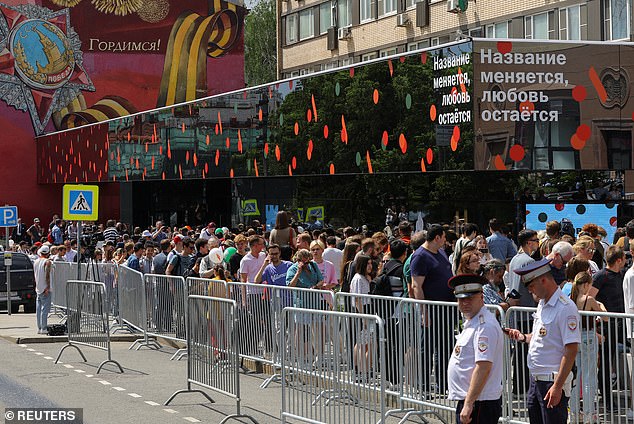 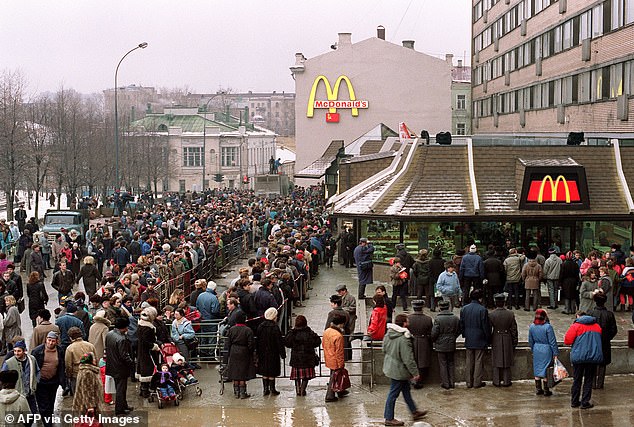 Thousands of Russians thronged to the Pushkinskaya Square restaurant on Jan 31, 1990 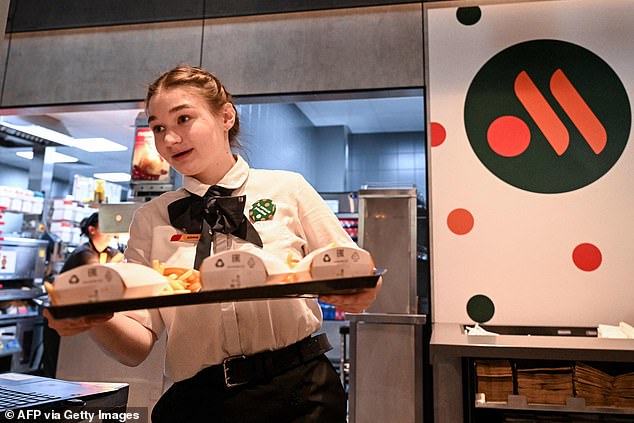 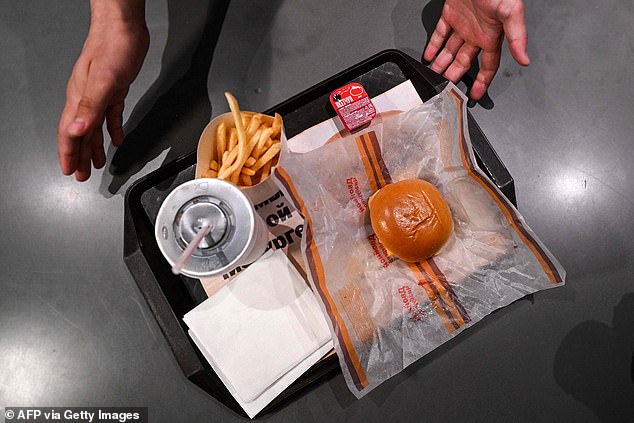 Ketchup, mustard and mayonnaise pots have been marked to remove the McDonald’s ‘M’ 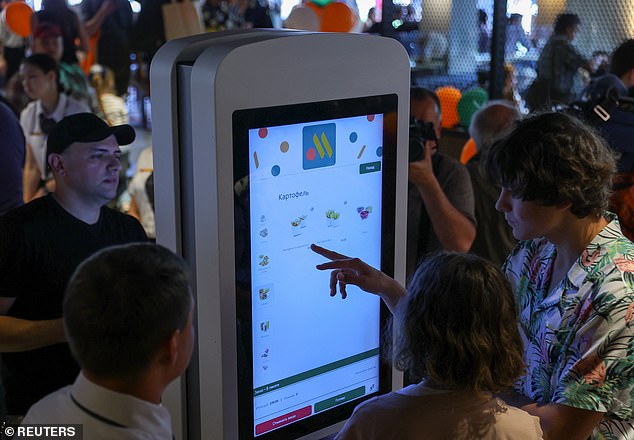 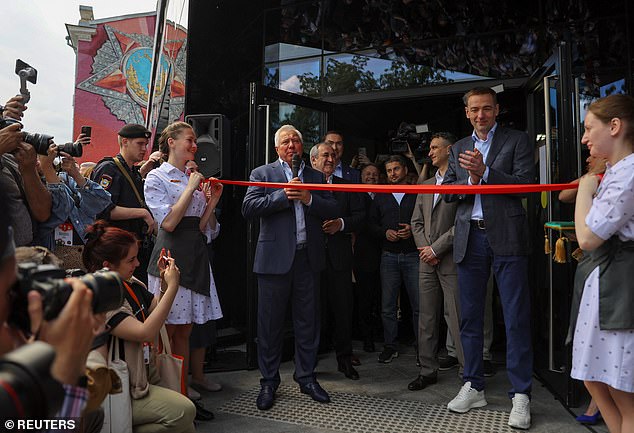 The first McDonald’s in Russia opened in the centre of Moscow shortly after the fall of the Berlin Wall.

It was a powerful symbol of the easing of Cold War tensions.

McDonald’s was the first American fast food restaurant to open in the Soviet Union, which finally collapsed in 1991.

Coca-Cola, Pepsi and Starbucks have also paused or closed operations in Russia in the face of western sanctions.

Vkusno & tochka CEO Oleg Paroev said the company was planning to reopen 200 restaurants in Russia by the end of June and all 850 by the end of the summer. 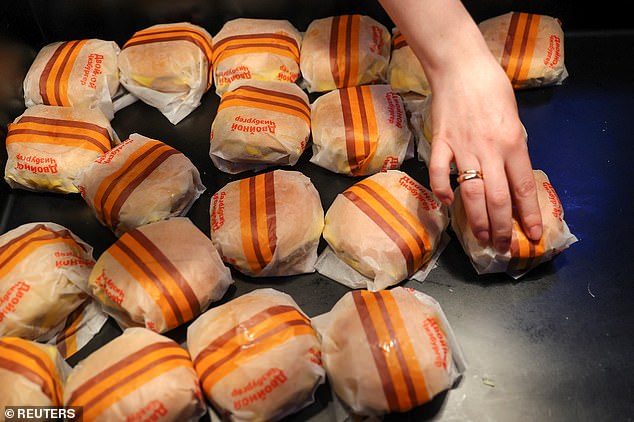 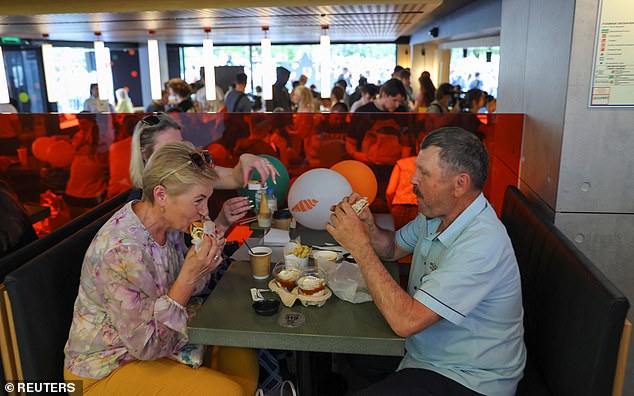 An older Russian couple pictured tucking into burgers and fries, with sundaes at the ready 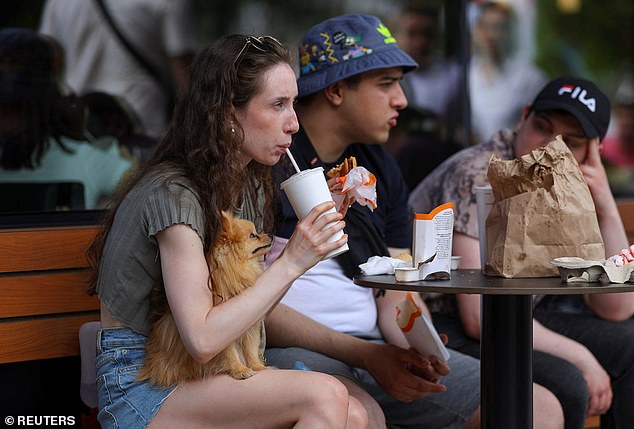 Dog eat dog: a customer sips from a soft drink with a burger in hand as her pet looks on

‘For three months we did not work,’ said Ruzanna, manager of a Moscow branch that will open in July. ‘Everyone is very pleased.’

Alexander Govor, the new owner of the chain, said up to 7 billion roubles (£100million) would be invested this year.

The business already employs 51,000 people, according to Mr Govor.

‘The corporation asked me to, first of all, keep the headcount, to provide people with work. That’s what I’m going to do,’ he added.

The end of an era: How the closure March of McDonald’s 850 restaurants in Russia 32 years after it first launched in Moscow marks the end of the west’s engagement with post-Soviet Russia

When it first opened its doors in January 1990, 30,000 Russians who had lived under the iron fist of Soviet rule queued to get their first taste of McDonald’s Big Mac.

The fast-food giant’s first Russian outlet opened in Moscow’s Pushkin Square, and caused such excitement that some people joined the huge queue for the restaurant without knowing what it was for.

By the end of the day the store had set a new opening-day record for the company and more than 27,000 people applied for waiter jobs. Only 600 were hired.

The famous Golden Arches, which were iconic in almost every corner of the globe, had finally reached beyond the Iron Curtain and soon became a symbol of Soviet acceptance of American capitalism.

With the fall of the Berlin Wall months before and the vast Soviet Union beginning to crumble away, the McDonald’s store had became an unlikely cultural touchstone that would represent a thawing relations with the end of the Cold War.

McDonald’s announced in March that it was closing all of its outlets in Russia – including its famous original outlet following Vladimir Putin’s invasion of Ukraine.

Their move followed similar withdrawals made by Coca-Cola, Pepsi and Starbucks, plunging Russia further into international isolation – after three decades of engagement with the West.

The BBC’s Steve Rosenberg, who was in the queue at the Moscow McDonald’s when it opened said its closure was ‘hugely symbolic’. 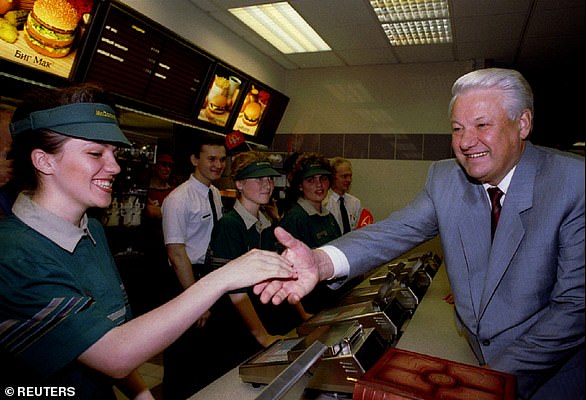 Russian President Boris Yeltsin (right) shakes hands with a staff member at a McDonald’s restaurant in Moscow, Russia, in 1990 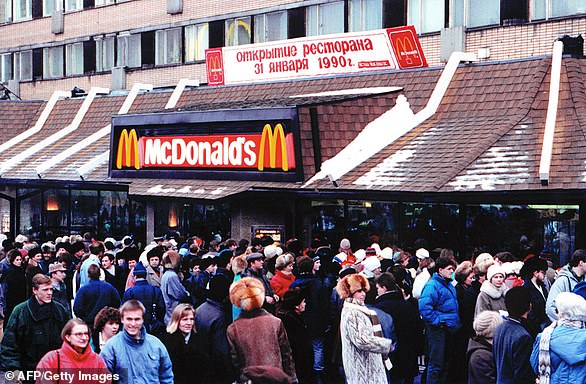 McDonald’s announced in March that it is temporarily closing all of its outlets in Russia – including its famous original outlet following Vladimir Putin’s invasion of Ukraine. Pictured: Queues on opening day of the Pushkin Square McDonald’s

The famous Golden Arches, which were iconic in almost every corner of the globe, had finally reached beyond the Iron Curtain and soon became a symbol of the power of American capitalism as the Soviet Union collapsed. Pictured: An elderly Soviet woman eats a hamburger at the Pushkin Square restaurant on opening day

Journalist Yuliya Chernova, who was a young child when Russia’s first McDonald’s outlet opened, recalled in March the ‘deliciousness’ of a milkshake when she tried it for the first time.

The Pushkin Square McDonald’s opened on January 31, 1990, around 18 months before the Soviet Union collapsed. It was American giant’s 11,201st store. 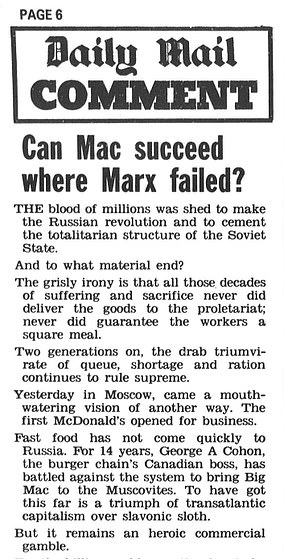 Pictured: A Daily Mail Comment piece from the time about the battle to bring ‘Big Mac to the Muscovites’

It had taken 13 years of negotiations before the Soviet authorities allowed the venue to open. The discussions began in 1976 and were led by George A. Cohon, the president of McDonald’s Canada.

It then cost $50million to get the operation up and running.

The restaurant chain’s most famous burger – the Big Mac – was known in Russia as the Bolshoi Mak, with bolshoi meaning ‘big’ in Russian.

The Daily Mail’s original reporting of the Pushin Square venue’s opening described how some Russians arrived before dawn in the hope of getting their hands on burgers and fries.

Such was its popularity, the queue to get in the venue ended up being more than 90 minutes long.

McDonald’s Mr Cohen said of the outlet’s opening, ‘It’s been a long, long road. It’s also been worth every drop of sweat.

‘Today is the most exciting day of my life, and I salute all those who have come along this path with me.’

One 18-year-old customer told the Daily Mail at the time: ‘I’ve seen places like this in American films but I wondered if I would ever be in one.

‘For months I’ve watched this building being prepared.’

Another added: ‘I’ll be here every week. It is already my favourite food.

Other amazed customers told the New York Times that the ‘Bolshoi Mak’ was ‘something like you’ve never tasted before.’

‘You take a bun, a very tasty bun, and you cut it in half. Then you add some grilled meat, top quality meat, mind you, not like the meat we get here,’ they said.

‘Then some cheese, then very many vitamins and then you add some spinach. And that, comrades, is the Bolshoi Mak.’

It was not only the customers who were scrambling to get through the restaurant’s doors.

Of the 600 jobs that were advertised, around 27,000 applications were received.