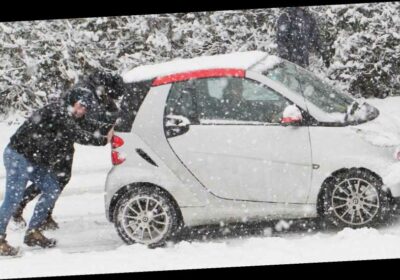 TORRENTIAL rain and a 20cm snow bomb are set to hit Britain over the weekend with 37 flood warnings in place.

Yellow snow warnings are also in place for Scotland today, and have been issued in Wales and parts of England for Saturday – with the potential for 10-15cm in the West Midlands.

An angry band of heavy rain continues to stalk the UK, leaving up 40-50 mm of rainfall across parts of Dartmoor and along the south coast of Cornwall.

The MetOffice warns Brits to prepare for flooding – telling them to expect travel delays and damage to some properties.