‘We hear crickets’: Calls for watchdogs to stamp out land banking

More regulation of property developers is needed to prevent them deliberately releasing land slowly to drive up prices for aspiring home owners and maximise their own profits, according to independent think tank Prosper Australia. 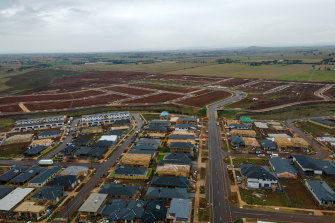 An aerial view of the Woodlea development in Aintree which was highlighted in Prosper’s report. Credit:Eddie Jim

While the advocacy group for developers denies land banking happens, Premier Daniel Andrews on Tuesday told a press conference he expected private developers would release lots to the market as soon as they had approval and the capability to do so.

“This issue of land banking doesn’t do anybody any good, other than a very small number of people who might perhaps get super profits out of it,” he said. “We are working with those developers to impress upon them, so they understand what our expectations are.”

When asked whether the government would consider strengthening rules to prevent land banking, the premier said “nothing is off the table when it comes to these things”.

An ACCC spokesman said the Competition and Consumer Act prohibited certain types of agreements between competitors, and other types of conduct where the conduct had the purpose, effect or likely effect of substantially lessening competition.

“The ACCC does not comment on whether particular conduct in a specific situation may be against competition law,” he said.

A spokesman for APRA said land banking was outside the regulator’s remit.

“We don’t have any involvement with property developers at all, and nor do we have any mandate to regulate or influence housing affordability,” he said.

Prosper’s analysis of the past 10 years of land sales on the outskirts of Australia’s big cities found developers were drip-feeding supply to maximise profits.

The think tank found the true cost to home buyers of land banking over that period was $5.9 billion nationwide.

Prosper’s director of advocacy, Karl Fitzgerald, said the ACCC had done “absolutely nothing” to regulate the sector and APRA only had oversight if financial securities were raised.

Fitzgerald said developers used algorithms to tell them when there was uncertainty in the market, and instead of lowering prices they instead lowered supply.

“These tacit arrangements that control the supply of new housing, even at higher prices, would attract regulatory scrutiny in any other sector,” he said. “Despite the intense focus on housing supply, we hear crickets.”

“If the extraordinary markups we see in property, and the understanding the market seems to have about controlling the rate of supply, occurred in any other market it would attract a huge amount of regulatory scrutiny,” he said. “If you saw the markups and the price growth that you see in property, in motor vehicle, in petrol, in fruit and vegetables, in construction materials that would attract regulatory scrutiny, but for some reason it doesn’t in property.”

Matthew Kandelaars, chief executive of property industry lobby group the Urban Development Institute of Australia declined to comment on whether there was enough regulation of developers.

He said the question was based on a false premise that developers were deliberately land banking for commercial gain.

“The reality is that if developers are not settling lots they’re not making money, while they’re paying ever-increasing holding costs on the land,” he said. “Investors with impatient capital won’t let this slide, so any notion that they are deliberately land banking is blown out of the water.”

The Money with Jess newsletter helps you budget, earn, invest and enjoy your money. Sign up to get it every Sunday.