Volunteers have 'meet and greets' with migrants sent by traffickers 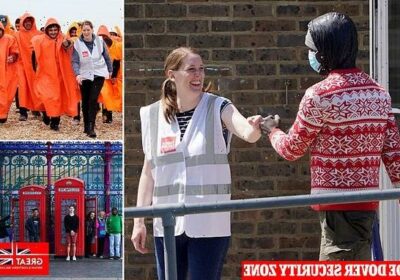 Is the charity fighting attempts to send migrants to Rwanda also encouraging them to come to the UK in the first place? And why, when it is battling ministers, was it allowed to operate INSIDE Dover’s secure border zone? SUE REID investigates Care4Calais

An award-winning photo of smiling asylum seekers standing by London’s red phone boxes is on show at Heathrow airport.

It has been viewed by millions of incoming travellers already this year as part of a new government campaign to portray Britain as a great nation welcoming everyone who comes here.

All this sounds utterly laudable. Except for one or two worrying details.

The image plastered over the airport’s walls acts as a showcase for the charity Care4Calais (C4C) – whose volunteers are also in the picture. 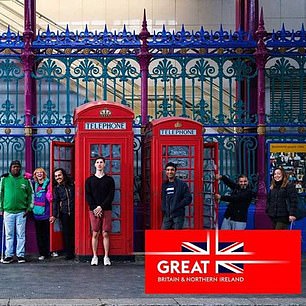 Yet, C4C happens to be a vociferous opponent of the very same government’s immigration policies, playing a key role in delaying last month’s Home Office deportation of Channel boat arrivals to Rwanda.

What is more, this spring and summer, the charity’s volunteers have been ‘meeting and greeting’ migrants sent by traffickers to Britain from France as they reach Dover’s main port and a Kent beach in the shadow of Dungeness nuclear power plant.

The Mail can reveal the charity is also helping migrants with asylum claims, and says proudly that it ‘signposts’ them towards suitable lawyers who will fight their cases against deportation.

To help with this, its volunteers work via the internet and in person at 147 Home Office- requisitioned hotels around the UK where thousands of asylum seekers, many who slipped in illegally on traffickers’ boats, live at a cost of £5million a day to the taxpayer. All the more puzzling is that the Cabinet Office – which advises prime ministers on strategy – issued a press release this spring praising the charity’s asylum-seeker photo, taken at London’s Smithfield meat market.

It said the picture, along with 39 others, would go up at Heathrow as part of the Government’s Great Exposure competition, run with the Royal Photographic Society, to promote UK trade and tourism and attract more foreign students.

The Mail decided to investigate C4C when, in May, we spotted one of its female volunteers working inside the strict security zone manned by Border Force and immigration enforcement officials at Dover port where boat migrants are initially checked to weed out incoming jihadis, criminals or those carrying weapons.

We have photographs of the beaming volunteer, wearing the charity’s distinctive red and white gilet, inside the cordon on three days between May 5 and 17, plus records of other sightings of her there.

In one photo she is ‘fist bumping’ a young male migrant who has just arrived. In other shots, she is leaning down to put her arms around a small girl who hours earlier had set off across the Channel from France on a traffickers’ boat. 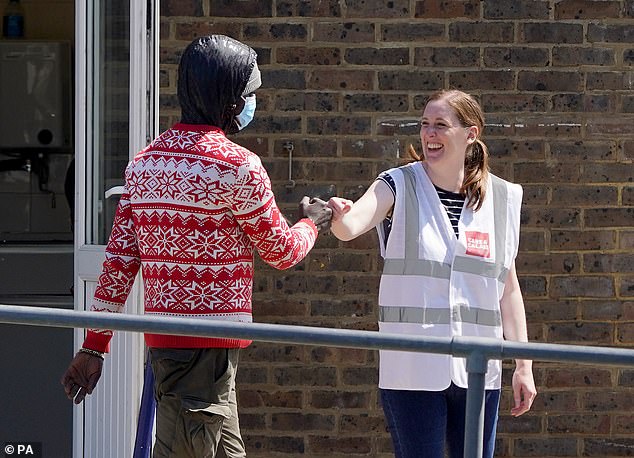 A member of Care4Calais fist bumps a migrant as they arrive in Dover, while inside the strict security zone manned by Border Force

The first is that C4C is a vocal critic of the Home Office efforts to stop traffickers’ boats which have brought more than 15,000 migrants across the Channel this year, provoking the UK’s biggest-ever illegal migration crisis.

Last weekend, the charity’s supporters staged rallies at Colnbrook immigration removal centre – ironically outside Heathrow where its photo is in pride of place – and Brook House, a similar deportation establishment near Gatwick airport. Waving banners saying ‘Borders Kill’, the anti-borders’ campaigners at Colnbrook listened to a speech by John McDonnell, the far-Left Labour MP and a member of Jeremy Corbyn’s former shadow cabinet, who said asylum seekers were welcome in the UK.

C4C founder Clare Moseley praised his stance, telling the Guardian newspaper website: ‘We know that many people oppose the shockingly brutal Rwanda plan. It is not what the British public want.’

Taking that view, whether correct or not, is one thing. But we have found that the charity is wittingly, or unwittingly, helping to perpetuate the Channel crossings organised by people-traffickers.

It reveals on its own website that it gives migrants mobile phones before they leave French beaches which means that, mid-Channel, they can call the British coastguard claiming their boat is in trouble.

Under international ‘safety at sea’ rules, the coastguard is then compelled to send out Border Force or RNLI vessels from Kent’s coast to retrieve them. The charity explains: ‘Migrants use mobile phones to check the weather, which is really important if they’re crossing by boat. They also need the phones’ GPS to makes sure they’re going in the right direction.

‘They may need to call the coastguard to be rescued. We try to provide as many (mobiles) as we can.’ 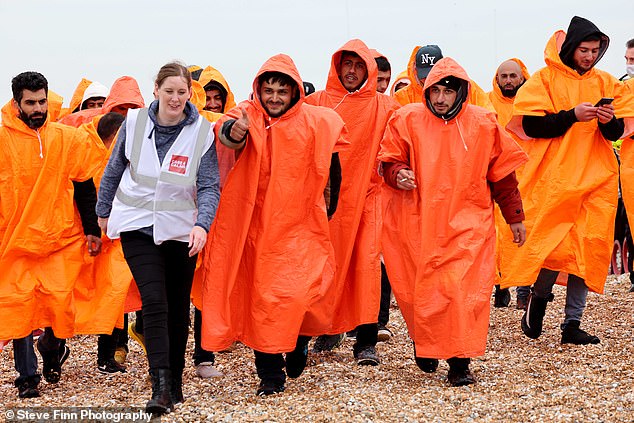 C4C was set up in 2015 by Miss Moseley, a wealthy former accountant. She had seen TV and newspaper stories about migrants waiting in Calais to cross to Britain by sea. She wanted to help them so left her home, and her family, to do so.

She started small by going to northern France and establishing a warehouse distributing food and clothes to migrants. Two years later, C4C was hit by scandal when it emerged she had a year-long affair with an individual called Mohamed Bajjar, then 27 and some 20 years her junior.

He claimed to be a Syrian refugee, but was in reality a Tunisian market stall trader married to another British woman.

The charity recovered from this debacle, then spread its wings. Soon it was operating along the coastline from Calais to Dunkirk, before reaching into Belgium, and the UK. It has thousands of willing volunteers, mostly British, but last year was placed under investigation by the Charity Commission. The outcome of the inquiry into its governance is yet to be decided.

However, C4C achieved most notoriety for its part in halting the first Rwanda flight last month, and delaying future ones. With the help of the law firm Duncan Lewis – known as the legal aid king of the solicitors’ world and boasting a multi-million annual turnover at the last count – it fought the Home Office plan with huge determination.

After collecting more than £100,000 from crowdfunding to cover legal fees, C4C was a crucial Government opponent during five days of legal wrangling in the High Court and Supreme Court to stop an initial 130 migrants being deported.

After a successful 11th hour appeal to the European Court of Human Rights, the deportees were removed from the Home Office’s privately chartered plane just before it was due to fly out.

A judicial review on the Home Office plan is now due this autumn.

On the crowd-funding website, C4C is still begging for donations to stop migrants ever being sent to Africa. In an emotive plea, it says: ‘Help us challenge the shameful Rwanda deal’. 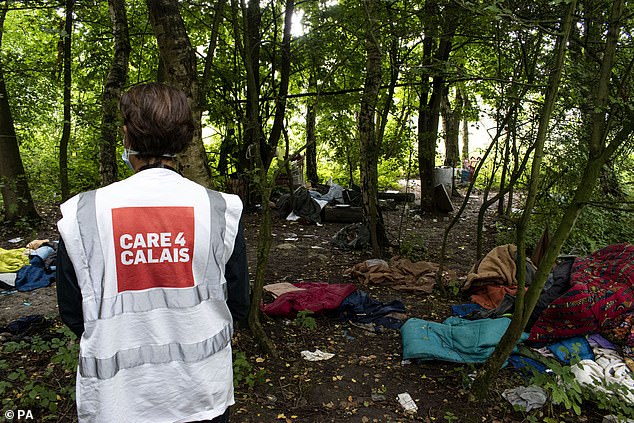 It warns that the Government is still planning to ‘forcibly remove people seeking asylum in the UK to an African country with a notorious history of human rights abuse’.

Of course Rwanda would disagree with the charity’s view. Government officials there have told the Mail that it will provide sanctuary to ‘thousands’ of migrants who are stuck in UK hotels in a ‘broken’ British asylum system caused by sheer numbers crossing the Channel in traffickers’ boats or hidden in lorries on ferries. Meanwhile, C4C says it is delighted with the Heathrow publicity. It chirrups: ‘Most people in the picture were awaiting the result of asylum applications when it was taken.

‘Its use at Heathrow is a wonderful statement… at a time Home Secretary Priti Patel is shamefully trying to send them to Rwanda.’

Adding a telling jibe, it comments: ‘The photo’s selection shows that at least some people in government understand the importance of welcoming refugees to the UK.’

The charity’s website also contains a picture story entitled ‘A busy day in Dungeness’ with volunteers’ giving blankets to boat arrivals, some of them children, on the beach this spring and summer. The accompanying message, with another request for funds, says: ‘The refugees’ resilience always amazes.

‘It seems a sign of the undefeated spirit that characterises these people who we should be proud to welcome to our shores.’

It adds elsewhere on its site: ‘We are not politicians, we are people like you who simply believe that every human has the right to be treated in a fair and dignified way.’

That is a debatable point. Many would say C4C seems very political indeed. It is not known how the charity got clearance, or from whom, to have a volunteer inside the security-ringed Dover dockside greeting migrants, or on Dungeness beach speaking to, and touching arrivals before they are safety-vetted.

It is a matter of wonderment that they are operating at government-requisitioned migrants’ hotels which are barred to the general public.

On Sunday, the Home Office, after several inquiries from the Mail over the past ten days, seemed equally mystified.

‘Care4Calais has never had a formal or informal role in our response to these dangerous and unnecessary crossings,’ said a spokesman. ‘These photographs were taken… in an area of Dover harbour where the charity had no permission to be.’

She added that the volunteer’s unauthorised presence had been detected, and they were ‘escorted from the site’.

She did not elaborate on how long this was after May 17 (the last date the Mail has pictures of the charity’s volunteer inside the port security cordon).

The department said the Government-endorsed Heathrow photo had been entered into the competition by one individual.

It declined to comment on C4C’s access to migrants’ in an escalating number of hotels for which the Home Office is responsible.

The spokesman added that The Home Office has no ‘facilities’ at Dungeness beach where C4C said last week its volunteers had greeted 67 migrants since the start of July.

Meanwhile, the charity explained that the arriving migrants had been given sliders, socks, joggers, oat bars, water, blankets, hats, hoodies, t-shirts, underwear, nappies and handwipes as part of its ‘welcoming’ work.

In a statement last night it added: ‘In Dover we were able to freely walk to the area where the boats arrive to welcome the refugees, offering them a friendly face. There was never any suggestion from the various officials that this was a problem.

‘On 17 May we were informed that we must stop this and request permission from Dover Harbour Board to continue. Permission was then denied. We have at all times complied with the instructions of officials who are present’

‘When possible we provide asylum seekers with mobile phones, kindly donated by the public. In the UK hotels, it enabled them to contact lawyers about their asylum cases and to use free Wi-Fi hotspots to do so.’

The charity said the Heathrow picture was ‘amazing news’.

It was taken by Frederic Aranda, a successful portrait photographer who, according to its website, ‘works’ with asylum seekers in an east London hotel.