Home » World News » Villagers launch £11,000 appeal to save one of Britain's oldest trees

Villagers launch £11,000 appeal to save one of Britain's oldest trees 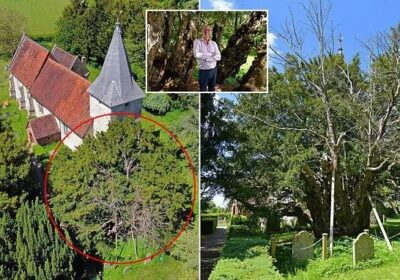 Villagers launch £11,000 appeal to save one of Britain’s oldest trees: Locals raise cash to build wooden cradle around 3,500-year-old ancient yew that could collapse after being damaged in heavy snowfall

One of Britain’s oldest trees is in danger of collapse after being damaged by snow with villagers launching an £11,000 appeal to save it.

The ‘Ancient Exceptional’ yew first sprang to life in the Stone Age and is so old it has witnessed the Roman invasion, the arrival of Christianity and the Industrial Revolution.

But after 3,500 years of life, a heavy snowfall three years ago saw parts of the now ‘fragile’ tree – considered one of the country’s ten most important – fall down.

Villagers are now appealing for help to raise £11,000 to build a wooden cradle to support it and prevent its demise.

The yew – which at its widest is 30ft in diameter sits – in the churchyard of 12th century All Saints in the heart of the village Farringdon in the South Downs National Park, Hampshire, and is cherished by the local community. 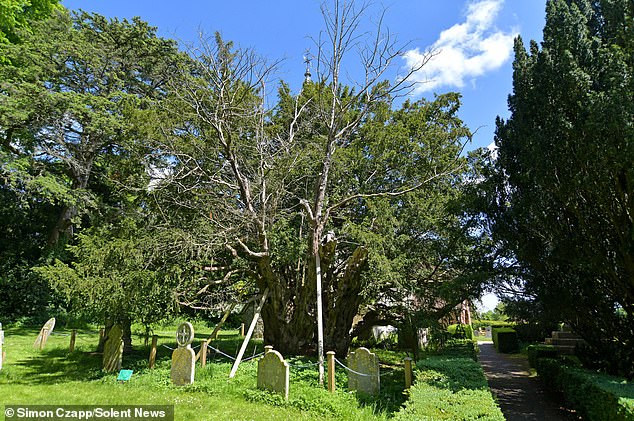 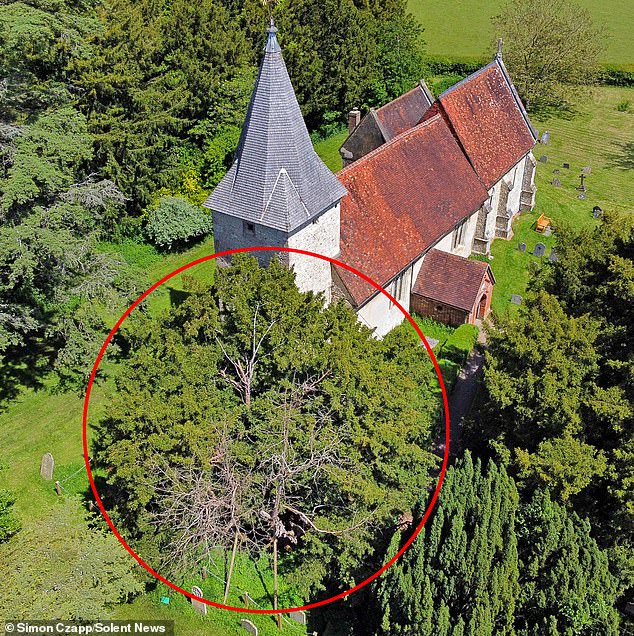 After 3,500 years of life, a heavy snowfall three years ago saw parts of the now ‘fragile’ tree – considered one of the country’s ten most important – fall down

Farringdon’s oldest resident, as well as another 1,500 year old yew which stands close by, featured in the world famous naturalist Gilbert White’s journal.

The pioneering ecologist wrote in 1781: ‘In the churchyard are two male yew trees, the largest of which measures 30 feet in girth.’

Snowfall in February 2019 saw parts of the tree collapse and required a temporary wood structure support to be built.

The current Arboricultural contractors have taken a fresh look at the problem and have recommended that a more substantial support ‘cradle’ is required.

Bryan Orchard, a member of the Parochial Church Council, says that so far £5,000 of the funding for the structure has been raised, but a further £6,000 is still needed to ensure the yew survives for another 3,000 years.

The 72 year old, who has lived in Farringdon – close to novelist Jane Austen’s former home – for 19 years, said: ‘It is one of the ten most important trees in the UK.

‘It would be nice to see it last another 3,000 years, although I won’t be around to see it.

‘The health of the tree is now a cause of considerable concern, with several sections now in a fragile condition and requiring structural support.

‘However, take a closer look and you will see plenty of signs of healthy growth and renewal.

‘We’re trying to raise money as it’s fragile and parts of it needs support. We’ve been working to try and find the structure without infringing the beauty of it.

‘We just want to make sure it’s secure for future generations.

‘Today, visitors to the churchyard and walkers following the Jane Austen trail from nearby Chawton, marvel at the hollow centre and wonder just how the tree continues to grow.

‘But grow it does, which is why this nationally important tree should not be allowed to deteriorate any further. 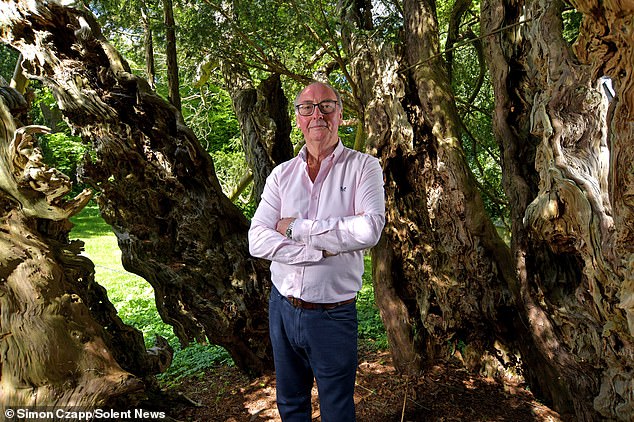 Bryan Orchard, a member of the Parochial Church Council inside the hollow trunk of the 3,500 Yew tree in the grounds of All Saints Church in Farringdon

‘To ignore its plight, would be a dereliction of duty to the heritage of UK and to future generations.’

Anne Charrington, a church warden and chairman who has lived in Farringdon for more than 45 years, said she wants to save the tree not for the residents in Farringdon itself but for the whole of the UK.

The 71 year old former nurse said: ‘I feel the Yew Tree really is the village tree that happens to be in the church yard but it was here so many years before the church.

‘The tree is a huge responsibility for this building. We have it on our land but we feel it much more belongs not just to the village, not the county, but the nation.

‘We have to do something about this tree.

‘The county councillors have given us money to help towards it but if the council’s funds are not used, they will ask for the money back to use elsewhere.

‘We’re in a position now where we feel we need to delve into our church funds – we just had to spend £25,000 doing up the church roof.

‘These trees are important because they’re so old and their ecology is unique – they house special beetles and insects.’

The South East of England has the highest concentrations of ancient yews in Britain.

The trees are a symbol of both death and resurrection as the old drooping branches can root and form new trunks and consequently churches are often built beside them.