Victory for residents who barricaded road to block school-run parents 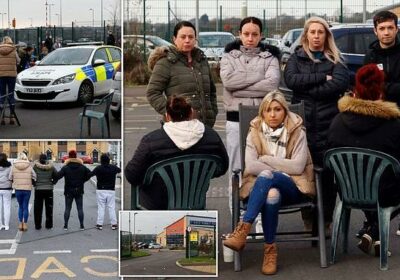 Battling Welsh residents who barricaded their road with deckchairs to stop parents driving into their housing estate during the school run have declared victory today.

It comes as the drop-off zone at the Brynmenyn Primary School in Bridgend, South Wales, is finally set to be re-opened by council bosses.

The access road had been closed for ‘health and safety’ reasons during Covid, leading to nearby streets being filled with parents in cars dropping off their children.

Fuming neighbours, who live just yards from the 200-pupil school, said the situation was making their children less safe, while claiming their turfs were being dug up and fences hit by the influx of vehicles.

They decided to hit back by sitting in deck and garden chairs across their road, leading to heated arguments and even the police to be called, with one parent claiming he was verbally abused by one of the locals and branded a ‘scruffy c***’.

To avoid tensions spilling over once more, Bridgend County Borough Council has now decided to re-open the drop-off zone after February half term – albeit for approved users only.

It comes after police were called to Lon Derw street when one furious resident squared up to father-of-two Dwayne Roberts as he parked his van.

Mr Roberts, 33, said: ‘I clean windows on this estate so I had my van as I was going straight on to work after dropping the boys off. 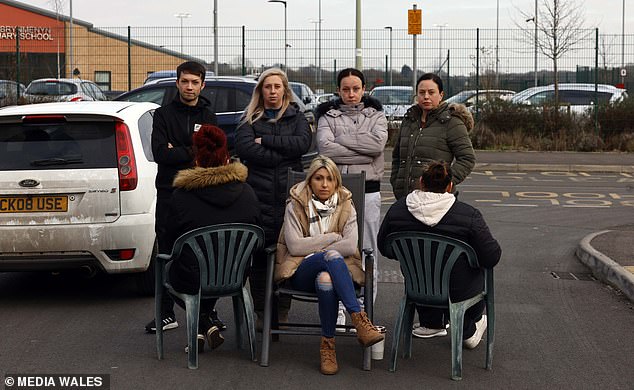 Fuming neighbours, who live just yards from the 200-pupil school in South Wales, decided to hit back by sitting in deck and garden chairs across their road (pictured), leading to heated arguments and even the police to be called, with one parent claiming he was verbally abused by one of the locals and branded a ‘scruffy c***’. 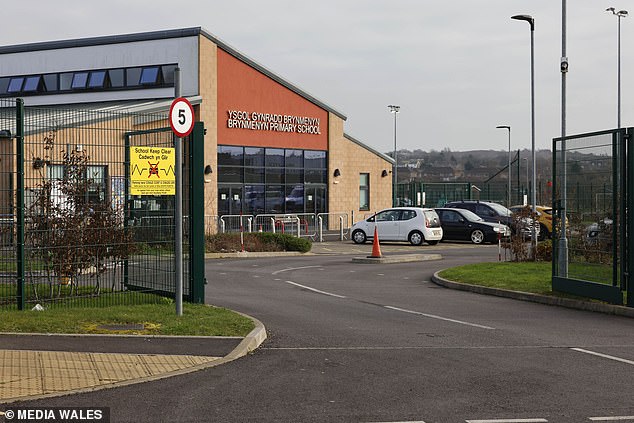 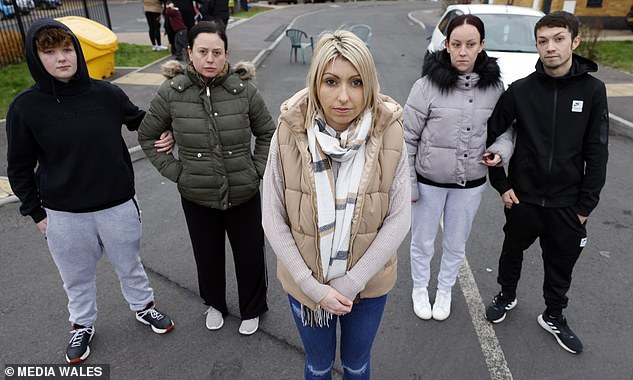 ‘As I got out of the van, this guy squared up to me started effing and blinding at me, calling me a scruffy c*** and all sorts.

‘I put my hands on his arms in a peaceful way to try and calm him. But he slapped my hands away with his fists and yelled more abuse.’

Two police vans with four officers turned up to calm tensions following the incident in January.

Nikita Jones, 24, who joined the barricade, said: ‘We’re no longer putting up with parents using our streets as a drop-off and parking zone. It’s dangerous.

‘There isn’t enough room for them to safely turn their cars around on the estate, which is a cul-de-sac so parents cannot drive through it.

‘They have to turn round, and in doing so, they were nearly hitting pedestrians, including children, blocking driveways, knocking into fences and being a nuisance generally.’ 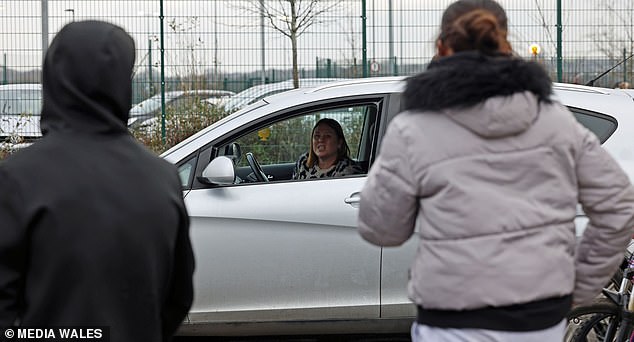 Speaking last month, resident Jessica Upham said: ‘People have been parking on our driveways, all the grass has been turned up, they’ve damaged cars, fences, drains have all been lifted’. (Pictured: Parent encounters fed-up residents)

Speaking last month, resident Jessica Upham added: ‘People have been parking on our driveways, all the grass has been turned up, they’ve damaged cars, fences, drains have all been lifted’.

Bridgend County Borough Council decided to close the drop off zone in December due to safety concerns.

The council says it will reopen the drop off zone for approved users only after the February half-term break.

Approved users will need to complete an application process which will be explained to parents and carers separately by the school.

Extra measures have now been added by the council including speed cushions, a 5mph speed limit on school grounds and a ban on reversing.

Cllr Charles Smith, of BCBC, said: ‘These updated arrangements will be closely monitored and, if the risk becomes too great, the local authority will not hesitate to put further restrictions in place.

‘The situation is not an easy one to manage, and pupil safety remains our number one priority, one which quite rightly takes precedence over all other considerations.

‘I know that the schools will be grateful for the support of parents and carers in this matter, and I would ask that all those who are arriving by car to please ensure that they drive safely, take other road users into consideration, follow any instructions from staff and officers, and treat them and others with respect.’