The Victorian government has won a six-month extension of its powers to declare the coronavirus pandemic an ongoing state of emergency, following a marathon debate overnight.

The first vote in the Parliament of Victoria saw 21 MPs vote in favour of the Public Health and Wellbeing Amendment Bill passing and 18 against it, shortly after 9pm. 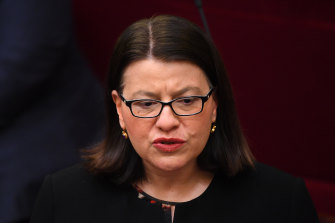 The final vote, following a debate of the legislation's technical details, took place just before 2am on Wednesday, with 20 MPs voting in favour and 19 against.

Health minister Jenny Mikakos, who was heckled repeatedly throughout her speech, told the Parliament those who voted against the bill were effectively voting for a "third wave".

She also refuted suggestions the bill would give additional powers to the Chief Health Officer or the government.

"This is the most important bill … in the 21 years I have been in the Victorian Parliament. We have an ongoing public health emergency," she said.

"The case numbers are trending down but we know there is still some way to go.

"This is about extending the time to exercise the current powers under the Health and Wellbeing Act.

"This pandemic will not be finished in two weeks' time, it won't in fact be finished in six months, this will be going into 2021 because we know in all likelihood there will be no vaccine …. within that six-month period."

But others were scathing of her response, questioning the Health Minister on what would happen if a vaccine never became available.

Reason Party MP Fiona Patten also raised concerns over the unprecedented level of "viciousness and aggression" her office had seen in correspondence from the public during what she said was an extraordinary couple of weeks.

"This is not our last pandemic," Ms Patten said.

The result came as Greens leader Samantha Ratnam made an unexpected return to Parliament from maternity leave and cast her vote in the upper house in favour of the government's bill.

The Green’s vote gave Labor the numbers it required to overcome the resistance of the Coalition and most of the crossbench and pass the legislation with the support of two other crossbenchers.

In return, Health Minister Jenny Mikakos agreed to provide Parliament with the Chief Health Officer's advice each time the government renews its state of emergency.

It drew criticism from Opposition Leader Michael O’Brien who accused the Greens and Labor of working together to prolong the lockdown.

The next step of the process, passing the bill in the lower house where Labor commands a large majority, is due later in the week.

The state recorded 70 new coronavirus cases and five deaths on Tuesday, and 570 Victorians have died of COVID-19 since the start of the pandemic.