Victoria training an army of hundreds of reserve contact tracers A reserve workforce of hundreds of contact tracers armed with local knowledge will be on standby to battle coronavirus outbreaks, as a key part of Victoria’s overhauled contact tracing strategy.

The head of the state’s contact tracing team, Professor Euan Wallace, believes that the new system will be able to cope with at least 2000 daily coronavirus cases a day if needed. 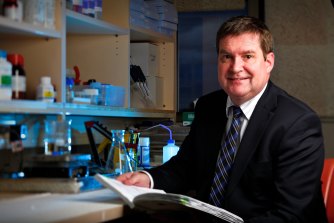 Victoria’s Chief Health Officer Brett Sutton said on Tuesday that he thought the state’s case contact and outbreak management was “the best in Australia” and could be scaled up to meet resurging cases if needed.

But GPs who have witnessed failings in the health department’s management of coronavirus outbreaks, including long delays in contact tracing, remain dubious about the capacity for significant reform.

Professor Wallace said improvements would be delivered without any significant increase to staff. Instead, pen-and-paper interviews were ditched as technology was upgraded and contact tracing had been delegated to local workers that knew their communities best.

Authorities are also testing a system that will automatically alert contact tracers to positive cases, while a link is sent to patients so they can begin answering questions online before the first call is made.

Professor Wallace said it could take another month to six weeks until Victoria fully decentralised its system for managing coronavirus outbreaks and the 12 new public health units established across the state were fully operational, as staff were still be trained.

While the regional units have been operating for months, Professor Wallace said the health department’s central team had recently conducted case interviews in Melbourne’s northern suburbs outbreak, as the final three metropolitan units were still being established last week.

He said six metropolitan and six regional units would likely have a permanent team of about a dozen people, with up to 50 more who usually worked in different jobs, but were trained in contact tracing to be called upon if needed.

“There's another 600 or 700 staff instantly on tap that you can switch on overnight,” Professor Wallace said. 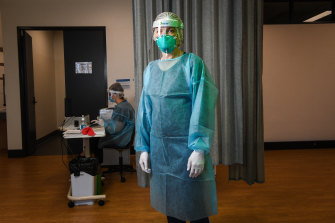 Melbourne GP Dr Catherine Orr has treated about 100 patients who have tested positive for coronavirus.Credit:Justin McManus

“A lot of the time we are told [changes] will happen, and three months down the track it doesn’t happen,” she said.

The 12 public health units that have been established in Victoria will remain after the coronavirus pandemic ends, where they could be involved in leading immunisation programs or contact tracing for other diseases such as measles.

Terry Slevin, head of the Public Health Association of Australia, said while it was clear that Victoria’s contact tracing system had been improved, it was simply not possible to expect Victorian authorities to establish a system within months to the standard of that in NSW, which had evolved over decades.

In August the health department said it had “well over 2000 people” undertaking contact tracing, and Professor Wallace confirmed that the workforce wouldn't grow enormously.

“They just have local intel and knowledge … and they just ask questions … that are much more informed, because they know the local community,” he said.

Barwon Health, which covers the Geelong corridor, was the first to introduce local contact tracing using a reserve workforce of health professionals. There have been no cases in greater Geelong for weeks, despite the area recording 366 cases during the pandemic.

Former Yarra mayor Misha Coleman, who lobbied to establish local contact tracing, said the state would be better equipped to deal with coronavirus and other diseases once the public health units were fully operational.

“It’s a huge undertaking to rebuild a whole new system in the middle of a pandemic,” she said.

Ms Coleman, who is on leave from her position at Global Health Alliance Australia, said Victoria’s health system had suffered from years of underfunding.

“The situation with our public health capacity in Victoria has arisen because of progressive defunding that dates back to the Kennett government.”