Vegans are outraged at new ‘crowdbutching’ website buyacow.uk which lets customers chip in for part of an animal before it is butchered in a bid to reduce food waste

Vegans are outraged at a new scheme which lets people buy parts of an individual cow and have it dropped off at their door after it’s slaughtered.

Buyacow.uk aims to reduce food waste by ensuring the whole of each cow is used and launched in the Netherlands in 2014.

But now it has come to the UK, offering British buyers the chance to pay for a percentage of an individual cow.

When every part of the animal has been bought, it goes to an artisan butcher where the meat is hung for three weeks before delivery. 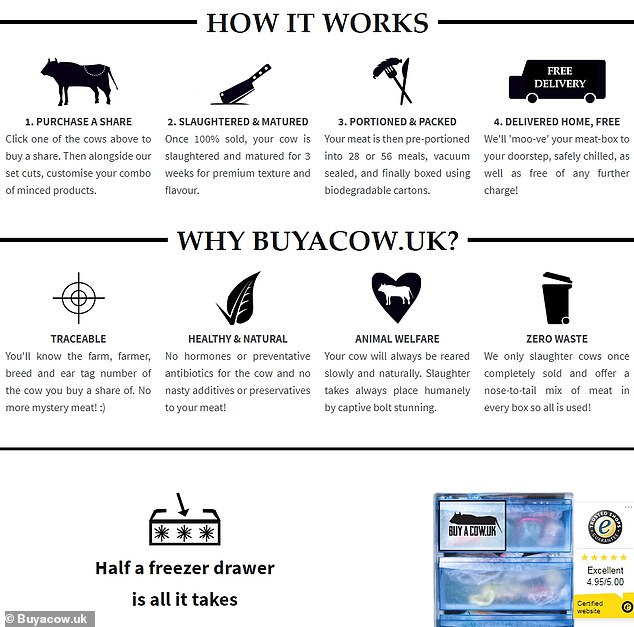 ‘Crowdfunding, or crowdbutching, is a brand new concept in meat shopping,’ he said. ‘Nothing is wasted. Only when the entire cow has been bought does it go to the butcher.

‘What’s more, the entire cow is used. Everything is sold, from nose to tail. Even the hide and bones are re-purposed.’

But vegan campaigners PETA called the scheme ‘fraudulent’, emphasising that the animals would still die in an abattoir and highlighting the environmental impact of cattle farming.

Iman Fatehi, from Buyacow.uk said they were responding to a desire for locally-sourced meat so they knew what they were eating and where it came from.

He said: ‘Matt is passionate about sustainability and animal welfare and the ethical practices he’s undertaken have helped to rear some of Somerset’s most sought after grass-fed cows. We only work with the best, most reputable farmers.’ 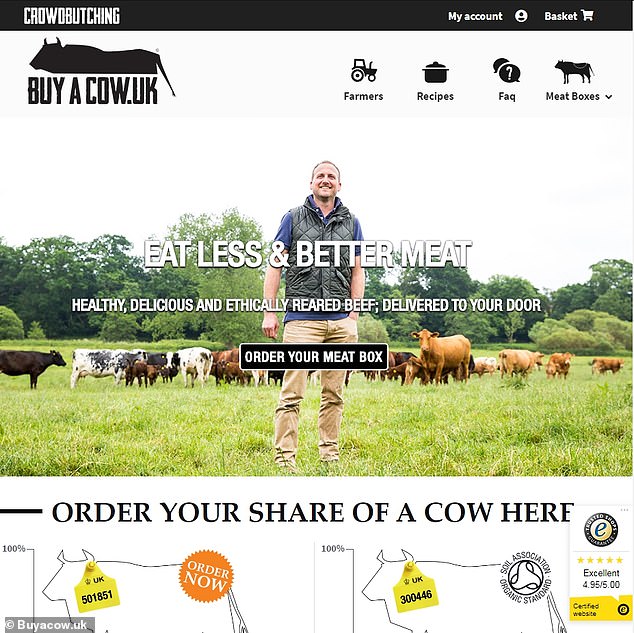 But PETA Director of International Programmes, Mimi Bekhechi, said: ‘This fraudulent attempt to repackage killing animals as ‘ethical’ and ‘sustainable’ is nothing new, but these labels are intended to make consumers feel better, not to benefit animals or the environment.

‘At a time when so many people are losing their appetite for animal flesh – in fact, Britain’s vegan population is now 3.5 million strong – it’s no surprise that meat producers are scrambling.

‘It’s a fact: raising and killing animals requires more resources and causes more greenhouse-gas emissions than growing plant-based foods. And none of these animals goes willingly to their death.

‘They’re transported, terrified, to the abattoir, where many are shot, hung upside down, and bled to death.

‘When it comes to animals, human health, and the planet, delicious vegan foods – of which there are plenty – are always the winning choice.’