Vale, John Elliott, one of the country’s great characters 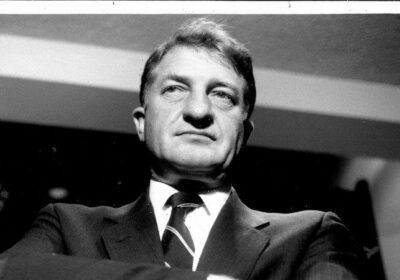 To some, John Elliott will be remembered as a brilliant star who exploded across the corporate firmament during the 1970s and 1980s – a white knight who saved the Melbourne business establishment and built a corporate empire virtually from scratch.

Sadly, perhaps more will recall a corporate buffoon who lost the plot and became a media tart. The footy loving Elliott was one of the country’s great characters, who brought colour and personality to the often grey world of business. He often said it was his ability to “never look back” that kept him going. 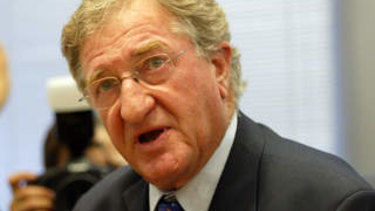 Others might say it was an inability to reflect. Elliott would have said “pig’s arse” – a favourite expression that attached itself to his public persona – to this. But in latter years his own life became a bit of a “pigs arse”.

One of the few things Elliott did publicly lament was that he never found a seat to propel him into national politics. The congenitally gregarious former federal president of the Liberal party, once one of their largest fundraisers, was convinced he had what it took to become the country’s leader. Indeed, in May 1986, when Elliott and Robert Holmes a Court were negotiating over the future ownership of Australia’s largest company, BHP, the urbane Western Australian corporate raider appealed directly to Elliott’s inner politician. “We’d get to buy the shares,” said Holmes a Court, summing up his offer, “and you’d get to be Prime Minister of Australia.”

It was not to be. In public debate Elliott once promoted a dry conservative line, but in time it degenerated into a reactionary rant reminiscent of Pauline Hanson or John Singleton. Labor was anathema and the Greens simply baffled him.

Nor did Elliott ever achieve the long-term financial independence he craved. In the years following his encounters with Holmes a Court, the wheels fell off the Elliott corporate juggernaut in the same spectacular fashion as his success had been won. Yet despite the catastrophes and public humiliation that dogged that last 25 years of his life, on a personal level Elliott remained mostly a charming man, the life of the party, charismatic to many.

He was witty, warm-hearted, a man clearly devoted to his children and grandchildren, fun to be around. His distinctive laugh was as expansive as it was raucous. Those closest to him said his personal loyalty and generosity knew no bounds.

Elliott loved to party (he referred to it as bonding), which no doubt contributed to his demise.

JD, as he was known in the early years, with his phenomenal stamina, grasp of detail and forensic due diligence, slowly gave way to the shambling caricature of “Big Jack”, beer in hand, regaling the crowd with stories of heroic past deeds. He loved to quote trite Winston Churchill aphorisms. One of his favourites was that “A pessimist sees the difficulty; an optimist sees the opportunity in every difficulty”. Elliott had his share of difficulties over the years. 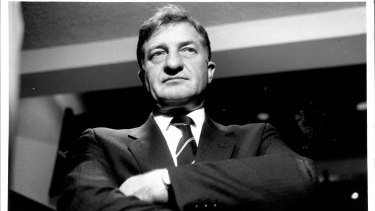 John Dorman Elliott was born on October 3, 1941 in Melbourne, oldest of three sons of Frank Elliott, a deeply religious man who began his career as a bank clerk and rose to become advertising manager of the ANZ banking group, and his wife, Anita (nee Dorman), whose father had run successful bakery and milling businesses throughout Victoria. Home for nearly all of Elliott’s childhood was a modest, comfortable red brick bungalow in Kew East and life revolved around the school, church and, increasingly as the boys grew up, Australian football.

But a severe case of often fatal osteomyelitis in Elliott’s left heel when he was aged 6 nearly put an end to any future sporting activity. But after nine months in bed, wheelchairs and a leg calliper, he made a complete recovery. John was thickset and with a large backside. He was educated at Carey Grammar, where he earned his first nickname, “Egg”. He was also an emerging leader in the schoolyard. “We often played games like Hitler … and John would always have a starring role,” recalled one friend. The headmaster at the time, Stewart Hickman, concerned that the boys were not singing well in chapel, once said to his teachers: “We need to find the hymns that John Elliott likes best and sings lustily, and the whole school will sing with him.”

Unfortunately for Carey Grammar, singing did not interest to Elliott. Football was his passion. He was not fast, but used his weight to advantage and was good at reading the game. It also provided an outlet for his highly competitive spirit. He continued to play for his school as an old boy until he was 38.

When Elliott realised university would provide opportunities, he knuckled down to study in his final year and in 1958 won both Commonwealth and BHP scholarships to Melbourne University to study commerce.

An above average student with a stunning ability to cram, at university Elliott revived the defunct Commerce Society. It was also a convenient front for an intensive card school and offered liberal incentives to the faculty’s football team in the form of free beer.

But having to do clerical work for BHP in distant Newcastle during the summer holidays soon palled. With a third-class honours degree in economics, Elliott began rethinking his career options.

He spent two years at BHP after graduation, invoicing aircraft parts, but when told he would have to wait until he was 30 for a decent executive position, he quit to do an MBA. Then, in 1966 he joined an American management consultancy, McKinsey and Co.

In May 1965, Elliott married Lorraine Golder, pretty, academically inclined young woman who was studying to be a teacher. They would have three children, Tom, Caroline and Edward (and Lorraine would go on and went on to be Liberal member for Mooroolbark in the Victorian Legislative Assembly from 1992 to 2002.

McKinsey and Co provided Elliott’s entree into Melbourne’s business establishment and his first taste of corporate management at a senior level. One of his first big successes was turning around the financial fortunes of a large retail chain in the United States while on secondment to McKinsey’s Chicago offices, but he was homesick so returned and stayed with McKinsey for another 18 months before deciding to go out on his own in 1972.

Elliott’s stellar career trajectory over the next 15 years is legendary. It began with a roughly typed list of more than 300 possible takeover targets. The 31-year-old entrepreneur’s aim was to find the right public company, suitable financial backers and then take control.

Selling off unwanted assets and internal rationalisations would, in theory, pay for the exercise, leaving a tightly run, cashed up corporate entity that would continue to grow. He and his management team would take a 5 per cent stake in the new venture.

When Elliott went to South Africa to check the company’s assets there, it was the first visit from head office in 12 years. The clerks still stood at their desks with quill pens. But It had between $30 million and $50 million in book assets, many of which could be rationalised.

The takeover was successful and profitable, and was soon followed by other acquisitions. The more spectacular included the reverse takeovers of the South Australian pastoral house Elder Smith Goldsborough Mort (rebadged as Elders IXL) and Carlton United Breweries, home of the famous Foster’s brand, which Elliott once described as like “angels crying on your tongue” Elliott’s management team of Bob Cowper (the former test cricketer), Richard Wiesener, Peter Scanlon, Ken Jarrett and Geoff Lord were dubbed the “whiz kids” by the financial press. One recalled the period as the biggest, most sustained adrenalin rush they would ever know.

The deals were now in billions of dollars being played out on an international stage. The Elders conglomeration was one of the largest businesses in the country, turning over more than $16 billion a year, with 20,000 employees and interests in pastoralism, brewing, food processing, commodities trading, resources and finance.

The company’s much used corporate jet, dubbed the “flying beer can” became Elliott’s second home. He was drawing a salary of more than $1 million a year on top of his equity holdings.

But he was also turning heads with the level of his political commitments. In 1986, on the day his company was spending hundreds of millions buying a stake in BHP in the biggest corporate play in Australian history, Elliott was in Sydney making two speeches for the Liberal party.

Then came the breakup of his first marriage, the marriage to Amanda Bayles in 1987, and the first Foster’s million dollar Melbourne Cup.

However, the beer baron, now part of the polo set, was done for drink driving and the first public suggestions surfaced that he might have taken his hands off the wheel at Elders. Others were concerned Elliott was burning up inside because he was not his own man. Many of those he rubbed shoulders with in New York and London were business owners. Elliott, still a manager, confided to friends that he sometimes felt like a hillbilly colonial who hadn’t been smart enough to make it on his own.

In 1989, Elliott and his team attempted to remedy this with a so-called management buyout of the Elders group. (Co-incidentally, his involvement in civic affairs peaked as chairman of the Committee for Melbourne from 1989 to 1993.)

It was a complex bit of corporate trickery that would have yielded him about $66 million. He escaped jail on a technicality, but one of his former best mates, Ken Jarrett, spend six months locked up over the affair.

Elliott doggedly spent millions trying to extricate himself, at one stage selling his $11 million Toorak home to pay his lawyers bills, without telling his wife. He was convinced it was all a political conspiracy.

Then, in 2000 his own extensive farming and milling operations went bankrupt after several million dollars worth of rice disappeared.

Within a few years he was reduced to borrowing money from “friends” to survive. Rumours abounded of secret European bank accounts. Yet he still shrugged it off in public. He told one television interviewer: “I fought a number of law cases and battles which I didn’t win, even though I should have. It cost me about $11 million, and a couple of wives cost me about $7 [million]. I ran out of money.”

Elliott was out of touch, a figure of fun. Perhaps the greatest humiliation came in 2002 when, after 20 years as president of his beloved Carlton Football Club, he was sacked after the club breached salary cap conditions for its players. The club, in a strikingly familiar scenario, was also teetering on the edge of bankruptcy. Then followed incidents at the club’s bar that Elliott couldn’t remember. Many blamed him for the club winning the wooden spoon in 2002.

In a final act of vindictiveness, his name was removed from club signs at its home grounds. Yet Elliott, almost to the day he died, could still put on a show. He was a remarkable character, loved and hated in equal measure, one of the nations great business characters.

John Elliott is survived by his partner, Joanne Hurley, his children Tom, Caroline and Edward from his first marriage, daughter Alexandra from his second marriage, step-daughter Edwina from Amanda’s previous marriage, and their families.

Peter Denton is the author of Elliott – A biography of John D. Elliott. His latest book is an e-novel, The Feast of the Bunya.