Washington: The US Justice Department secretly took steps in 2017 to narrow the investigation into Russian election interference and any links to the Trump campaign, according to former law enforcement officials, keeping investigators from completing an examination of President Donald Trump's decades-long personal and business ties to Russia.

The special counsel who finished the investigation, Robert Mueller, secured three dozen indictments and convictions of some top Trump advisers, and he produced a report that outlined Russia's wide-ranging operations to help get Trump elected and the president's efforts to impede the inquiry. 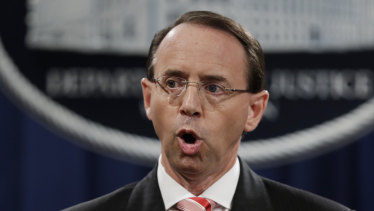 But law enforcement officials never fully investigated Trump's own relationship with Russia, even though some career FBI counterintelligence investigators thought his ties posed such a national security threat that they took the extraordinary step of opening an inquiry into them.

Within days, the former deputy attorney-general Rod Rosenstein curtailed the investigation without telling the bureau, all but ensuring it would go nowhere.

A bipartisan report by the Republican-led Senate Intelligence Committee released this month came the closest to an examination of the president’s links to Russia. Senators depicted extensive ties between Trump associates and Russia, identified a close associate of a former Trump campaign chairman as a Russian intelligence officer and outlined how allegations about Trump's encounters with women during trips to Moscow could be used to compromise him.

But the senators acknowledged they lacked access to the full picture, particularly any insight into Trump's finances. 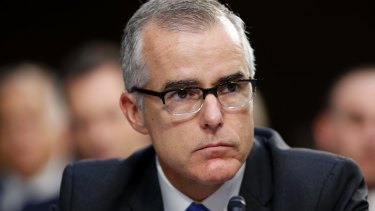 He has repeatedly shown an openness to Russia, an adversary that attacked US democracy in 2016, and he has refused to criticise or challenge the Kremlin's increasing aggressions toward the West.

The president has also rejected the intelligence community's finding that Russia interfered in 2016 to bolster his candidacy and the spy agencies' assessment that Russia is trying to sabotage this year's election again on his behalf.

Rosenstein concluded that the FBI lacked sufficient reason to conduct an investigation into the president's links to a foreign adversary. Rosenstein determined that the investigators were acting too hastily in response to the firing days earlier of James Comey as FBI director, and he suspected that the acting bureau director who approved the opening of the inquiry, Andrew McCabe, had conflicts of interest.

Rosenstein never told McCabe about his decision, leaving the FBI with the impression that the special counsel would take on the investigation into the president as part of his broader duties. McCabe said in an interview that had he known Mueller would not continue the inquiry, he would have had the FBI perform it.

"We opened this case in May 2017 because we had information that indicated a national security threat might exist, specifically a counterintelligence threat involving the president and Russia," McCabe said.

"I expected that issue and issues related to it would be fully examined by the special counsel team. If a decision was made not to investigate those issues, I am surprised and disappointed. I was not aware of that."

The disclosure about the counterintelligence investigation is based on interviews with former Department of Justice and FBI officials. 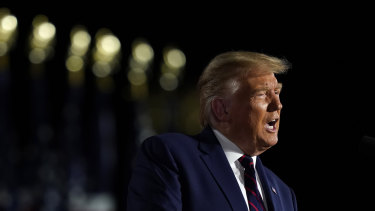 Installing Mueller as special counsel in May 2017, Rosenstein ordered him to examine "any links and/or coordination between the Russian government" and the Trump campaign. Many Democrats embraced the appointment as a sign that law enforcement would complete a full accounting of Trump's ties to Russia.

But privately, Rosenstein instructed Mueller to conduct only a criminal investigation into whether anyone broke the law in connection with Russia's 2016 election interference, former law enforcement officials said.

"I love Ken Starr," Rosenstein told Mueller, according to a new book by journalist Jeffrey Toobin that first reported the conversation. "But his investigation was a fishing expedition. Don't do that. This is a criminal investigation. Do your job, and then shut it down."

If Mueller wanted to expand his investigation, Rosenstein told him, he should ask for additional authorities and resources.

But the special counsel built a staff — some he inherited from the DOJ and FBI, some he hired — to investigate crimes, not threats to national security, which is the purview of counterintelligence investigations.

Could the president actually be the point of coordination between the campaign and the Russian government?

Members of the special counsel team held early discussions led by agent Peter Strzok about a counterintelligence investigation of the president. Those efforts fizzled when Strzok was removed from the inquiry three months later for sending text messages disparaging Trump.

Questions about the president's ties to Russia dated to his presidential campaign.

Trump has sought to build a Trump Tower in Moscow for at least two decades, including during the campaign. His son Eric once said the Trump Organisation relied on Russia for "all the funding we need" to purchase several golf courses in the United States. And the Senate report this month revealed the allegations of Trump's potentially compromising encounters with women in Moscow in 1996 and 2013.

The FBI's mounting concerns about Trump reached a crescendo in the days after he fired Comey. Officials questioned whether Russia had leverage over the president and had dismissed the FBI director to thwart any investigation that might reveal more. Their suspicions prompted agents including Strzok to open the counterintelligence inquiry.

The investigation was separate from the broader inquiry into the Trump campaign's ties to Russia, code-named Crossfire Hurricane, that the bureau opened in the summer of 2016 to try to understand Russia's operations to interfere in the election and whether Trump's associates were conspiring with them.

The president and his allies have ramped up their attacks on that inquiry, misleadingly casting it as an illegitimate attempt by Democrats to spy on his campaign; independent reviews have found that investigators had sufficient reason to open it.

McCabe, convinced that Trump would probably soon fire him, approved the opening of the inquiry into Trump, believing he was making it more difficult for anyone to interfere with or close the case without justifying doing so.

McCabe pushed Rosenstein to appoint a special counsel to conduct the investigation into Trump and the broader examination of Russia's interference in the election. Two days later, Rosenstein appointed Mueller.

"It was the most enormous exhale of my life," McCabe said. "I had been holding my breath" since the night Comey was fired, he added.

That day, Rosenstein joined McCabe while he briefed lawmakers about matters including the counterintelligence investigation and raised no objections.

The next day, McCabe briefed Mueller and his top deputies on the investigation into the president. But McCabe did not know that Rosenstein also gave his instruction to Mueller around that time to focus on whether crimes were committed.

McCabe acknowledged that he underestimated Rosenstein's willingness to conceal from him that he had curtailed the investigation. He remained at the FBI for 10 months before being fired over displaying a lack of candour with internal watchdogs.

As McCabe left the bureau, he believed that Mueller was investigating Trump's personal and financial ties to Russia.

This article is adapted from the book "Donald Trump v. The United States: Inside the Struggle to Stop a President," being published Tuesday by Random House.