US condemns Belarus over opposition journalist’s arrest after forced landing 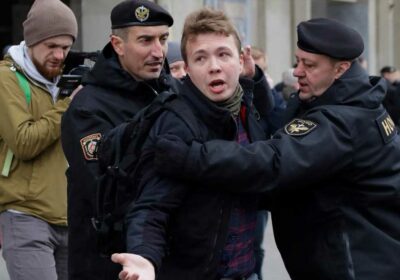 The US has condemned Belarus for forcing a passenger airplane to land for a supposed “security alert” — leading to the arrest of an opposition journalist on board.

In a statement released late Sunday, US Secretary of State Antony Blinken called for the immediate release of Raman Pratasevich, a vocal critic of Belarus President Alexander Lukashenko who was busted after the plane touched down in Minsk.

“The United States strongly condemns the forced diversion of a flight between two EU member states and the subsequent removal and arrest of journalist Raman Pratasevich in Minsk. We demand his immediate release,” the nation’s top diplomat said.

Blinken went on to note that the “shocking act” was “perpetrated by” the Lukashenko regime, while adding that it “endangered the lives of more than 120 passengers, including U.S. citizens.”

“Initial reports suggesting the involvement of the Belarusian security services and the use of Belarusian military aircraft to escort the plane are deeply concerning and require full investigation,” he said.

Blinken also said the US was working with the European Union, Lithuania and Greece to coordinate a response, as the flight was originally headed from Athens to Vilnius before being ordered by Belarusian forces to land.

Citing foreign governments, numerous reports allege that Lukashenko personally ordered a fighter jet to intimidate the plane into landing after Belarus notified the Ryanair of a bomb threat. But the airline said that “nothing untoward was found.”

“I saw this Belarusian guy with girlfriend sitting right behind us,” passenger Marius Rutkauskas said after the plane landed in Lithuania’s capital of Vilnius. “He freaked out when the pilot said the plane is diverted to Minsk. He said there’s death penalty awaiting him there.”

“We sat for an hour after the landing. Then they started releasing passengers and took those two. We did not see them again,” he continued, referring to Pratasevich.

Protests erupted against Lukashenko in 2020 after his presidential re-election was marred by accusations of fraud and rigging.

While he had faced electoral challengers before, none were as successful as 38-year-old Sviatlana Tsikhanouskaya. Lukashenko was officially declared the winner, but Tsikhanouskaya maintains that she received at least 60 percent of the vote.

She has since fled to Lithuania for political protection.

Ryanair CEO Michael O’Leary called the event “a state-sponsored hijacking,” which he alleged was directed by KGB agents.

“This is a case of state-sponsored hijacking, state-sponsored piracy. Our crew did a phenomenal job to get that aircraft and almost all the passengers out of Minsk after six hours,” O’Leary told Politico in an interview Sunday.