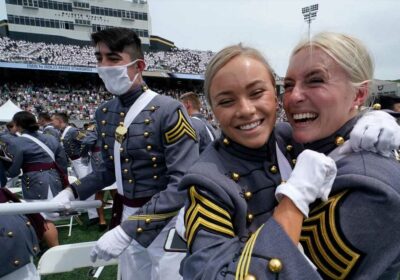 West Point expels eight cadets, holds back 53 others for cheating

Most West Point cadets in cheating scandal are athletes

Over 70 West Point cadets accused of cheating on math test

Unvaccinated cadets at the US Military Academy at West Point are getting singled out, bullied and unfairly punished — even if they have COVID-19 immunity from earlier infections, according to a report.

All but around three dozen of the 4,500 students at the centuries-old New York training academy have been vaccinated — with a spreadsheet showing the cadets’ status getting widely circulated, Fox News said.

Those not vaccinated are derided as “diseased” and “dirty” and treated as outcasts — and punished for violating mask and social distancing mandates, even after statewide restrictions have been lifted, cadets and their families told Sean Hannity.

Some cadets complain that they are unable to take any leave this summer because a seven-day enforced quarantine eats up any available time.

“It’s like solitary confinement — for a disease we don’t have,” one cadet told Fox, speaking on condition of anonymity for fear of retribution.

Others have insisted they are getting pressured into getting vaccinated, even if they know they have immunity from already being infected, one parent, Brian MacDonald, told Hannity of his daughter.

“She’s in a position where she’s had COVID, she recovered from COVID, she has the antibodies for COVID, and West Point is putting a ridiculous amount of pressure on her to take the vaccine,” he said.

“I don’t understand what the leadership at West Point is doing right now,” he complained.

Mathias Sampson, a 20-year Army veteran, told Hannity that his daughter has not had the jab because she “has valid concerns about this vaccination — concerns pertaining to fertility, long-term effects.”

“The CDC nor West Point have answers to these concerns,” he said.

West Point confirmed the authenticity of the circulated spreadsheet, saying it had been “inadvertently” disseminated, and also acknowledged some heckling of cadets over their vaccine status, Fox said.

The academy confirmed that masks are still required in indoor spaces — with unvaccinated cadets having to wear them even in shared shower and bathroom areas “when not performing personnel hygiene.”

“Though they train together and are fully integrated in all activities, unvaccinated cadets are currently being housed separately from vaccinated cadets to minimize transmission risk and are provided with equal or better living conditions,” the spokesperson also said.

“Currently, the Department of Defense is not mandating vaccinations for U.S. military members, and it remains optional but encouraged for West Point personnel,” the school told Fox.