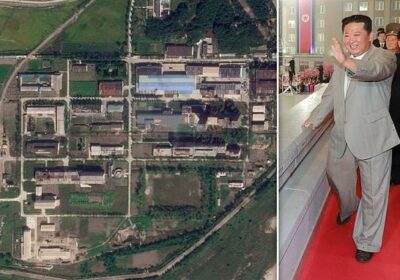 North Korea’s nuclear programme is going ‘full steam ahead’ and Pyongyang has restarted a reactor that ‘produced plutonium for nukes,’ the UN warned today.

The International Atomic Energy Agency (IAEA) last month warned of activity around a five-megawatt reactor in the country’s main nuclear complex at Yongbyon.

It produces plutonium, one of the two key ingredients used to make bombs along with highly enriched uranium.

IAEA chief Rafael Grossi said on Monday: ‘In the Democratic People’s Republic of Korea, [the] nuclear programme goes full steam ahead with work on plutonium separation, uranium enrichment and other activities.’

North Korea last week launched a ballistic missile off the back of a train in its latest show of strength after the South conducted its first successful launch from a submarine-launched ballistic missile (SLBM).

Meanwhile, Pyongyang has been backing its ally China by warning that the new security pact between the US, UK and Australia, could spark a ‘nuclear arms race’. 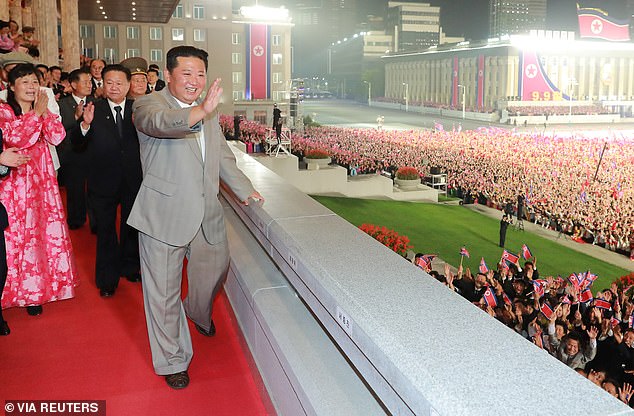 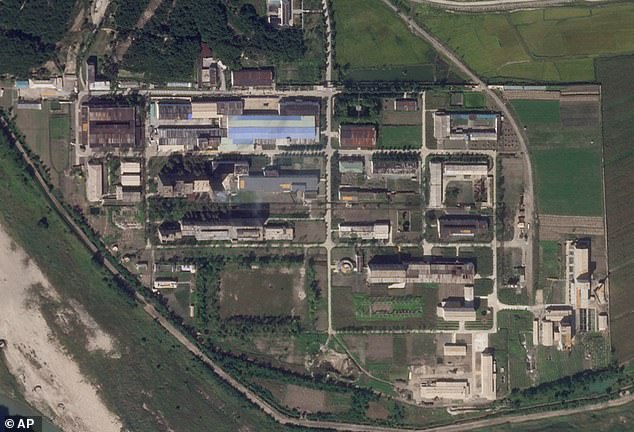 Kim Jong Un’s foreign ministry decried the Aukus alliance as one that will ‘upset the strategic balance in the Asia-Pacific region and trigger off a chain of nuclear arms race.’

As part of new strategic relationship, the UK and the US have agreed to share nuclear submarine technology with Australia.

The deal is widely-seen as an effort to counter Chinese expansion in the South China Sea. Beijing is one of North Korea’s few allies in the region.

North Korea suspended its testing of nuclear bombs and intercontinental-range ballistic missiles that could hit the U.S. mainland in 2018, when Kim initiated diplomacy with former President Donald Trump while attempting to leverage his arsenal for badly needed sanctions relief.

Nuclear negotiations between Washington and Pyongyang have stalled since the collapse of a second Trump-Kim meeting in 2019, when the Americans rejected North Korean demands for major sanctions relief in exchange for dismantling an aging nuclear facility. That would have amounted to only a partial surrender of the North’s nuclear capabilities.

The North has continued testing shorter range weapons, threatening U.S. allies South Korea and Japan in an apparent effort to pressure the Biden administration over the stalled diplomacy.

Last week, the North tested a new cruise missile it intends to eventually arm with nuclear warheads and demonstrated a new system for launching ballistic missiles from trains.

The North’s launches from rail cars on Wednesday came hours before the South reported its first test of a submarine-launched ballistic missile. The dual display of military might highlighted a return of tensions in the region.

In a separate statement Monday, the North scoffed at the South’s test, saying the missile was clumsy and didn’t appear ready for military use.

The North tested its Pukguksong-3 missile from a sea-based platform in 2019, part of a years-long effort to acquire the ability to fire nuclear-armed missiles from submarines. 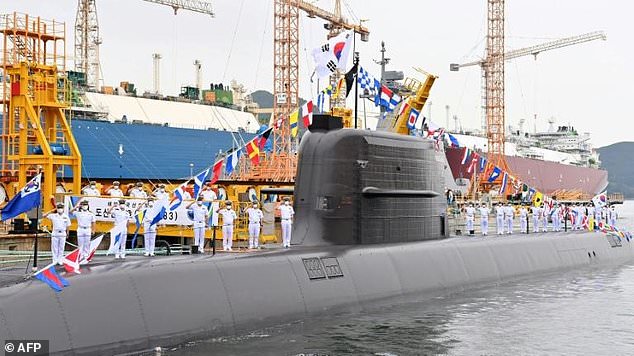 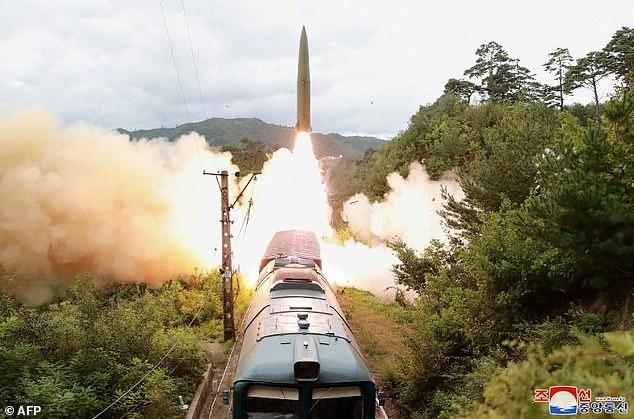 The IAEA last month issued a report which said Pyongyang appeared to have restarted the Yongbyon reactor.

The report said: ‘Since early July 2021, there have been indications, including the discharge of cooling water, consistent with the operation of the reactor.’

It added there were indications of the operation of Yonbyon’s radiochemical laboratory from mid-February to early July this year.

The report said this period of operation is consistent with previous reprocessing campaigns announced by North Korea of irradiated fuel discharged from the reactor.

The laboratory is a facility where plutonium is extracted by reprocessing spent fuel rods removed from reactors.

The IAEA said: ‘(North Korea’s) nuclear activities continue to be a cause for serious concern. Furthermore, the new indications of the operation of the 5-megawatt reactor and the radiochemical laboratory are deeply troubling.’

The IAEA has not had access to Yongbyon or other locations in North Korea since the country kicked out IAEA inspectors in 2009. The agency said it uses satellite imagery and open source information to monitor developments in North Korea’s nuclear programme.

The IAEA report said ‘there were indications, for a period of time, that the reported centrifuge enrichment facility was not in operation’ though regular vehicular movements were observed.

The complex, which North Korea calls ‘the heart’ of its nuclear programme and research, has been at the centre of international concerns for decades.

It is not clear exactly how much weapons-grade plutonium or highly enriched uranium has been produced at Yonbyong and where North Korea stores it.

In early 2019, Kim Jong Un offered to dismantle the entire complex if he won extensive sanctions relief during a summit with then-President Donald Trump. 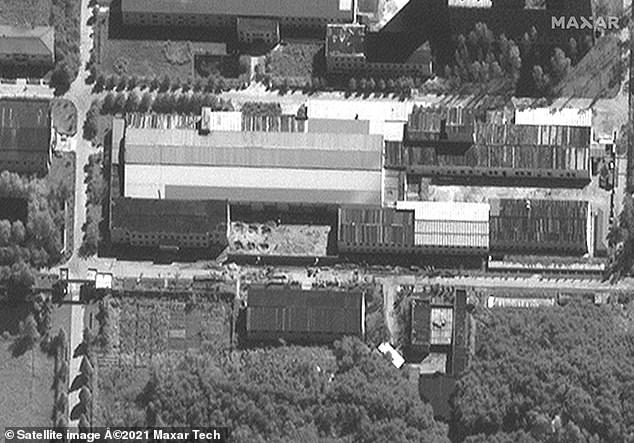 North Korea is rapidly expanding its plutonium-producing reprocessing reactor just days after it was revealed it was restarting the facility. Pictured: September 14 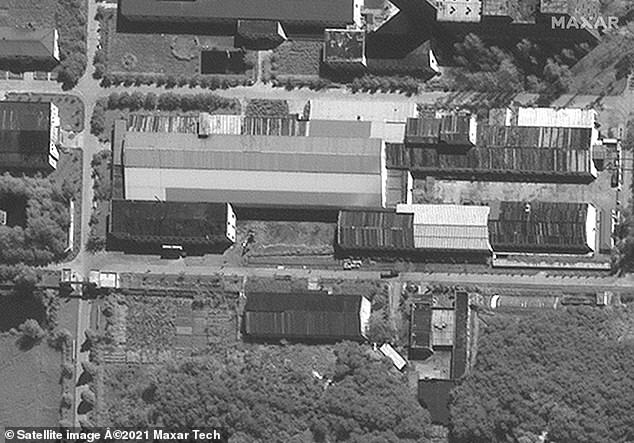 The former dormant Yongbyon Nuclear Research Facility, which is capable of enriching uranium for nuclear weapons, is being renovated. Pictured: September 1

But the Americans rejected Kim’s offer because it would only be a partial surrender of his nuclear capability.

North Korea is believed to be running multiple other covert uranium enrichment facilities. According to a South Korean estimate in 2018, North Korea might already have manufactured 20-60 nuclear weapons as well.

In recent months, North Korea has warned it would expand its nuclear programme if the United States does not withdraw its ‘hostile’ policy on the North, in an apparent reference to US-led sanctions and regular US-South Korean military drills.

But she declined to comment on whether Seoul is seeing signs that the North is reactivating its nuclear facilities.