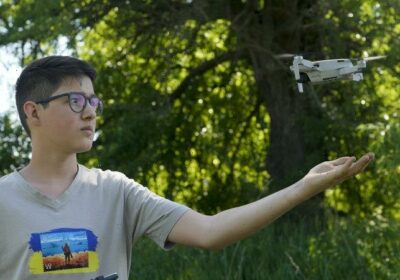 Kolonschyna, Ukraine: As Russian tanks and trucks rumbled close to their village, a Ukrainian teenager and his father stealthily launched their small drone into the air.

Working as a team, they took bird’s-eye photos of the armoured column moving toward Kyiv and pinpointed its coordinates, swiftly messaging the precious information to the Ukrainian military. 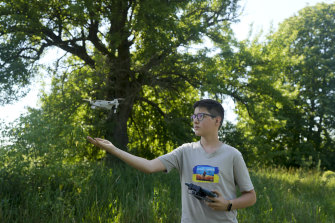 Andriy Pokrasa, 15, lands his drone on his hand. Andriy is being hailed in Ukraine for stealthy aerial reconnaissance work he has done with his dad in the ongoing war with Russia.Credit:AP

Within minutes, artillery batteries rained shells down on the invading forces, with deadly effect.

Andriy Pokrasa, 15, and his dad, Stanislav, are being hailed in Ukraine for their volunteer aerial reconnaissance work in the early days of the invasion, when Russian troops barrelling in from the north made an ultimately failed attempt to take the capital and bring the country to its knees.

For a full week after the February 24 invasion, the pair made repeated sorties with their drone — risking capture or worse had Russian troops been aware of their snooping.

“These were some of the scariest moments of my life,” Andriy recounted as he demonstrated his piloting skills for an Associated Press team of journalists. 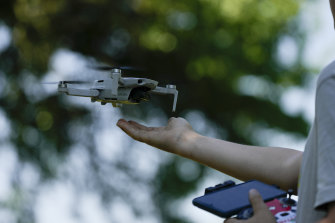 Andriy and his father used their drone to help the country’s military spot, locate and destroy Russian targets in the early days of the Russian invasion.Credit:AP

“We provided the photos and the location to the armed forces,” he said. “They narrowed down the coordinates more accurately and transmitted them by walkie-talkie, so as to adjust the artillery.”

His father was happy to leave the piloting to the boy.

“I can operate the drone, but my son does it much better. We immediately decided he would do it,” Stanislav Pokrasa, 41, said.

They aren’t sure how many Russian targets were destroyed using information they provided. But they saw the devastation wrought on the Russian convoy when they later flew the drone back over the charred hulks of trucks and tanks near a town west of Kyiv and off a strategically important highway that leads to the capital.

“There were more than 20 Russian military vehicles destroyed, among them fuel trucks and tanks,” the father said.

With all adult men up to age 60 under government orders to stay in the country, the elder Pokrasa couldn’t join his wife and son when they fled to neighbouring Poland.

They came back a few weeks ago, when Andriy had finished his school year. 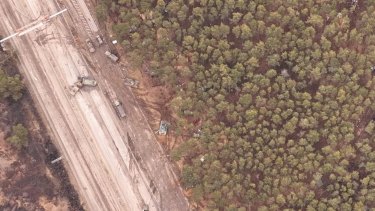 Ukrainian forces have proven more resilient than expected, but, in a report on Friday, the US-based Institute for the Study of War said that as they use the last of their stocks of Soviet-era weapons and munitions, they will require consistent Western support to transition to new Western supplies and systems.

The institute said effective artillery would “be increasingly decisive in the largely static fighting in eastern Ukraine”.

Weeks of fighting for Sievierodonetsk, a small city in Luhansk province that has become the focus of Russia’s advance in eastern Ukraine, has pulverised sections of the town and has been some of the bloodiest since Moscow’s February 24 invasion.

Russian shelling of the Azot chemical plant in the eastern Ukrainian city of Sievierodonetsk ignited a big fire on Saturday after a leak of tonnes of oil, the regional governor said, as the battle for the city raged on.

In neighbouring Donetsk province, Russian media reported that a huge cloud of smoke could be seen rising into the air after an explosion in the city of Avdiivka, which houses another chemical plant.

The governor of Luhansk, Serhiy Gaidai, did not say whether the fire at the plant, where hundreds of civilians were sheltering, had been extinguished. Reuters could not independently verify the report.

Speaking on national television, Gaidai said non-stop fighting was raging in Sievierodonetsk. He said earlier that Russian forces controlled most of the city but Ukraine controlled the Azot chemical plant.

The Ukrainian armed forces’ general staff said Ukrainian defenders repelled a Russian attack in one part of Sievierodonetsk on Saturday while fighting continues in another. 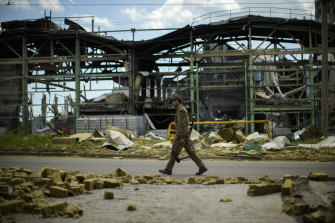 A Ukrainian serviceman outside a manufacturing plant destroyed in a Russian bombing in Bakhmut, eastern Ukraine in late May. Credit:AP

Ukrainian forces also pushed back a Russian attack on three small towns to the northwest of Sloviansk in Donetsk province, while fighting is continuing in a fourth settlement in the area, as well as to the east of the city, the staff said in a Facebook post.

Russia’s RIA news agency posted video it said had been taken from Donetsk which showed a large smoke cloud rising from Avdiivka, which is currently held by Ukrainian forces and is just north of the city of Donetsk, which is controlled by Russian-speaking separatists.

Reuters was unable to immediately to confirm the RIA report or the authenticity of the video.

Ukraine has appealed for swifter deliveries of heavy weapons from the West to turn the tide of the war, saying Russian forces have at least 10 times more artillery pieces.