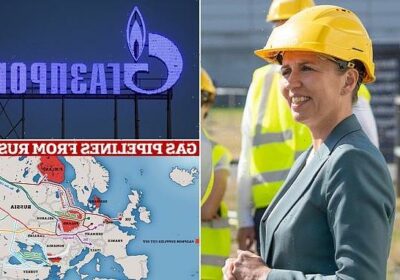 Orsted, formerly DONG Energy, said Gazprom Export had informed it that its gas supply would be halted at 6:00 am (0400 GMT).

Russia has said it will only accept payment for natural gas deliveries in its national currency, with buyers required to set up ruble accounts or have their taps turned off.

The measure came in response to a litany of international sanctions on Moscow after President Vladimir Putin ordered the invasion of Ukraine on February 24.

Denmark becomes the fifth country to see Russian gas supply cut off since the measure was announced by the Kremlin, following the Netherlands yesterday, Finland on May 21 and both Poland and Bulgaria in April.

The Danish company had anticipated the move and had previously said it was filling up its storage facilities in Denmark and Germany to secure gas supplies to their customers.

‘Since there is no gas pipeline going directly from Russia to Denmark, Russia will not be able to directly cut off the gas supplies to Denmark, and it will thus still be possible for Denmark to get gas,’ Orsted said in Tuesday’s statement.

‘However, this means that the gas for Denmark must, to a larger extent, be purchased on the European gas market. We expect this to be possible,’ it said.

The announcements follow Monday’s agreement by European Union leaders to cut the European Union’s imports of Russian oil by 90% by year-end, the bloc’s toughest yet response to the invasion.

Markets reacted to the news, with gas prices rising around 5 percent on Tuesday, raising concerns that customers could see their bills rise even higher.

Energy prices in Europe hit record highs this year after the invasion of Ukraine by Russia, Europe’s top gas supplier, with European leaders so far ruling out a price cap. 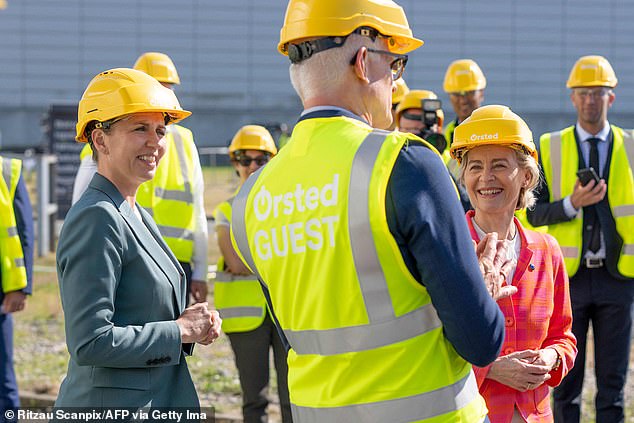 The move by the Russian gas giant is the latest retaliation to Western sanctions, escalating its economic battle with Brussels and pushing up European gas prices.

Gazprom said on Tuesday it had fully cut off gas supplies to Dutch gas trader GasTerra, and it later said it would also stop as of June 1 gas flows to Denmark’s Orsted and to Shell Energy for its contract on gas supplies to Germany, after both failed to make payments in roubles.

GasTerra, which buys and trades gas on behalf of the Dutch government, said it had contracted elsewhere for the 2 billion cubic metres (bcm) of gas it had expected to receive from Gazprom through October.

‘This is not yet seen as a threat to supplies,’ said Economy Affairs Ministry spokesperson Pieter ten Bruggencate.

Following the announcements, the benchmark front-month gas contract rising around 5 percent on Tuesday afternoon to around 91.05 euros/MWh but remained well below highs over 300 euros/MWh hit in early March.

‘While the market was largely expecting both companies to be cut off, this development will make the supply-demand balance that much tighter,’ ICIS analyst Tom Marzec-Manser said on Twitter.

Russian gas flows to Germany via the Nord Stream pipeline fell on Tuesday which analysts said was likely due to the Nederlands being cut off.

Moscow had already stopped natural gas supplies to Bulgaria, Poland and Finland citing their refusal to pay in Russian roubles, a demand made in response to Western sanctions that have isolated Russia.

German, Italian and French companies, however, have said they would engage with the scheme to maintain supplies.

The supply cuts have boosted already high gas prices, turbocharging inflation and spurring European governments and companies to chase alternative sources and the infrastructure to handle them, including floating storage and regasification units (FSRUs).

Europe has been rushing to fill its gas storage sites ahead of winter, wary of Russian supply cuts, which typically provides around 40% of Europe’s gas. Dutch gas storage is now around 37% full, data from Gas Infrastructure Europe showed.

The Dutch government last week said it would increase subsidies to 406 million euros to encourage companies to fill the Bergermeer facility, one of the largest open-access gas storage facilities in Europe.

Danish gas storages are currently 55% full and will be able to supply all Danish and Swedish gas customers for five months if supplies from Germany get cut off, a letter from the Danish energy minister Dan Jorgensen to parliament showed.

Gazprom has cut off supplies to five European countries in response to a litany of international sanctions on Moscow after President Vladimir Putin ordered the invasion of Ukraine on Feb. 24 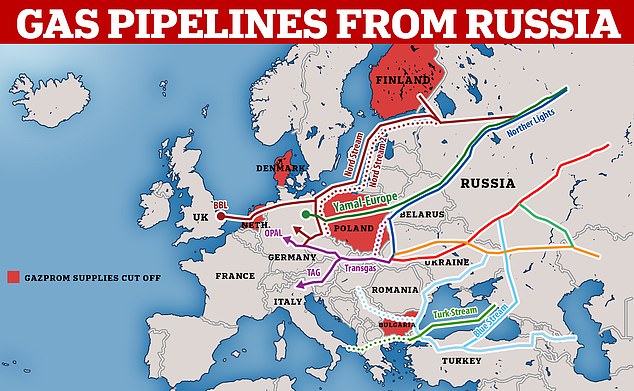 Pictured: A map showing gas pipe lines across Europe, and the five countries that have so-far seen Russian gas supplies cut off in retaliation to Western sanctions on Moscow (Finland, Poland, Bulgaria, Denmark and The Netherlands)

Meanwhile, in the most significant effort yet to punish Russia for its invasion the EU agreed to ban the overwhelming majority of Russian oil imports after tense negotiations that tested how far the bloc is willing to go to ostracize Moscow.

From the moment Russia invaded, the West has sought to make Moscow pay economically for its war.

But targeting its lucrative energy sector was seen as a last resort in Europe and has proved hardest, since the bloc relies on Russia for 25% of its oil and 40% of its natural gas. European countries that are even more heavily dependent on Russia have been especially reluctant to act.

In a move unthinkable just months ago, EU leaders agreed late Monday to cut around 90% of all Russian oil imports over the next six months.

That figure includes a ban on all Russian oil delivered by sea – which accounts for two-thirds of the EU’s imports from Russia – plus a decision by Germany and Poland to stop using oil from the northern branch of the Soviet-era Druzhba pipeline.

The embargo covers crude oil and petroleum products but has an exception for oil delivered by pipeline. That exception was demanded by Hungarian Prime minister Viktor Orban. Hungary gets more than 60% of its oil from Russia, much of it through the Druzhba pipeline.

The compromise laid bare the increasing difficulty of reaching consensus among EU leaders when important national interests are in play.

Agreeing on another round of measures is likely to prove much tougher: Next on the agenda is whether to target natural gas, which is much harder to cut off. That’s because it represents a larger percentage of Europe’s energy mix. 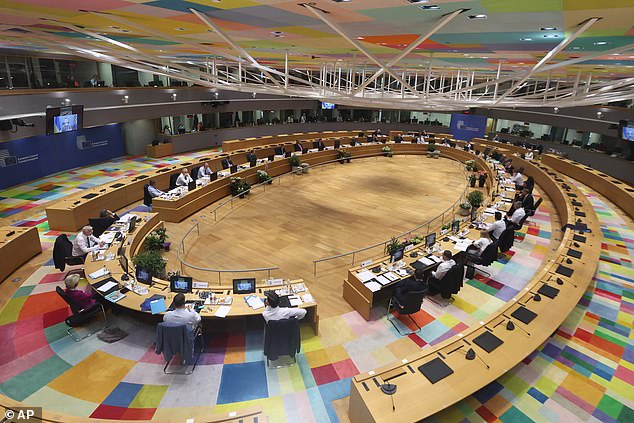 Pictured: Ukrainian President Volodymyr Zelensky is seen on a screen, left, as addresses from Kyiv during an extraordinary meeting of EU leaders to discuss Ukraine, energy and food security at the Europa building in Brussels, Monday, May 30, 2022

‘The sanctions have one clear aim: to prompt Russia to end this war and withdraw its troops and to agree with Ukraine on a sensible and fair peace,’ German Chancellor Olaf Scholz said.

Ukraine estimated the ban could cost Russia tens of billions of dollars.

‘The oil embargo will speed up the countdown to the collapse of the Russian economy and war machine,’ Foreign Minister Dmytro Kuleba said.

The deputy head of Russia’s Security Council said that energy sanctions against the country are intended to hurt ordinary Russians by making it harder for Moscow to fund social programs.

‘They hate us all! The basis for these decisions is hatred for Russia, for Russians and for all its inhabitants,’ Dmitry Medvedev, who is also a former president and prime minister, wrote on the Telegram messaging app.

Mikhail Ulyanov, Russia’s permanent representative to international organizations in Vienna, appeared to shrug the move off, though, saying Moscow will find other buyers.

Still, analyst Simone Tagliapietra said Russia will probably have to sell its oil at a substantial discount. Tagliapietra, an energy expert and research fellow at the Brussels-based think tank Bruegel, called the embargo ‘a major blow.’

Matteo Villa, an analyst at the ISPI think tank in Milan, agreed that Russia will take a pretty significant hit now but cautioned that the move could eventually backfire.

‘The risk is that the price of oil in general goes up because of the European sanctions. And if the price goes up a lot, the risk is that Russia starts to earn more, and Europe loses the bet,’ he said.

Ukrainian President Volodymyr Zelensky has said Russia has prevented the export of 22 million tons of Ukrainian grain, much of it meant for people across the Middle East and Africa. He accused Moscow of ‘deliberately creating this problem.’