Moscow: Ukraine has taken a major step towards establishing its own, autonomous Orthodox Church, setting the stage for increased tensions with Russia by altering a centuries-old religious tradition under which the Kiev church answered to Moscow.

Some 190 bishops, priests and other church figures spent the day closeted in St Sophia's Cathedral in downtown Kiev to elect the newly unified Ukrainian church's head, Metropolitan Epiphanius. He is scheduled to travel in January to Istanbul, the historical seat of the Eastern Orthodox Church, to receive an official order granting autonomy. 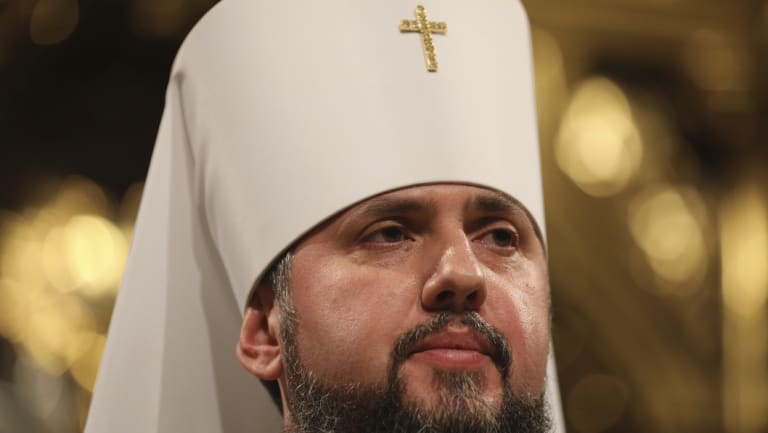 Hundreds of supporters of the move cheered and some wept as President Petro Poroshenko, who had attended the session, emerged from the cathedral to announce that Ukraine had a new church leader.

Quoting from the national poet, Taras Shevchenko, Poroshenko said that "Ukraine will no longer drink Moscow poison from the Moscow cup", and he called on supporters to remember the day's events as "the final acquisition of independence from Russia".

Many of the faithful have long been hesitant about breaking the church's historical ties with Moscow. But Russia's fostering of a violent separatist movement in eastern Ukraine since 2014 and its seizure of Crimea the same year invigorated the move for a church independent of the Russian Orthodox Church.

Opponents of the Russian church in Ukraine said some priests had refused to perform last rites for soldiers killed in the fighting in eastern Ukraine, and some had even criticised the dead, accusing them of participating in a fratricidal war. 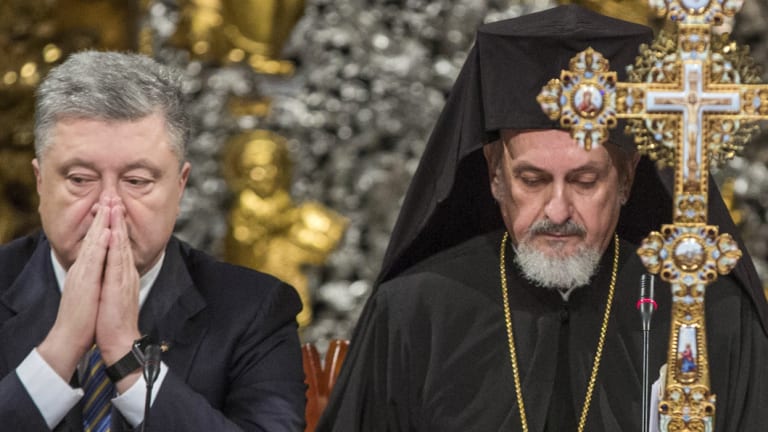 The step toward independence is sure to antagonise both Russian President Vladimir Putin and Patriarch Kirill, head of the Russian Orthodox Church, who have pursueda "Russian World" alliance of states bound to Moscow by tradition, culture and religion.

Russia has criticised the move toward autonomy for months, calling it a campaign ploy by Poroshenko, who faces a difficult re-election in March. That impression was fed by Poroshenko's speech, which was devoted to the break with Russia.

"Not a word about Christ, just 'Farewell, unwashed Russia' and so forth," wrote Sergei Chapnin, a Russian religious scholar and frequent critic of the Moscow church hierarchy, on Facebook. 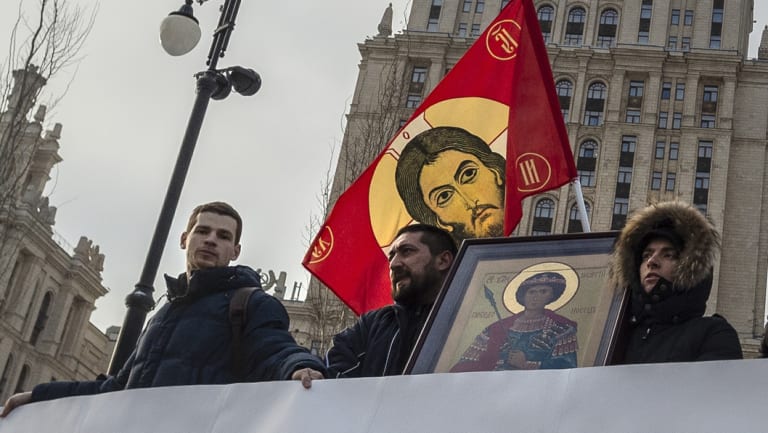 Russian Orthodox Church activists stand in front of the Ukraine hotel in Moscow in a picket to protest the church meeting in Kiev.Credit:AP

Saturday's vote came amid already heightened tension between the two countries, after Russia seized three Ukrainian naval vessels and 24 sailors and security officers who were navigating through the Kerch Strait between Russia and disputed Crimea in late November.

Ukraine has imposed martial law on 10 provinces that face areas with Russian military presence, and both sides have accused the other of mustering forces for an attack.

One new source of tension will be the division of valuable church property in Ukraine, including a historic monastery in the centre of Kiev.

The church in Ukraine has been notoriously fractious, with three separate Orthodox branches emerging after the country's 1991 political independence from Russia. Only one is loyal to Moscow.

Few of the 89 bishops loyal to Moscow attended Saturday's session because the Russian church had threatened to ostracise those who participated, leaving unclear the true extent of clerical support for an autonomous church.

The issue has also created a split between Moscow and the Orthodox mother church, the Constantinople Patriarchate. The Russian church moved in October to sever ties with the mother church, accusing it of violating canonical law by not seeking its permission before allowing the Ukrainians to pursue independence. 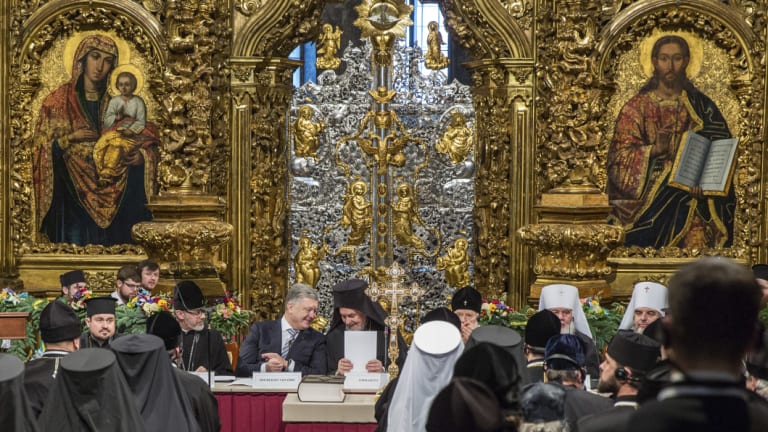 Russia has characterised the change as the biggest schism since the Eastern and Western churches divided in 1054.Credit:AP

Both the Russian and Ukrainian churches would forfeit a lot.

The Russian Orthodox Church, which puts its membership at 150 million, will lose up to 30 to 40 per cent of its most ardent followers; around 16 per cent of Ukrainians attend church regularly, compared with half that in Russia. Perhaps more important, a smaller church could undermine Moscow's long-standing effort to portray itself as the protector of all 300 million Orthodox Christians worldwide.

Russia has characterised the change as the biggest schism since the Eastern and Western churches divided in 1054. The two sides have argued over the degree of supervision the mother church originally granted to the Moscow Patriarchate in 1686.

But the ecumenical patriarch, Bartholomew, considered first among equals in the church hierarchy, also has much at stake. The Russian Orthodox Church has the wealth and political backing needed to assert itself globally.

There was no immediate reaction from the Russian government or the church. Critics of the Kremlin said it had brought the problem on itself by allowing the bloodshed in eastern Ukraine to drag on.

"That which was created over hundreds of years was destroyed by Putin and his idiots in four years," Alexei Navalny, Russia's most prominent opposition figure, wrote on Twitter. "Putin is the enemy of the Russian World."

One condition for receiving autonomy was the election of the new leader of a unified Ukrainian church.

"Today is a truly historic event," Epiphanius told the crowd, saying the church would welcome all believers. "We were able to overcome various temptations, disagreements and unite in one church."

At 39, Epiphanius is relatively young, and his close relations with Filaret — the metropolitan, or church leader, who has long led the fight to separate from Russia — have prompted some analysts to suggest that Filaret would retain power in Kiev. Others called Epiphanius a compromise choice likely to forestall bickering among the church elders.

The decision on Saturday is just one step in a process that may be drawn out over years, if not decades, to create a single, national Orthodox church in Ukraine.

Epiphanius holds a doctorate in theology and has studied philosophy in Athens. Greece, and Mount Athos in particular, remains the heartland of the Orthodox church. His knowledge of Greece could help him woo the other 14 autonomous churches across the world in winning their recognition of an independent church in Ukraine.

Vladimir V. Fesenko, a political scientist who heads the Penta centre in Kiev, said that considering the nose-dive that Ukrainian-Russian relations took with the outbreak of fighting in 2014, it is hard to imagine them getting much worse.

"An independent church was created today, but it is only the start of a long process of unification," he said.