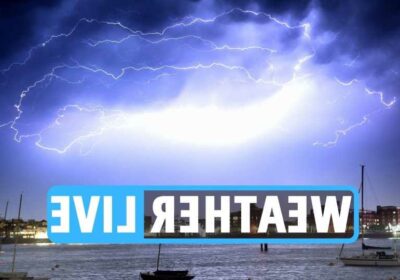 BRITAIN roasted in scorching temperatures this weekend – but the glorious weather won't last long with STORMS set to hit next week.

Brits enjoyed deliciously warm climes over the last few days, with highs of 24C recorded in London and the south-east this weekend.

But the early summer conditions might take a turn as rain is forecast to hit Sunday night.

The Met Office predicts downpours will hit around 3am on Monday morning and that much of Britain will experience rainy weather by the middle of next week.

And the miserable spells will be interrupted by bouts of thunder as wind speeds increase.

A Met Office spokesman said: "Unsettled with showers or longer spells of rain for most, some heavy with a risk of thunder.

"Windy on Wednesday and Thursday with further rain or showers. Temperatures near average."

Read our weather blog for the latest news and updates…