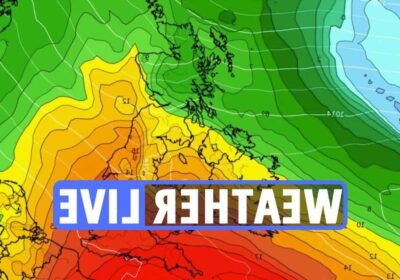 TEMPERATURES will reach a scorching 34C by the end of the week, as the Met Office issues a level 2 heat-health warning across much of the south.

Friday is likely to be the hottest day of the year, seeing Brits pack the nation’s beaches and parks to enjoy the sun.

In response to this BAKING weather, the Met Office has issued a level 2 heat-health warning.

Speaking on the heatwave, Met Office Deputy Chief Meteorologist, Dan Rudman, said: “Temperatures will continue to rise as we go through the week, becoming well above-average by Friday when many parts of the southern half of the UK are likely to exceed 30C and may even reach 34C in some places.

“This is the first spell of hot weather this year and it is unusual for temperature to exceed these values in June. Many areas will also see some warm nights with minimum temperatures expected to be in the high teens or even low 20Cs for some overnight.

“The heat is a result of a mix of home-grown warming in the day due to high pressure, as well as a southerly airflow introducing some of the warm air from the continent to UK shores.”

The weather is likely to cool as we enter next week, with cooler air moving in from the north.

Remember to stay hydrated during this scorching temperatures, and the shade is your friend.