Police are investigating after two people were killed in a crash near Clyde, an outer south-eastern suburb of Melbourne near Cranbourne, on Friday afternoon.

Officers believe a car was performing a u-turn on the South Gippsland Highway at Devon Meadows when it collided with a vehicle travelling southbound at about 1.25pm. 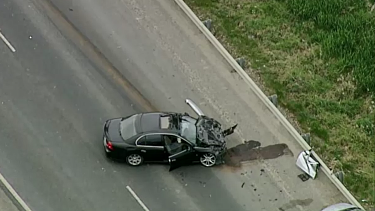 A car at the scene of the crash on the South Gippsland Highway on Friday. Credit:Nine News

Both occupants of the first vehicle, who are yet to be formally identified, died at the scene.

The driver of the second vehicle was not injured in the crash. Police said the driver was assisting them with their inquires.

Ambulance Victoria said that person was assessed at the scene, but did not require treatment or transport to hospital.

A section of the South Gippsland Highway was expected to be closed for some time on Friday while detectives from the Major Collision Investigation Unit examined the scene.

Anyone who witnessed the crash, has dash cam footage of it or any information about the incident is urged to contact Crime Stoppers on 1800 333 000, or submit a report online via their website.