Home » World News » Two men, aged 49 and 51, arrested after dad was shot dead waiting to pick up his son, 13, from Belfast school

Two men, aged 49 and 51, arrested after dad was shot dead waiting to pick up his son, 13, from Belfast school Disturbing CCTV footage shows a gunman sprinting from the scene after shooting Jim Donegan, aged in his forties,  dead as he sat in his £80,000 Porsche. 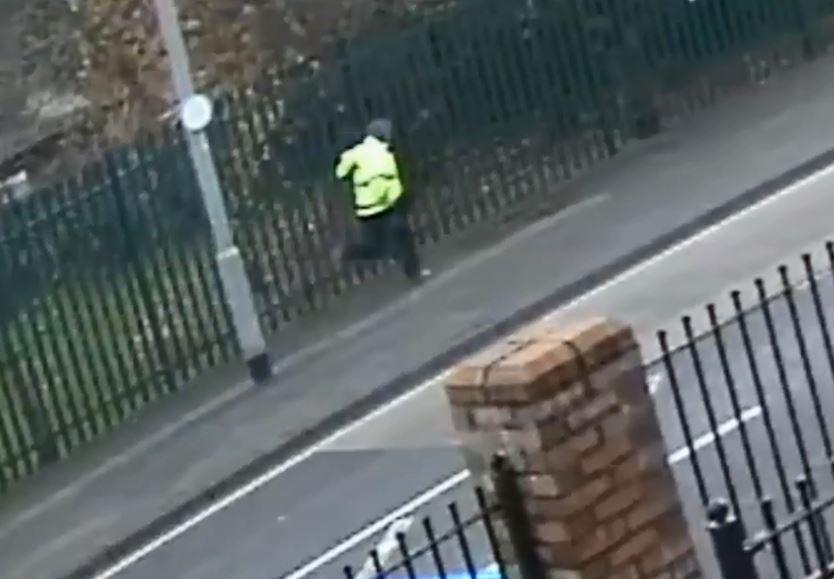 The shooter, who was wearing a hi-vis jacket, killed Jim Donegan by spraying eight bullets towards the dad at the school gates as terrified pupils looked on.

Cops said the killer walked past children pouring out of their school gates and then opened fire on Mr Donegan, who was waiting for his 13-year-old son.

Police in Northern Ireland said two men were detained on Wednesday after searches in the west Belfast area and they remain in custody.

Emergency services rushed to the scene on the Glen Road in West Belfast after the horror incident at around 3.15pm on Tuesday. 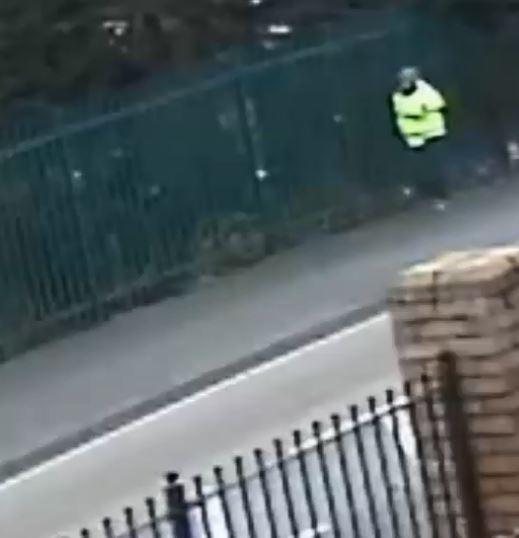 Police believe that that the gun was hidden inside the man's bag, who is thought to be in his 40s, wearing a high vis vest with the words 'Security' on the back.

Detective Chief Inspector Peter Montgomery said: "It is utter madness as any one of these bullets could have ricocheted and having been at the scene I cannot emphasise enough that it is sheer luck I am not investigating multiple fatalities.

"Jim  was a husband, a brother, a father to 2 sons and a stepfather.

"Yesterday, as the school bell was ringing, a lone gunman shot Jim, as he sat in his car waiting to pick up his 13 year old son."

"I believe the gun was in this bag. 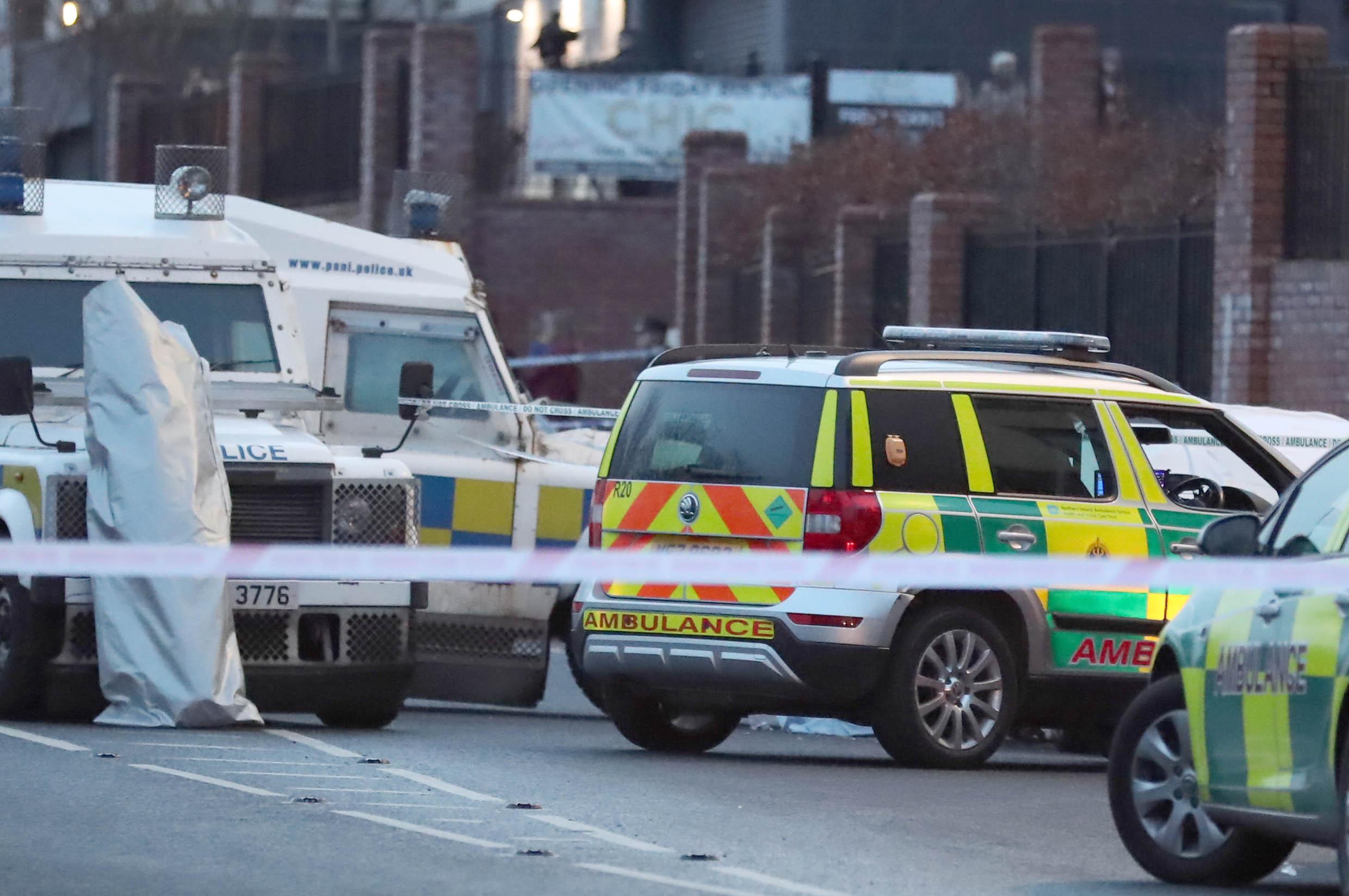 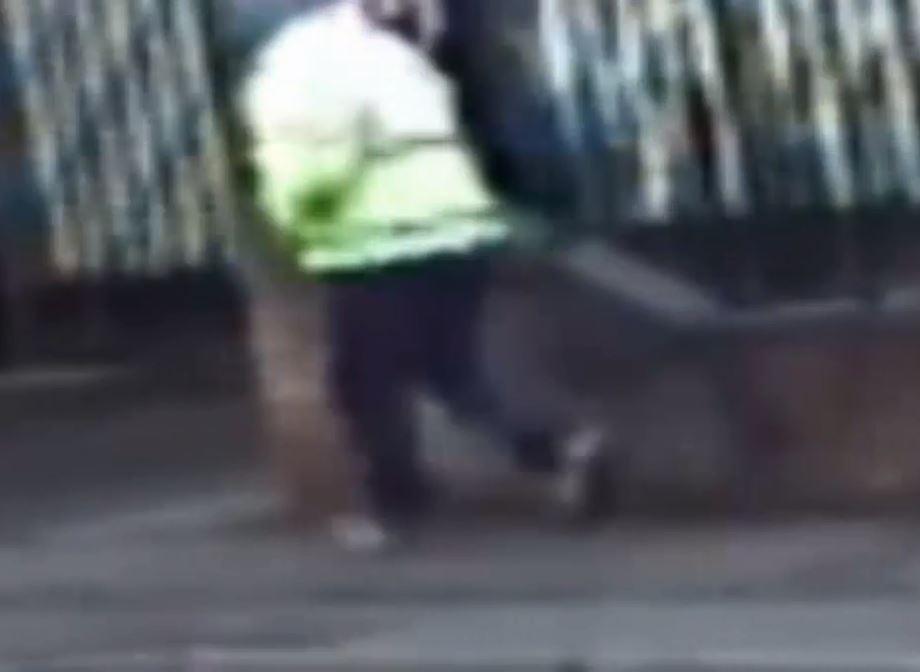 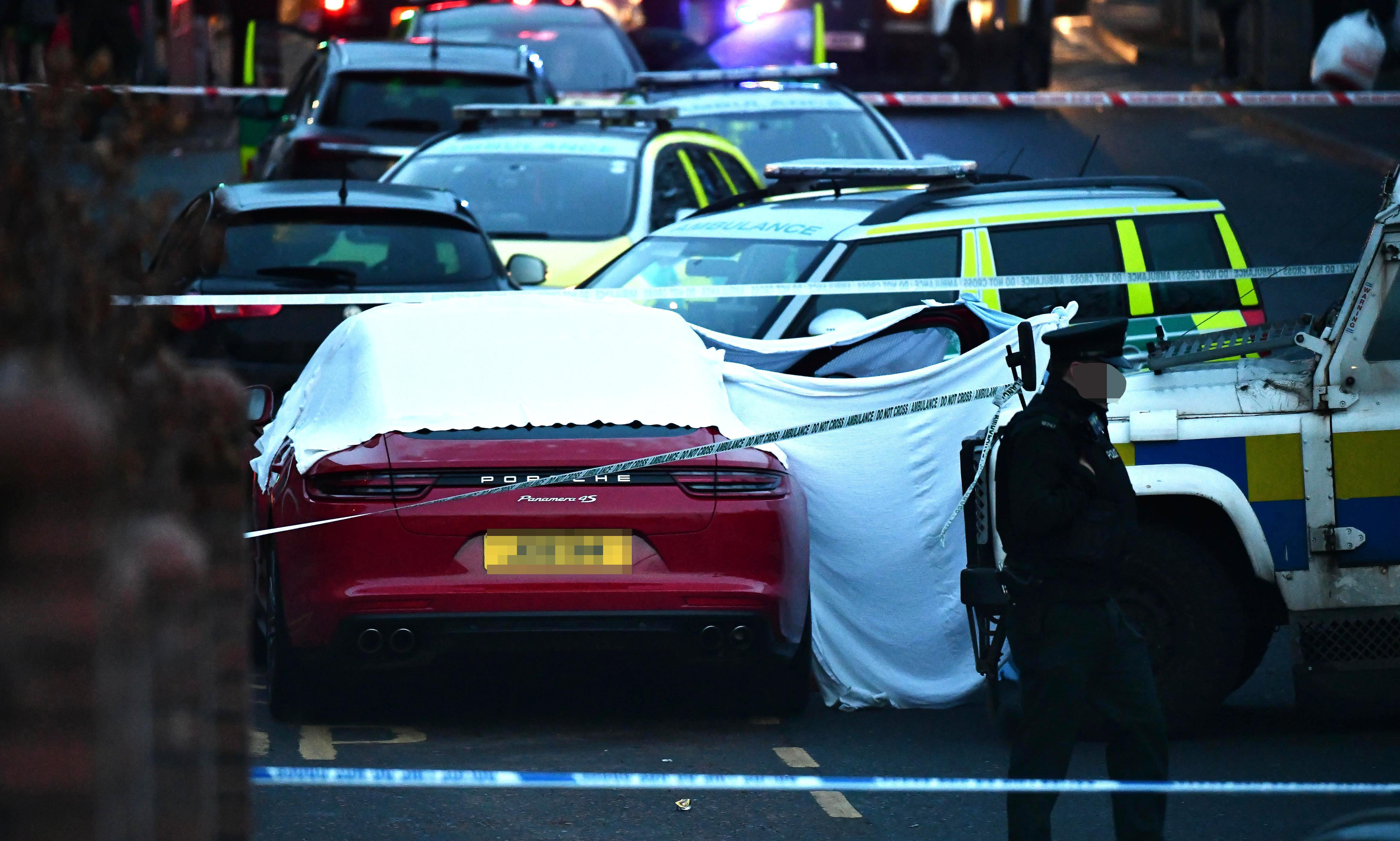 "He emerged from a lane in Clonelly Avenue onto the Glen Road around 3.10pm, walked past countless parents and children, before firing 8 bullets at Jim while he sat outside the school in his red Porsche Panamera, registration JDZ34.

"Around 2 minutes later, after the murder, he ran back up Glen Road and along the lane into Clonelly Avenue.

"I would like to hear from anyone who saw the gunman during these times. 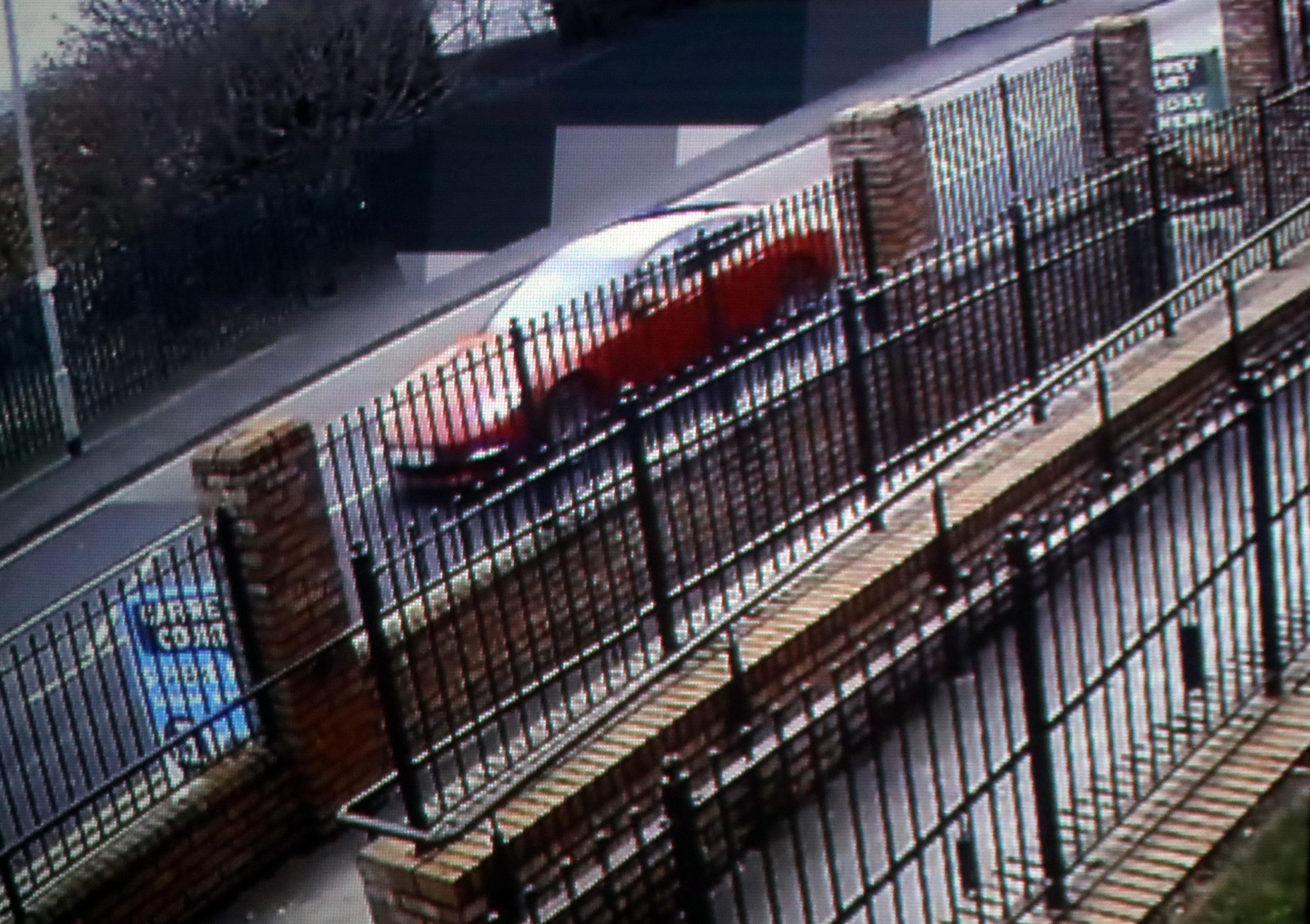 "I am appealing to the community’s to help identify who murdered Jim and put the lives of countless children at risk.

West Belfast MP Paul Maskey said: "It is deeply concerning that this killing was carried out in full view of hundreds of kids who were leaving school at the time."

Before the attack he was seen calmly walking towards the school in the dark trousers and bright yellow jacket.

According to local SDLP Councillor Tim Attwood, a "number of pupils" witnessed the "reckless act."

Cllr Attwood added that shock has swept the community as the "victim was killed instantly." 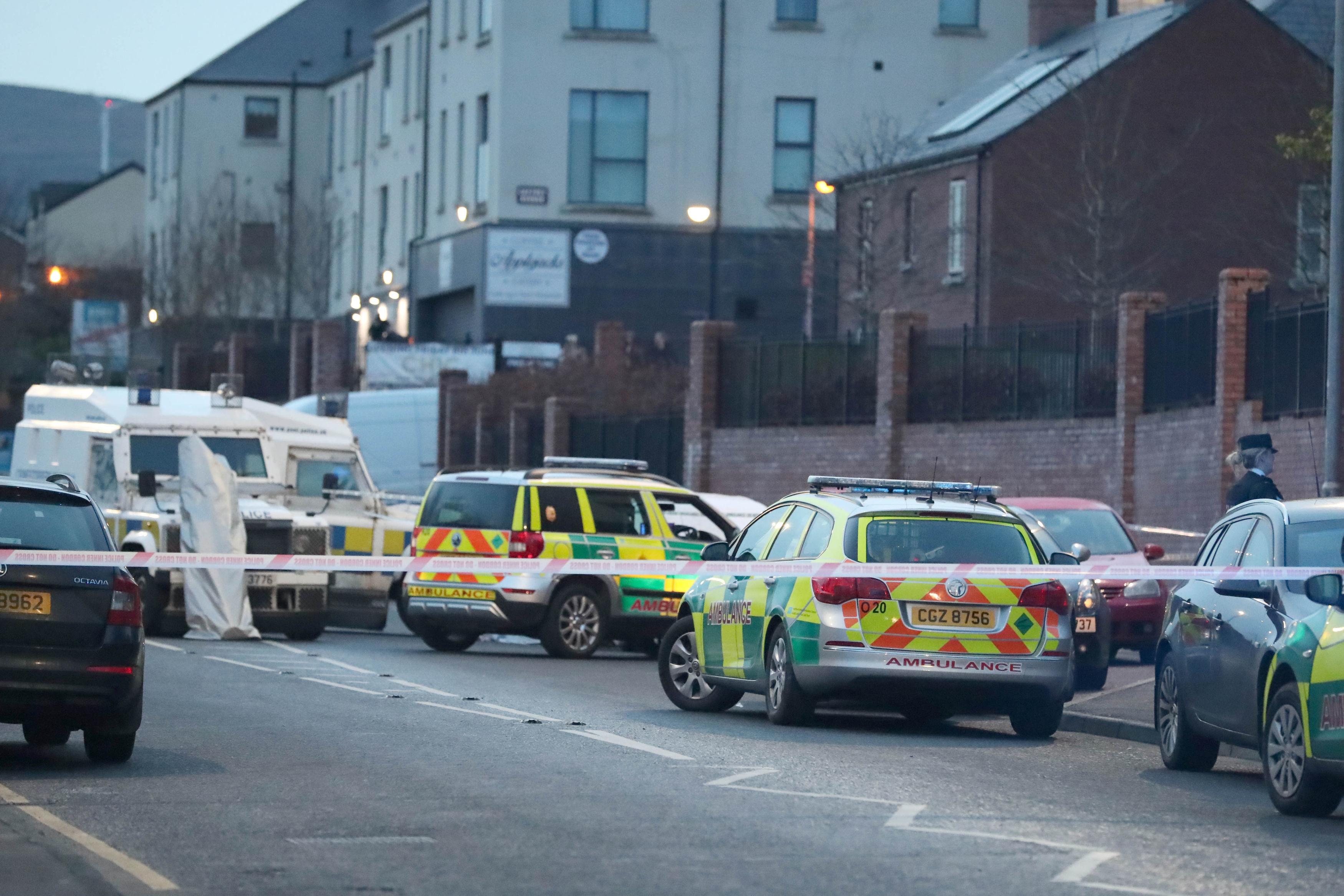 Speaking from the scene he said: “It is absolutely sickening that a gun was fired in the vicinity of both a primary and secondary school in West Belfast today.

“A number of pupils witnessed this fatality and are understandably very disturbed and frightened after this reckless act occurred nearby the school gates.

“There is absolutely no place for this in 2018. This madness belongs in the past and we cannot allow it to once again become our normality.

“I cannot stress enough that any information relating to this incident must be passed to the PSNI immediately.” 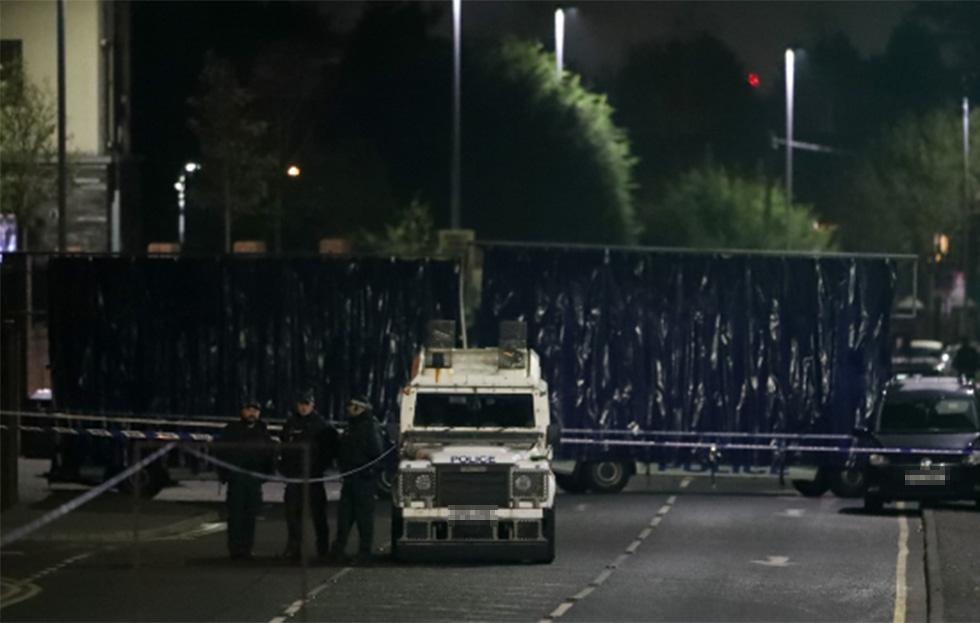 A mother of a seven-year-old told Q Radio News that she fled with her son after seeing the gunman.

"I heard about six or seven gunshots and then I heard someone screaming, my son saw it, he was able to tell me he saw a man up ahead with a hi-vis vest on, and his hood up and carrying a bag," she said.

"He was still standing there at the time so I just turned with him (her son) and ran up the street.

"It was very scary, more so for him (her son), he is still freaking out about if he is still going to be there tomorrow, he has been asking me, will they all be away when he is going to school?"

She added: "It's not a place to do anything like that, it's not right any time, but right outside three/four schools on that road. It's just disgraceful."

Mr Donegan's 13-year-old son is a pupil at St Mary's Grammar School, near where the attack happened.

Interim principal Fiona Crookes said the boy and his mother Laura were brought back to the school after the shooting.

More than 1,000 pupils were exiting the school at the time of the attack and teachers shielded the car in which Mr Donegan sat from the view of children.

The school is expected to reopen for classes on Thursday. 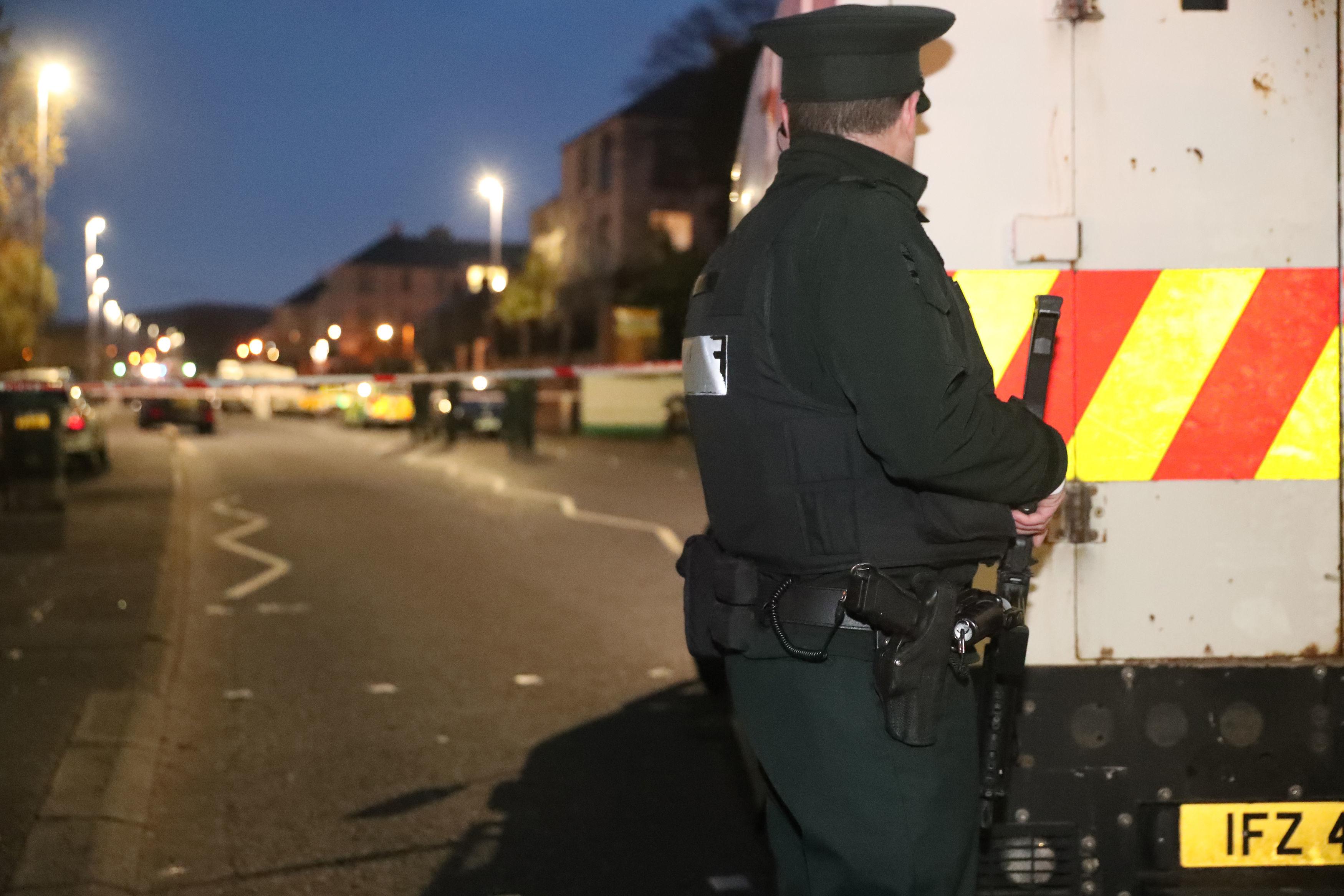 Some children needed help from youth workers to up the road.

He said: “This is a disgraceful and horrific attack. A man has been shot dead while picking up a child from a local school in the Glen Road area.

“It is deeply concerning that this killing was carried out in full view of hundreds of kids who were leaving school at the time.

“I unreservedly condemn this murder and my thoughts at this time are with the family and friends of the victim.

"Anyone with any information on the killing of this young man should bring it forward to the police.” 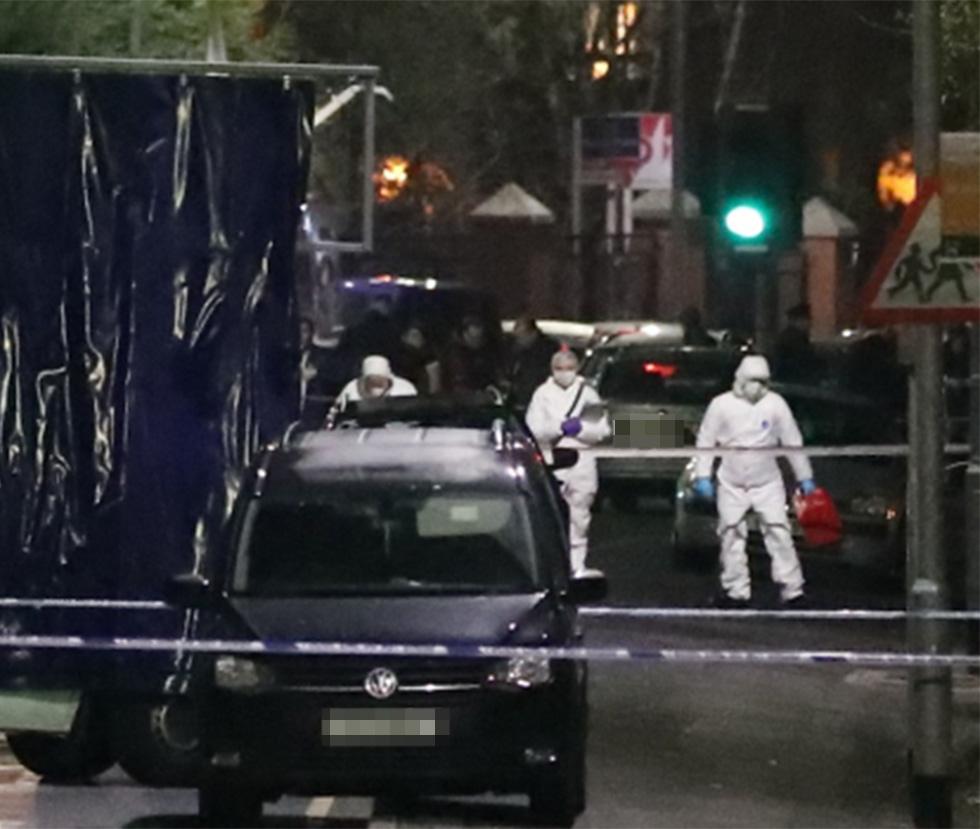 Traffic has also been diverted.

A PSNI spokesman said this afternoon: "Police are dealing with an ongoing incident on the Glen Road, Belfast which will be causing significant disruption to traffic at school finishing time.

"Could we ask that parents collect their children from either the Caffrey development or the Kennedy Way end of the Glen Road."

An ambulance service spokesman added: "The Northern Ireland Ambulance Service received a 999 call at 15:14 on Tuesday 04 December 2018 following reports of an incident in the Glen Road area of Belfast.

"Two Paramedic Officers and one Rapid Response Paramedic were dispatched to the incident. 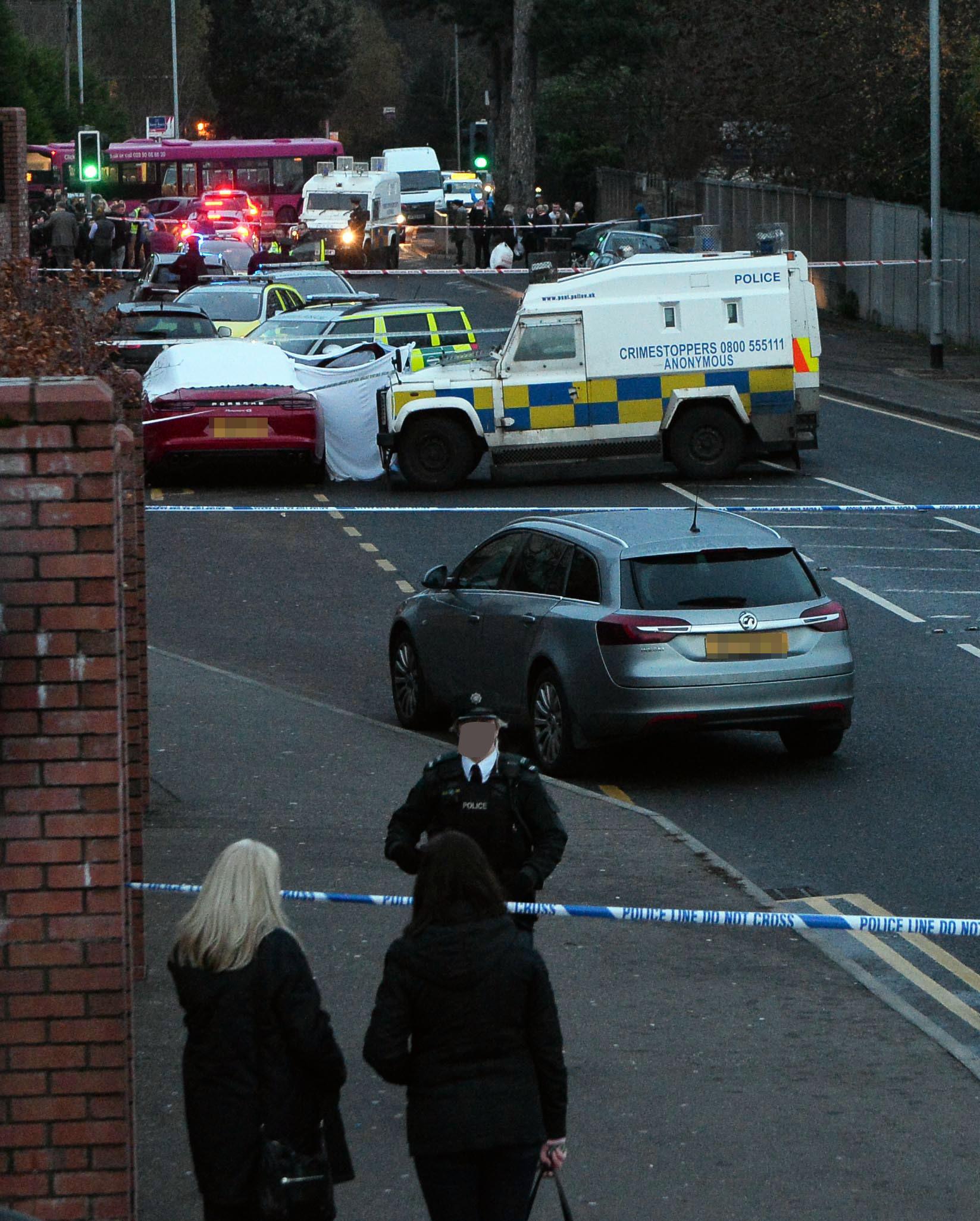 "No one was transported from the scene."

Anyone with information is urged to contact detectives there on 101 quoting reference 741 04/12/18.

Alternatively information can also be provided to the independent charity Crimestoppers on 0800 555 111, which is 100% anonymous and gives people the power to speak up and stop crime."