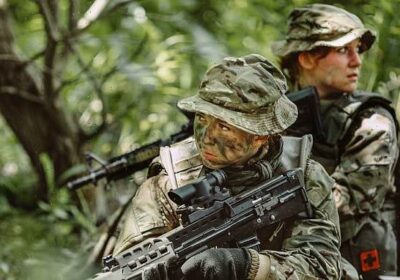 Two women have made history after becoming the first to be selected for the gruelling SAS full selection course.

They will also be tested on their ability to evade capture and resist interrogation, testing their resolve in case they are ever caught behind enemy lines.

The pair are said to have excelled in their pre-selection tests.

It comes after combat roles were only made available to women in 2018.

An SAS source told the Sun: ‘No women have got this far before.’

It will not be the first time women have served with the SAS (Special Air Service), which was founded in 1941, with many taking on roles in surveillance and elsewhere. 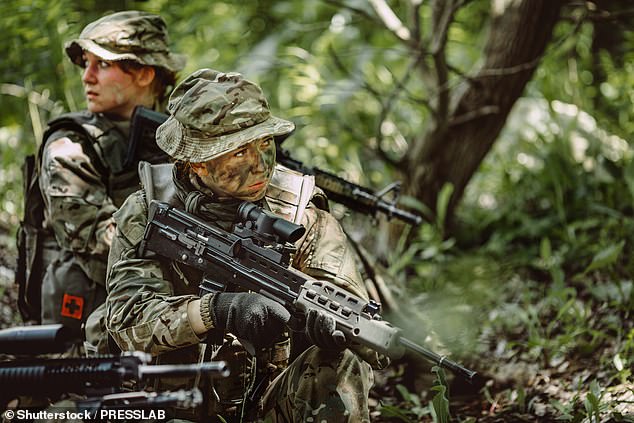 The two female soldiers (not pictured) will be tested on their ability to evade capture and resist interrogation, testing their resolve in case they are ever caught behind enemy lines (Pictured: File photo of British female soldiers in military maneuver)

Some have even worn the regiment’s badge — a winged dagger emblazoned with the motto: ‘Who Dares Wins’.

But none have ever been accepted onto the full selection course, a tough three-stage process which sees an average of around 125 candidates whittled down to around 10.

The two women are the first to come through Project Artemis, a programme dedicated to bringing women into both the SAS and SBS (Special Boat Service).

Female candidates, with at least two years’ service, take part in a nine-month mentoring programme to prepare them for selection.

The MoD said: ‘We are proud there are no bars to women playing a full role across our Armed Forces.’

To pass the full selection process an applicant must endure three stages of testing.

The first is an endurance test or ‘hills stage’ in Brecon Beacons, Wales –  where candidates have to carry an ever-increasingly-heavy bergen over a series of long timed hikes, navigating between checkpoints.

No encouragement or criticism is provided by the supervising staff at the checkpoints.

Successful candidates then pass into the jungle warfare stage, typically set in the Belize jungle, where they have to live for weeks behind enemy lines, in four-man patrols, living on rations.

The few who pass the second stage are then put onto the final three-day escape and evasion phase – where among other tasks they will be interrogated as harshly as legally possible to test their resolve. 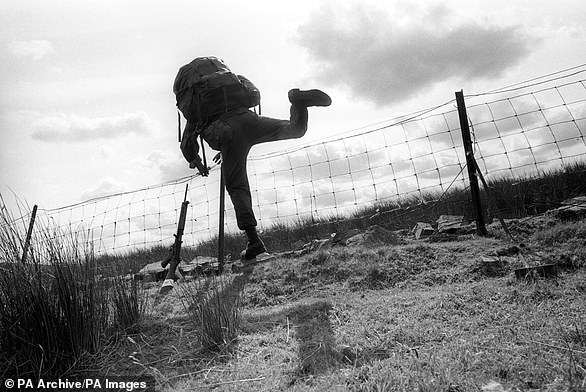 Many try to get into the Special Air Service regiment. Most of them fail. Out of an average intake of 125 candidates, the grueling selection process is broken up into three stages and will weed out all but 10.

To pass this phase, a high level of determination and self-reliance is vital. The hills stage lasts three weeks and takes place in the Brecon Beacons and Black Hills of South Wales.

Candidates have to carry an ever-increasingly-heavy bergen over a series of long timed hikes, navigating between checkpoints. No encouragement or criticism is provided by the supervising staff at the checkpoints. 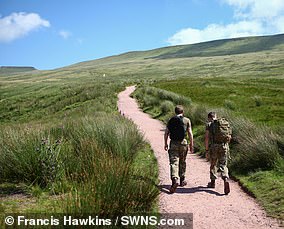 Soldiers with rifles train on the Brecon Beacons in Wales

SAS Directing Staff (DS) are fully-badged members of the regiment and leave each candidate to their own devices. This can be a marked contrast from the selectee’s experience in their parent units. They would be used to their instructors shouting constant instructions at them, along with encouragement and abuse.

The demands of life in a special forces unit require each member to be self-motivated. The endurance phase culminates with ‘the long drag’, a 40-mile trek carrying a 55lb bergen, that must be completed in under 24 hours.

Those who have passed stage 1 have to then pass jungle training. Training takes place in Belize, in the heart of deep jungles. Candidates learn the basics of surviving and patrolling in the harsh conditions.

SAS jungle patrols have to live for weeks behind enemy lines, in four-man patrols, living on rations. Jungle training weeds out those who can’t handle the discipline required to keep themselves and their kit in good condition whilst on long range patrol in difficult conditions.

Again, there is a mental component being tested, not just a physical. Special Forces teams need men who can work under relentless pressure, in horrendous environments for weeks on end, without a lifeline back to home base.

The small number of candidates who have made it through endurance and jungle training now enter the final phase of selection. The likelihood of a special operation going wrong behind enemy lines is quite high, given the risks involved.

The SAS want soldiers who have the wherewithal and spirit required to escape and evade capture and resist interrogation. For the escape and evasion (E&E) portion of the course, the candidates are given brief instructions on appropriate techniques.

This may include talks from former POWs or special forces soldiers who have been in E&E situations in the real world. Next, the candidates are let loose in the countryside, wearing World War 2 vintage coats with instructions to make their way to a series of waypoints without being captured by the hunter force of other soldiers.

This portion lasts for 3 days after which, captured or not, all candidates report for TQ. Tactical Questioning (TQ) tests the prospective SAS men’s – and now women’s – ability to resist interrogation.

They are treated roughly by their interrogators, often made to stand in ‘stress positions’ for hours at a time, while disorientating white noise is blasted at them. When their turn for questioning comes, they must only answer with the so-called ‘big 4’ (name, rank, serial number and date of birth).

All other questions must be answered with ‘I’m sorry but I cannot answer that question.’ Failure to do so results in failing the course. The questioners will use all sorts of tricks to try and get a reaction from the candidates.

They may act friendly and try to get their subjects chatting; or they stand inches away from their subjects and scream unfavourable remarks about the sexual habits of their mothers. Female interrogators may laugh at the size of their male subject’s manhood.

Of course, a real interrogation would be a lot more harsh and the subject would not know that they get to leave alive when it’s all over. That said, days of interrogations and enduring the stress positions and white noise break down a man’s sense of time and reality.

The SAS are looking for men who can withstand such treatment long enough so that the effects of revealing any operational information they might have can be lessoned by HQ.

The small number of men (or women) who make it through selection receive the coveted beige beret with the distinctive winged dagger insignia. As a newly badged member of the Special Air Service they can feel justly proud. They are not out of the woods, however, as they are now effectively on probation. As brand new members of the regiment, they will be watched closely by the DS as they enter continuation training. Many SAS soldiers are RTU’d (returned to unit) during training.