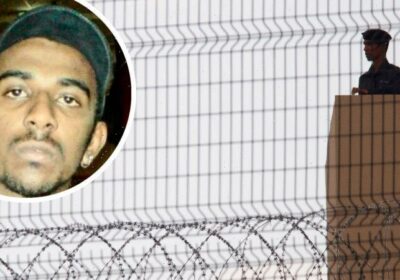 Singapore: A Malaysian man facing the death penalty in Singapore on Wednesday has won a momentary stay of execution after lawyers launched a last-minute bid to have him spared because of a limited intellectual capacity and mental illness.

However, their efforts to overturn his death sentence failed in court on Monday. 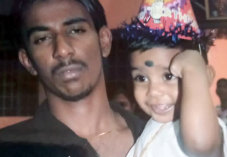 Nagaenthran Dharmalingam pictured with his nephew.

The pending execution of 33-year-old Nagaenthran Dharmalingam for smuggling 42.72g of heroin has garnered international attention in recent days as the date of his hanging has neared.

Malaysia’s Prime Minister, Ismail Sabri Yaakob, appealed to his Singaporean counterpart, Lee Hsien Loong, for leniency and the European Union delegation in the city state has joined rights groups in denouncing the sentence.

Human rights lawyers mounted an 11th-hour effort on Monday on Nagaenthran’s behalf in Singapore’s High Court, having tried unsuccessfully in several previous court attempts to have the penalty commuted to life in prison.

The hearing was closed to the public, but his legal team lodged a constitutional challenge, arguing Nagaenthran was mentally disabled and that by carrying out the sentence Singapore was breaching international standards. 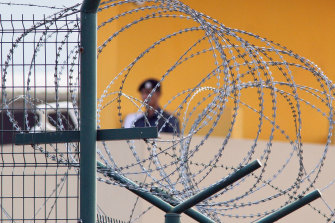 Changi Prison, where Nagaenthran Dharmalingam was due to be executed on Wednesday.Credit:Getty Images

In a draft affidavit seen by The Sydney Morning Herald and The Age, Nagaenthran’s brother, Navinkumar, also told of how he had witnessed a significant deterioration of his mental health.

He described Nagaenthran as “very disoriented” and said he took three-hour baths each day which, Navinkumar said, showed an “unsound mind”.

“Nagaenthran talks about coming home again and eating home-cooked food, as if he is not aware that he is going to be executed soon. Talking to him feels like talking to a child who doesn’t really comprehend much beyond the current moment,” his brother wrote in the affidavit.

“I do not believe Nagaenthran knows he is facing imminent execution. Nagaenthran seems to be in a different world altogether. This is not Nagaenthran, he is not himself at all.”

The constitutional challenge was rejected, but Nagaenthran’s lawyer M Ravi said a stay of execution had been granted until an appeal of Monday’s decision had been heard by Singapore’s Court of Appeal.

Nagaenthran had been due to this week become the first prisoner executed in Singapore since 2019.

Aside from Vietnam, no country in south-east Asia has gone ahead with an execution since then, according to Amnesty International, although a handful have still been handing out death sentences.

Singapore’s home affairs ministry has, however, defended plans to carry out the sentence of Nagaenthran, who at the age of 21 was caught with the drugs strapped to his thigh while crossing from Malaysia in 2009.

While he has been assessed with a very low IQ of 69, the ministry said the courts had, on the evidence of psychiatrists, determined that he was not intellectually disabled.

The ministry said Nagaenthran had been shown to have known what he was doing in trafficking the drugs, pointing to a previous court ruling that found his conduct demonstrated “the working of a criminal mind”.

“He was also noted to be ‘continuously altering his account of his education qualifications, ostensibly to reflect lower educational qualifications each time he was interviewed’,” the ministry said.

It added that the amount of heroin was well beyond the 15 gram threshold for a mandatory death sentence, stating “it could feed the addiction of about 510 abusers for a week”.

“Singapore adopts a zero-tolerance stance against illicit drugs. The penalties, including the death penalty, for the illegal trafficking, importation or exportation of drugs are made clear at our borders, to warn traffickers and syndicates of the harsh penalties they potentially face,” the ministry said.

“The approach Singapore has taken has resulted in it being one of the safest places in the world to live, relatively free of serious crime, and without the scourge of drug-related crimes and homicides – which take thousands of lives, and destroys countless young people and families, in some countries.”

A new appeal date had not been set but Simone Abel, chief executive of the Capital Punishment Justice Project, said it needed to properly examine Nagaenthran’s competency to be executed.

“It is imperative that Nagaenthran is given an urgent and independent psychiatric assessment, in light not only of his brother’s observations of his potential psychosis, but also because of the evidence of significant deterioration in his neurocognitive function between 2013 and 2017, and, no doubt, since that point onwards,” she said.

“Nagaenthran has a history of head injury, which does not appear to have been assessed, and he is deeply mentally unwell.”

She said there were multiple international treaties that gave protection against execution to prisoners with severe mental impairments or mental health issues.