Home » World News » Turtle recall: Beaumaris fossil changes ‘our understanding of the history of life on this continent’

Turtle recall: Beaumaris fossil changes ‘our understanding of the history of life on this continent’

It sat unidentified in the Melbourne Museum for almost 100 years, but the recent classification of a five-million-year-old specimen may shed new light on the evolution of tropical turtles in Australia.

The pig-nosed turtle fossil, discovered in the 1920s at a site in Beaumaris, in Melbourne’s bayside, puts the turtle thousands of kilometres outside its typical ecosystem. 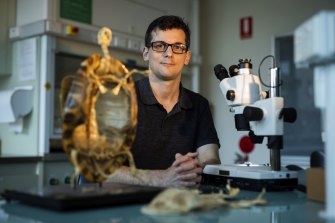 Dr James Rule with a 3D print of a pig-nosed turtle fossil.Credit:Paul Jeffers

The creatures can be found these days only in the Northern Territory and New Guinea, but pig-nosed turtle fossils were previously found in Asia and Europe.

“It’s a very unexpected find, both in time and space,” Dr Rule said.

“This one fossil specimen reveals a previously unknown evolutionary history of tropical turtles in Australia, and suggests we still have much to learn about the endangered pig-nosed turtle.

The fossil was found almost 100 years ago, and was put into the museum collection. Closer inspection in recent years identified it as the fossil of a pig-nosed turtle.

Dr Rule, who led the study, said the discovery placed the fossil at the wrong end of the continent.

“Researchers traditionally thought that the pig-nosed turtle only arrived in Australia a few thousand years ago … but the fossil was also 5 million years old, so clearly that story was completely thrown out the window. They’ve obviously been here for a lot longer than we thought.”

For two years, researchers examined the texture of the fossil’s bone surface, then used a microscope to see inside the bone, identifying structures only present in pig-nosed turtles.

The discovery is outlined in a study led by Monash University in collaboration with Museums Victoria and published on Wednesday in Papers In Palaeontology.

Dr Rule said the discovery was significant because pig-nosed turtles were the last living representative of a group of tropical freshwater turtles in the Northern Hemisphere known as carettochelyids.

Erich Fitzgerald, a senior curator of vertebrate palaeontology at Museums Victoria and co-author of the paper, said the discovery was of national significance.

“It’s in a way been a scientific national treasure waiting to be uncovered in the museum’s collection,” he said. 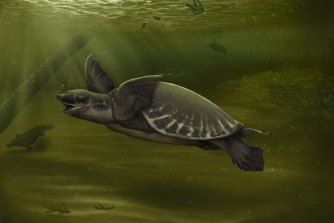 “It’s just one simple discovery that has literally changed our understanding of the history of life on this continent. Those discoveries are being made right here within the bayside suburbs of Melbourne.

“Having this fossil proves that this extraordinary mysterious group of pig-nosed turtles lived much further south than anyone realised until this find, and indeed lived down in the opposite end of Australia to where they live today.”

Dr Fitzgerald said the discovery also highlighted the national and global significance of the Beaumaris fossil site, where fossils can be found just by walking along the beach.

“The fossils at Beaumaris still have so much to teach us about our past, present and future,” Dr Fitzgerald said.

“We’ve still only just scratched the surface. Who knows what might come next.”