Turkish President Tayyip Erdogan announced the start of the action on Wednesday, local time, on Twitter, and said the aim was to eliminate what he called a "terror corridor" on Turkey's southern border. 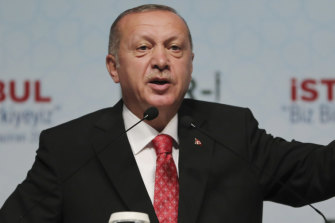 Recep Tayyip Erdogan announced the offensive had begun in a tweet.Credit:AP

Several large explosions rocked the town of Ras al Ain, on the border across from the Turkish town of Ceylanpinar, a CNN Turk reporter said.

The reporter said the sound of planes could be heard above and smoke could be seen rising from buildings in Ras al Ain.

A spokesman for Kurdish fighters in northern Syria said Turkish warplanes had started attacking the region.

Erdogan said the operation, named "Peace Spring," aimed to eradicate "the threat of terror" against Turkey.

"The Turkish Armed Forces, together with the Syrian National Army, just launched #OperationPeaceSpring against PKK/YPG and Daesh terrorists in northern Syria," Erdogan tweeted, referring to the Syrian-Kurdish force as well as the Islamic State.

"Our mission is to prevent the creation of a terror corridor across our southern border, and to bring peace to the area," he said.

The offensive has presented the Trump administration with a dilemma, because of the Syrian-Kurdish forces' alliance with the United States.

The White House announced on Sunday that it was withdrawing US troops from the area that Turkey planned to invade, igniting a firestorm of criticism. Republican leaders denounced Trump's abandonment of the Kurds. Pentagon officials struggled with explanations, humanitarian workers warned of civilian casualties, and Kurdish commanders said they might be forced to abandon their Syrian prisons holding thousands of captured Islamic State fighters and head for the front lines against Turkey.

Turkey views the Syrian-Kurdish fighters as terrorists allied with Turkey's Kurdistan Workers' Party, or PKK. A spokesman for Erdogan, Fahrettin Altun, writing in The Washington Post on Wednesday, called for international support for Turkey's offensive.

"Turkey has no ambition in north-eastern Syria except to neutralise a long-standing threat against Turkish citizens and to liberate the local population from the yoke of armed thugs," Altun wrote.

Officials said they were uncertain whether Turkish forces would conduct a symbolic feint inside the border – which they said could enable the US troops to return to reactivate the safe zone – or would force their way deeper into Syria.

Outside experts have cautioned that a large-scale Turkish operation, if it precipitated a security breakdown at prisons holding Islamic State militants, could prompt a larger US withdrawal from Syria. The American presence, which includes about 1,000 troops in north-eastern Syria, is a lean force dispersed across a number of bases.

Sabah, a Turkish newspaper close to Erdogan's government, published a report on Tuesday describing how the battle might unfold. It said Turkish armed forces would wait for the full withdrawal of US troops before commencing any operation. Warplanes and howitzers would pound enemy positions, then Turkish troops would enter Syria from several points along the border, east of the Euphrates River.

The military would advance as far as 30 kilometres into Syrian territory, the report said, without naming its source. After the operation was completed, Turkey would "continue its humanitarian work to bring back locals in the area."

On the other side of the Turkish border on Wednesday, many residents were steeling themselves for the worst. Mikael Mohammed, a Kurdish father of three who owns a clothing store in Tel Abyad, about 500 metres from the Turkish frontier, said he had not received any customers since Tuesday. US troops based in the town withdrew early on Monday after the White House announcement.

"All the shops around me are open, except that there are no people," Mohammed said in a telephone interview. "The only people heading to the marketplace today are those who need to buy food or things that are absolutely necessary. People who are out there in the streets look as if they are going to someone's funeral."

And the town itself was divided. Some residents supported the Syrian-Kurdish force, called the Syrian Democratic Forces (SDF), as it faced off against Turkey's military might. Others supported rebel groups backed by Turkey.

"We have people who were displaced from Afrin because of the Turkish invasion – they are worried that they will be displaced once again," he said, referring to Ankara's 2018 military offensive against a Kurdish enclave west of Tel Abyad.

"People are scared. When we used to see US troops in the streets of Tel Abyad, we would feel safe; they were here to protect us. Yesterday, we saw US troops, but this time they were on their way out of the area, and that terrified people," he said.