President Donald Trump told white supremacists the Proud Boys to ‘stand back and stand by’ when he was challenged to condemn them during Tuesday’s presidential debate but attacked antifa instead.

He claimed the protests in the country on race relations were a left-wing problem.

‘Proud Boys, stand back and stand by, but I tell you what, somebody has got to do something about antifa and the left because this is not a right wing problem, this is a left-wing problem,’ he said.

Proud Boys is a far-right and neo-fascist organization that admits only men as members and promotes and engages in political violence.  The group believes white men and western culture are under siege.

One member of the group tweeted their pride at being mentioned and said the president gave them permission for violence.

‘The Proud Boys are ecstatic tonight about getting mentioned in the debate tonight. “Trump basically said to go f*** them up! this makes me so happy,” writes one prominent Proud Boy,’ Mike Baker tweeted.

Joe Biden retweeted that person, writing: ‘This. This is Donald Trump’s America.’

It was one of many memorable moments in Tuesday’s chaotic first presidential debate where Trump, Biden, and moderator Chris Wallace shouted over one another throughout most of the 90 minutes.

Trump has been accused of being a racist after his defense of the Confederate Flag and his criticism of the Black Lives Matters protests that sprung up in the wake of George Floyd’s death – the Minnesota black man murdered by a white cop. 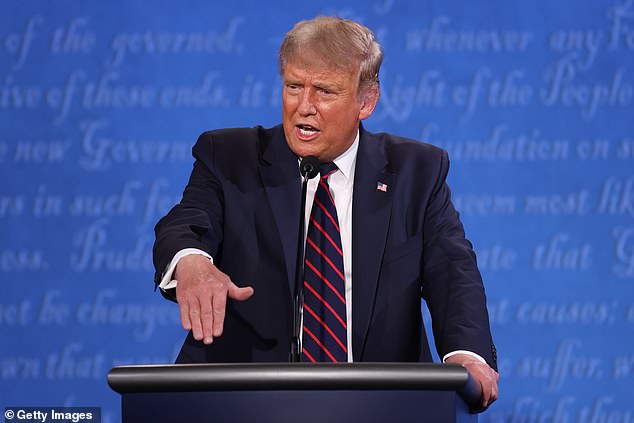 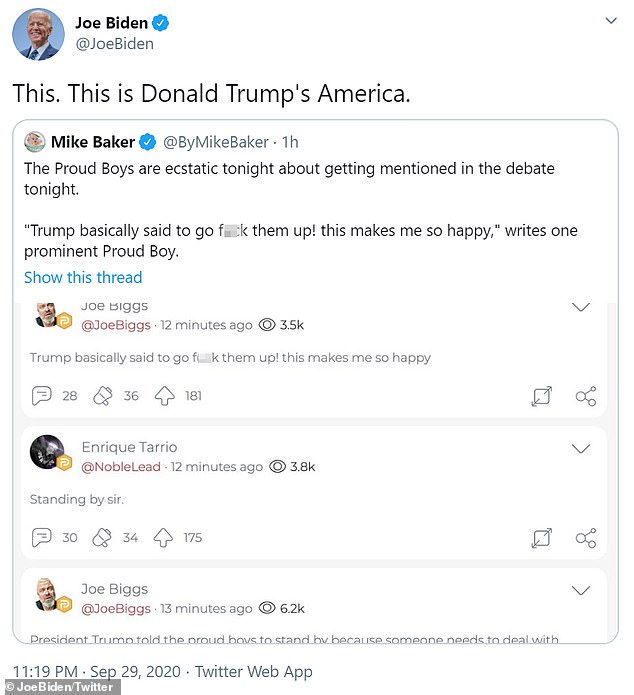 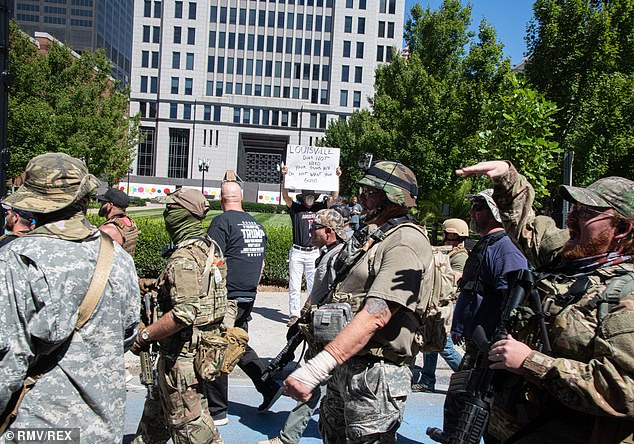 Debate moderator Chris Wallace asked the president if he would condemn white supremacists and militia groups.

‘I would say almost everything I see is from the left wing, not from the right wing,’ Trump said.

Wallace asked him to clarify what he meant.

‘I’m willing to do anything, I want to see peace,’ Trump said.

‘Then do it, sir,’ Wallace challenged.

‘Proud boys, stand back and stand by, but I tell you what, somebody has got to do something about antifa and the left because this is not a right wing problem, this is a left-wing problem,’ he said.

But antifa is not an organization – it’s a political idea that many different groups support. And law enforcement has found no evidence these groups were working with the Black Lives Matter protesters in cities across the United States.

Trump has declined to call out the citizen militias that have sprung up during the protests as he declined to do Tuesday night.

‘Antifa is an idea not an organization. His FBI director said,’ Biden said.

‘Antifa is a dangerous, radical,’ Trump started saying as Wallace interrupted him to say they were moving on to another topic.

But the president got in one last zinger on antifa: ‘They’ll overthrow you.’

Race relations, like other debate topics, resulted in a furious back-and-forth, shouting over each other conversation between the presidential contenders.

At one point in the night, Biden called Trump a ‘racist’ when the two men debated race relations in the country.

Trump was defending his decision to end racial sensitivity training for federal workers when his Democratic rival hit him with the ‘racist’ label.

The president said the training was resulting in ‘very sick ideas’ and teaching people ‘to hate our country.’

‘If you look at the people, we were paying people hundreds of thousands of dollars to teach very bad ideas and frankly, very sick ideas. It really, they were teaching people to hate our country. And I’m not going to do that. I’m not going to allow that to happen. We have to go back to the core values of this country,’ Trump said.

‘Nobody is doing that. He’s racist,’ Biden said.

He defended the training programs.

‘The fact is there is racial insensitivity. People have to be made aware of what other people feel like. What insults them, what is it demeaning to them. It’s important to people. Now, many people don’t want to hurt other people’s feelings, but it makes a big difference,’ he said.

And then he pivoted it to emphasize his blue-collar roots and hinted Trump is a snob.

As the two men bickered on race, Biden invoked the death of Floyd and the Black Lives Matter protests that sprung up in the wake. Trump invoked his ‘law and order’ presidency.

The president has accused Biden on multiple occasions of wanting to defund the police, which Biden has said he would not do.

During the debate, the Democratic nominee said most police officers are ‘good’ but the bad ones need to be rooted out.

‘The vast majority of police officers are good, they risk their lives every day to take care of us, but there are some bad apples and when they occur, when they find them they have to be sorted out,’ Biden said.

Trump hit back: ‘What is peaceful protest? When they run through the middle of the town and burn down stores and kill people all over the place? That is not peaceful protest.’

The president also has complained Biden hasn’t said he’s for ‘law and order,’ a phrase Trump has used to define his presidency.

But he attacked Trump’s approach of handling racial unrest across America.

‘The point is that is why he keeps trying to rile everything up. He doesn’t want to calm things down. Instead of going in and talking to people and saying let’s get everybody together, figure out how to deal with this, what does he do? He just throws gasoline on the fire constantly. Every single solitary time,’ he said.