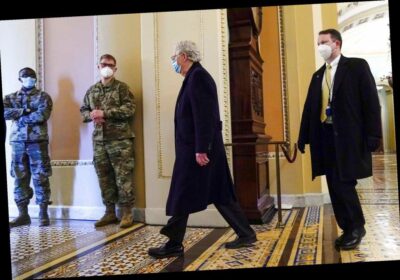 Trump impeachment trial: Day 4 schedule, time and how to watch

Trump impeachment trial: Day 3 schedule, time and how to watch

WASHINGTON — Former President Donald Trump’s lawyers are rebutting the case made by House impeachment managers as they take their turn to present arguments on day four of his trial.

The former president’s defense team has 16 hours to make their case but lead impeachment lawyer David Shoen said they would likely only use three to four hours to present their arguments.

This means that a vote on whether to convict or acquit the former president could come as early as Saturday evening if the chamber moves forward with the question and answer portion later Friday.

Many Republican lawmakers were unmoved by the two days of arguments made by House prosecutors which relied on dramatic, previously unseen footage to show how close rioters came to lawmakers when they stormed the Capitol on Jan. 6.

GOP senators said the impeachment managers failed to persuade them to convict former President Trump on the charge he incited the insurrection, suggesting Democrats will almost certainly fail to secure the 67 votes they need to convict.

The president’s legal team is expected to argue that Trump is innocent of the charge that he incited the insurrection and that Democrats stood idle while some of their own leaders called for violence against conservatives through the duration of the Trump administration and during last summer’s unrest.

“I think you’ll at least be moved by what you see and get a much better picture of what’s going on,” Schoen told Fox News in a preview of their arguments, adding he would expose the “hypocrisy” of the impeachment managers.

“Everyone in that room and the House will look bad,” he went on. “Our politicians will look bad if this thing goes forward and that’s a very unfortunate thing.”

If the defense wraps their case by Friday afternoon, the trial will then move to four hours of questions from senators before a four hour debate on whether to call witnesses.

Trump declined an invitation to testify and no other witnesses have been called. The chamber will then hear two hours of closing arguments from each side.

Forty-five Republican Senators last month voted that impeaching a former president is unconstitutional, with only one Republican switching positions since the trial began.

Democrats need 17 Republicans to cross the aisle and vote with them to impeach Trump to meet the two-thirds majority needed to convict, but it seems almost certain that the former president will be acquitted for a second time.