Trump brags about 'sold out' Ohio rally despite some empty seats 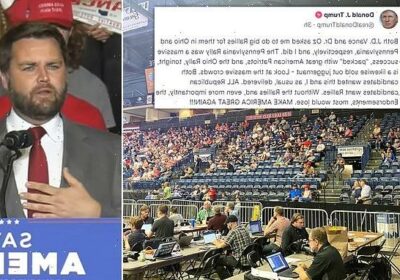 Donald Trump boasted about his ‘sold out’ Ohio rally in front of a ‘massive crowd’ on Saturday hours before taking the stage despite the fact that the 7,000- seat Covelli Centre in Youngstown uncharacteristically thin crowd come show time.

The ex-president made his claims via his Truth Social social media platform. Trump also said that most Republicans ‘would lose’ their races if not for his endorsement.

It’s worth noting that the rally is going on at the same time as a major college football game between Ohio State University and the University of Toledo.

The former president also said he’s in Ohio because he was asked to campaign there by Republican Senate candidate JD Vance, who is locked in a tight race against Democratic House Rep. Tim Ryan.

Vance told the crowd prior to Trump’s speech: ‘We need to get back to the policies of the real Donald Trump, not fake Tim Ryan pretending he’s someone he’s not.’

The Hillbilly Elegy author accused Ryan of lying to voters about his stance on certain issues including defunding the police. Ryan has stated that he does not support efforts to defund law enforcement.

The Democratic candidate has also accused Vance of being being in favor of defund the police efforts.

Vance took aim at Ryan’s stance on gas powered vehicles saying: ‘You should be able to drive whatever the hell car you want because this is America and we believe in freedom.’

He accused Ryan of pretending to be a moderate adding that the congressman ‘votes with Joe Biden 100 percent of the time.’

Vance added: ‘We need to kick DC Tim to the curb, make him go back home and get a real job for once.’ 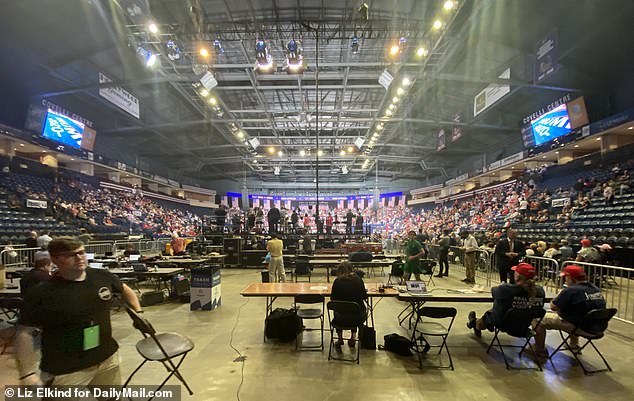 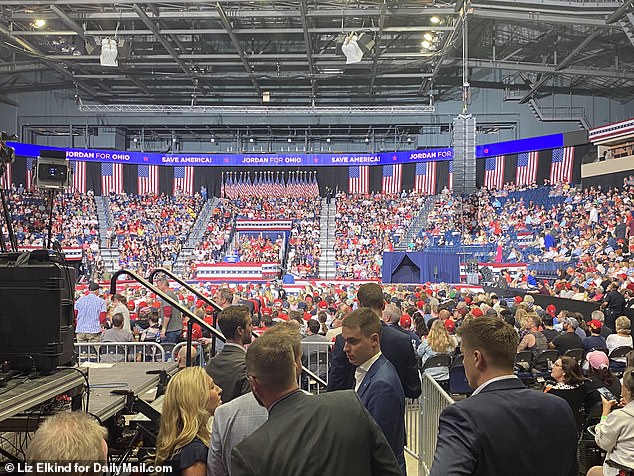 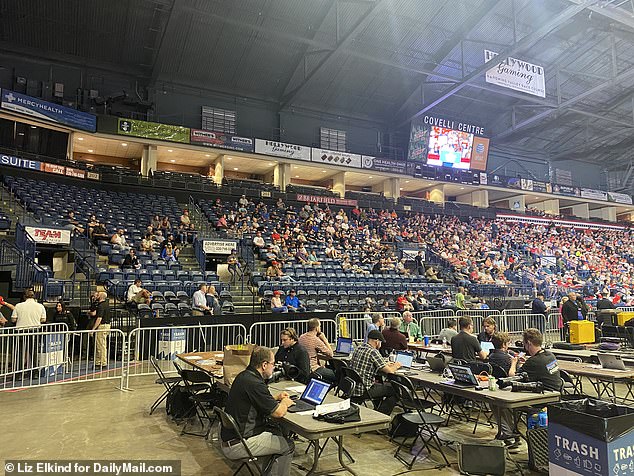 The stadium is about two-thirds full now, less than an hour before Trump is expected to take the stage

‘Both J.D. Vance and Dr. Oz asked me to do big Rallies for them in Ohio and Pennsylvania, respectively, and I did,’ Trump wrote in an earlier statement.

‘The Pennsylvania Rally was a massive success, ‘packed’ with great American Patriots, and the Ohio Rally, tonight, is a likewise sold out juggernaut – Look at the massive crowds.’

He added, ‘Both candidates wanted this and I, as usual, delivered. ALL Republican candidates want Rallies. Without the Rallies and, even more importantly, the Endorsements, most would lose. MAKE AMERICA GREAT AGAIN!!!’

Trump’s Congressional ally Rep. Marjorie Taylor Greene of Georgia joined a crowded list of speakers at the Saturday rally, where she got a standing ovation.

Trump has played a heavy hand in Ohio’s midterm races, endorsing 14 candidates for Congress or the governorship – more that he has in any other state save for Texas.

The 2020 presidential race saw Buckeye State voters choose Trump over President Joe Biden by a margin of about 8 percent.

Saturday’s rally is a test of his lingering influence in the critical battleground – joining Trump on stage will be all four Congressional hopefuls that he’s backed, as well as pro-Trump stalwart Reps. Jim Jordan and Bill Johnson.

As an added jab at the left-wing populist, Saturday’s rally is in Ryan’s current Congressional district.

Vance and Ryan are currently locked in a close race. A Friday poll from Emerson College Polling/The Hill had the ‘Hillbilly Elegy’ author leading Ryan by four percent.

But he’s wildly popular among Trump supporters, judging by the enthusiastic cheers when he took the stage on Saturday.

Also at Saturday night’s rally is Air Force veteran J.R. Majewski, who is vying to unseat vulnerable Democratic Rep. Marcy Kaptur in the 9th district. Majewski was present on the US Capitol grounds when a mob of Trump supporters overwhelmed law enforcement and stormed the building.

Notably absent is Ohio Governor Mike DeWine, whom Trump only recently endorsed despite the Republican leader disputing Trump’s claim that the 2020 presidential election was rigged.

Last year DeWine also defended Ohio Rep. Anthony Gonzalez for his vote to impeach Trump over the Capitol riot. ‘He made that call. That was his decision. I think he’s been a good member of Congress. He should not resign,’ DeWine said.

DeWine told the Youngstown Vindicator on Friday that he was missing the rally to watch his granddaughters participate in an evening cross country race event going on at the same time.