Home » Truck driver who hit pedestrians in Southbank gets bail

A Wyndham Vale truck driver who has been granted bail said he “felt a bump” during a collision which left two people seriously injured in Southbank on Thursday evening. 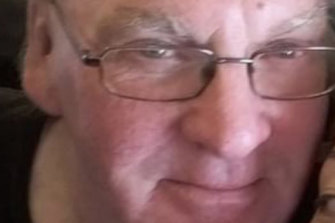 Police allege Mr Rogers was turning his B-double tanker left from City Road into Power Street on Thursday night when he mounted the kerb and hit a traffic light, which fell to the ground.

A group of four pedestrians and a food delivery driver – four men and a woman aged in their 20s and 30s – were injured in the incident and remain in hospital.

In CCTV footage of the incident shown in court on Saturday the pedestrians and delivery driver can be seen being hit by the backmost trailer of the truck as it mounted the kerb, with those injured falling on top of one another.

The truck did not stop and Mr Rogers returned the vehicle to his employer before returning to his home in Wyndham Vale, where he was arrested.

Police opposed bail for Mr Rogers saying he was an unacceptable risk of endangering the safety and welfare of other people.

Detective Leading Senior Constable Ben Oliver of the major collision investigation unit told the court that Mr Rogers made no attempts to stop the truck but due to the movement of the driver’s cabin, he would have had sufficient knowledge he had collided with something.

He said the way Mr Rogers turned the corner was a “reckless act in the circumstances” and police planned to lay more charges against Mr Rogers.

“The potential of those charges would depend on the outcome and the circumstances of the victims, and some continuing investigation of the [traffic] light cycle as it was applicable to the truck as it entered the intersection,” Senior Detective Oliver said. 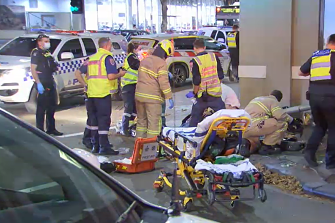 “It is caught on footage and it is certainly tragic five people have been seriously hurt,” Ms Gillahan told the court.

“The risks can be appropriately mitigated with conditions, such as him not driving trucks and he’s prepared to surrender his passport. His partner is overseas but he has obviously not seen her in some time.”

She told the court Mr Rogers had no prior criminal history.

Police prosecutor Sergeant Geoff Adams said while it was not likely the 64-year-old would reoffend or be a flight risk, police were concerned if he was able to get back behind the wheel.

“The intersection is not the danger, the person driving the truck has to drive appropriately,” Sergeant Adams told the court.

“Having the wheel sitting in the gutter, the back does not follow exactly where the front goes.”

Magistrate David Starvaggi granted bail noting that Rogers had no criminal priors, a stable address and there could be significant delays in the case.

He placed a condition on the 64-year-old’s bail that he not drive a vehicle of 4.5 tonnes or over or towing a trailer on any vehicle while on bail.

Mr Starvaggi it was clear the injuries resulting from the collision were “extremely serious and potentially life-threatening”.

Senior Detective Oliver said the 64-year-old had been driving trucks for more than 40 years, and had been freighting loads of chemicals for around 10 years.

Blood tests for drug and alcohol were taken from Mr Rogers, but the results will not be returned for at least two weeks.

Of the injured people, one man in his 20s remains at The Alfred hospital in a critical but stable condition in ICU, while another man aged in his 30s is at the Royal Melbourne Hospital in a serious condition after undergoing surgery on Friday night.

The three other pedestrians injured in the crash – a man in his 30s, a man in his 20s and a woman in her 20s with a broken femur – remain in hospital in a stable condition.

Anyone with information is urged to contact Crime Stoppers on 1800 333 000 or submit a confidential crime report at www.crimestoppersvic.com.au